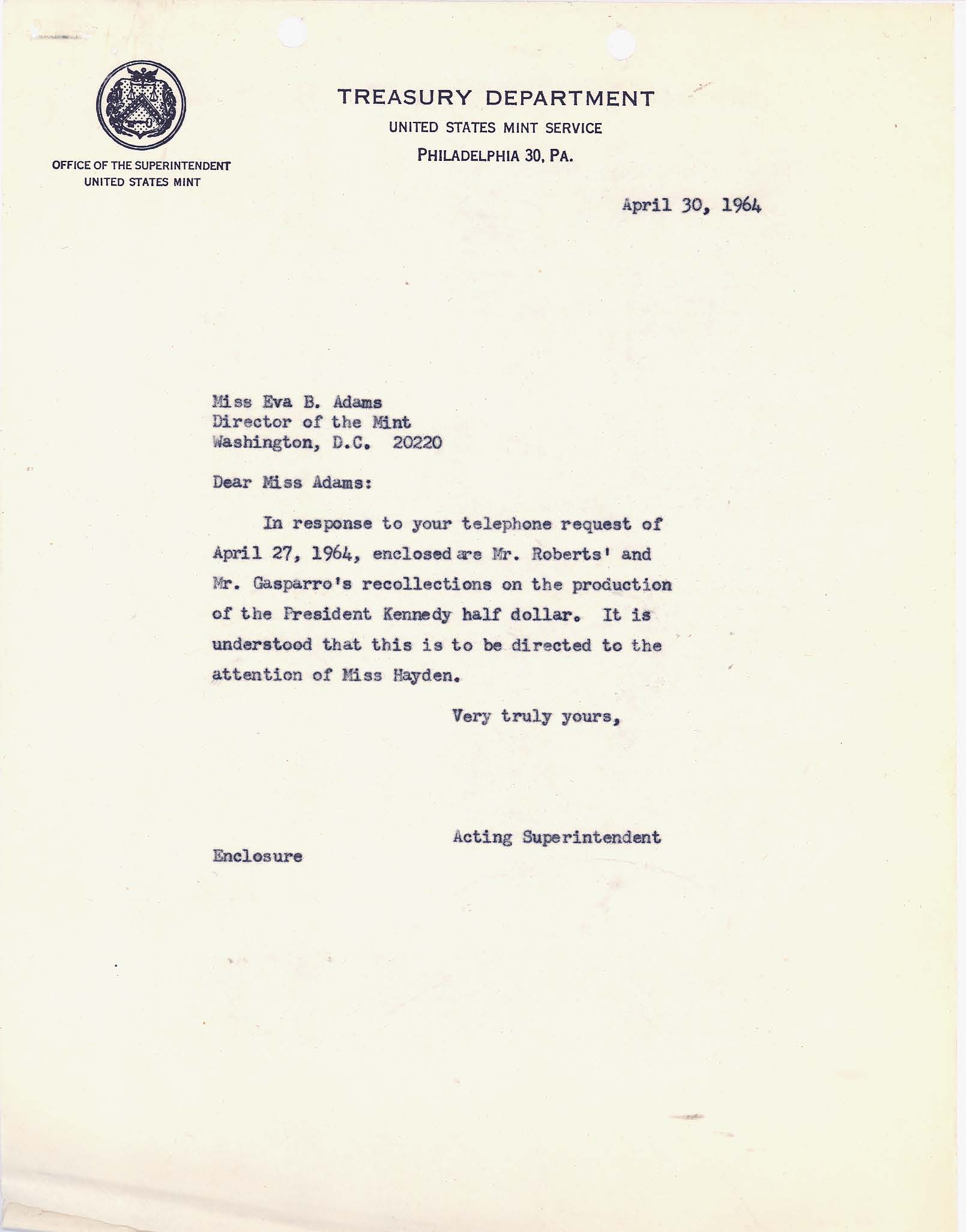 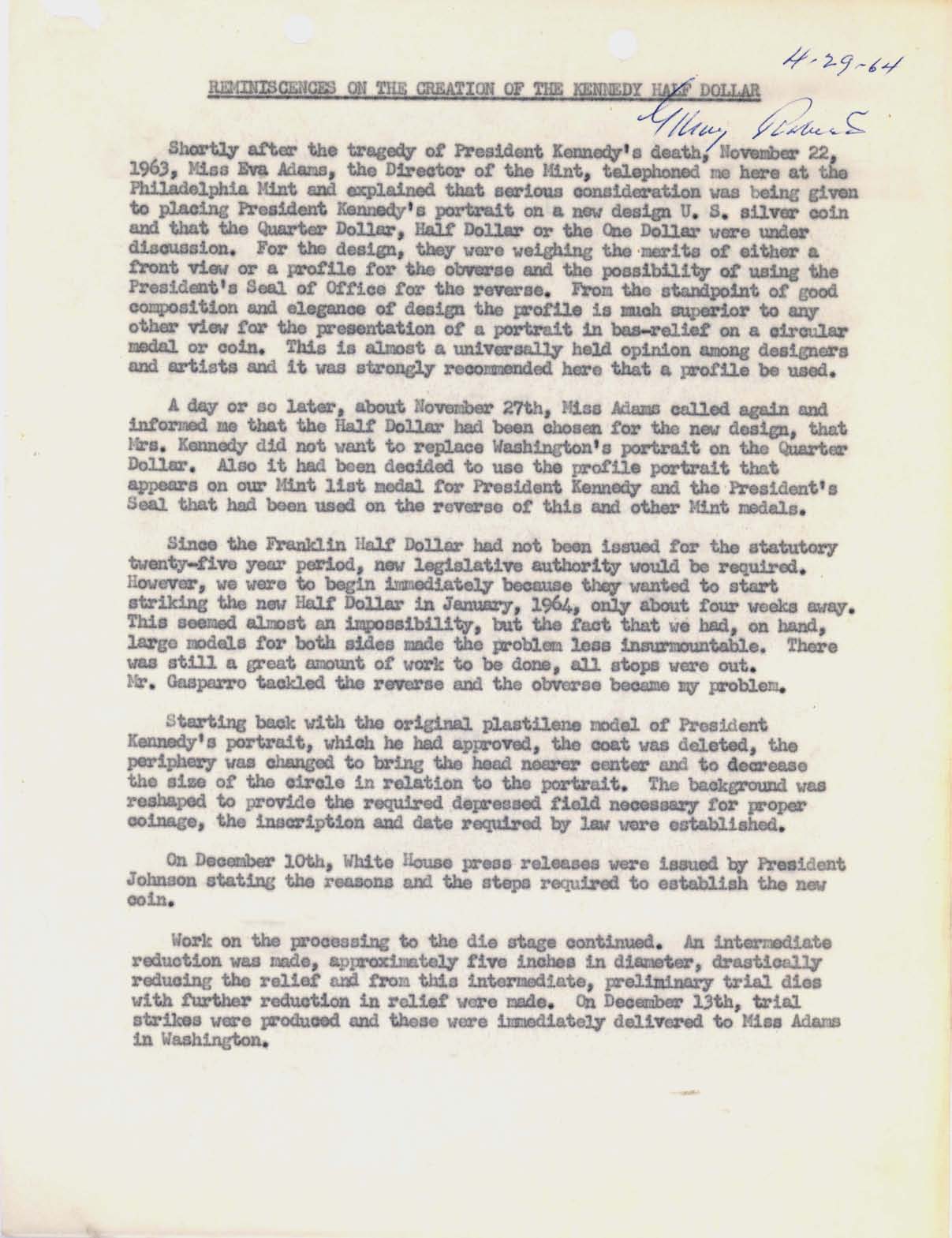 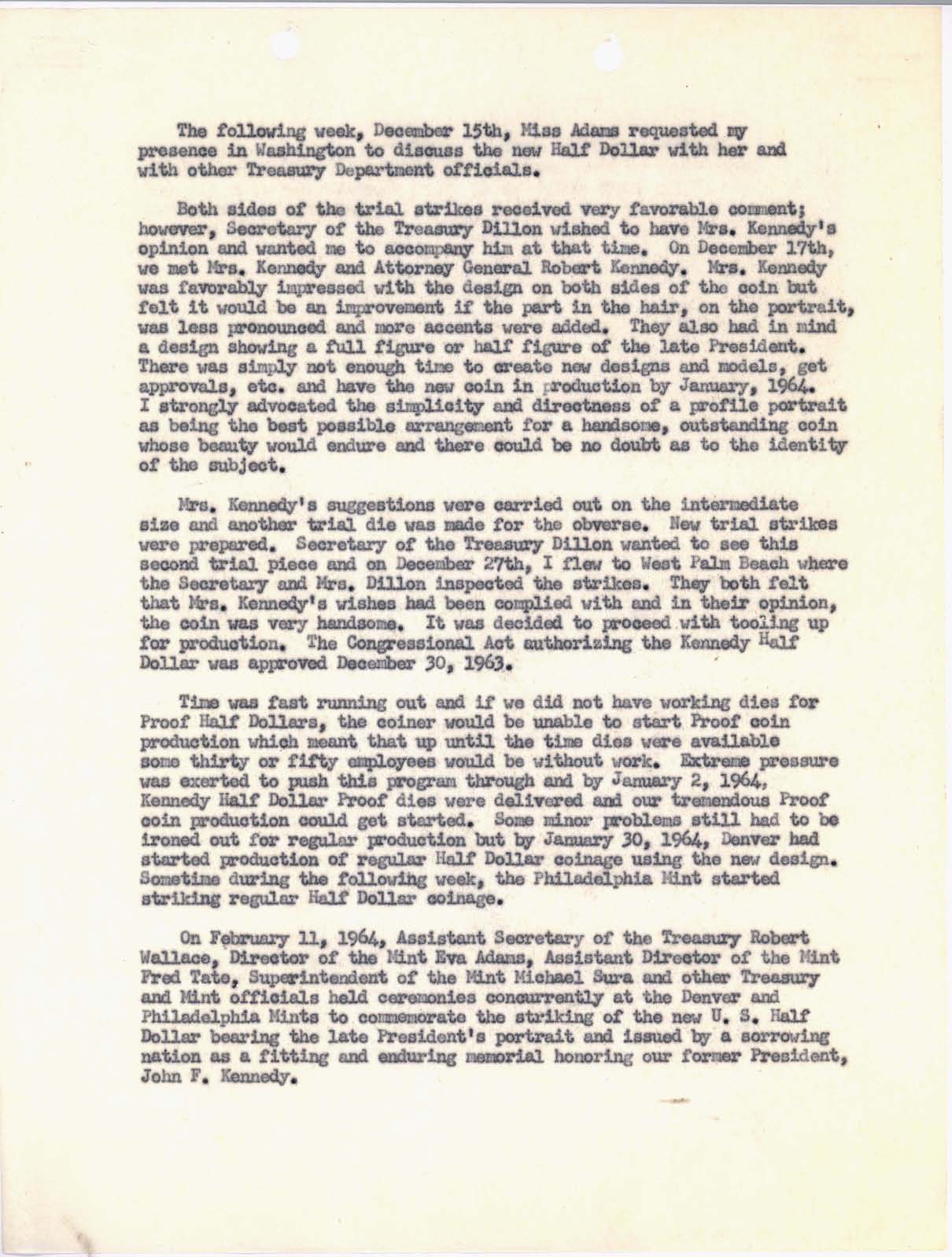 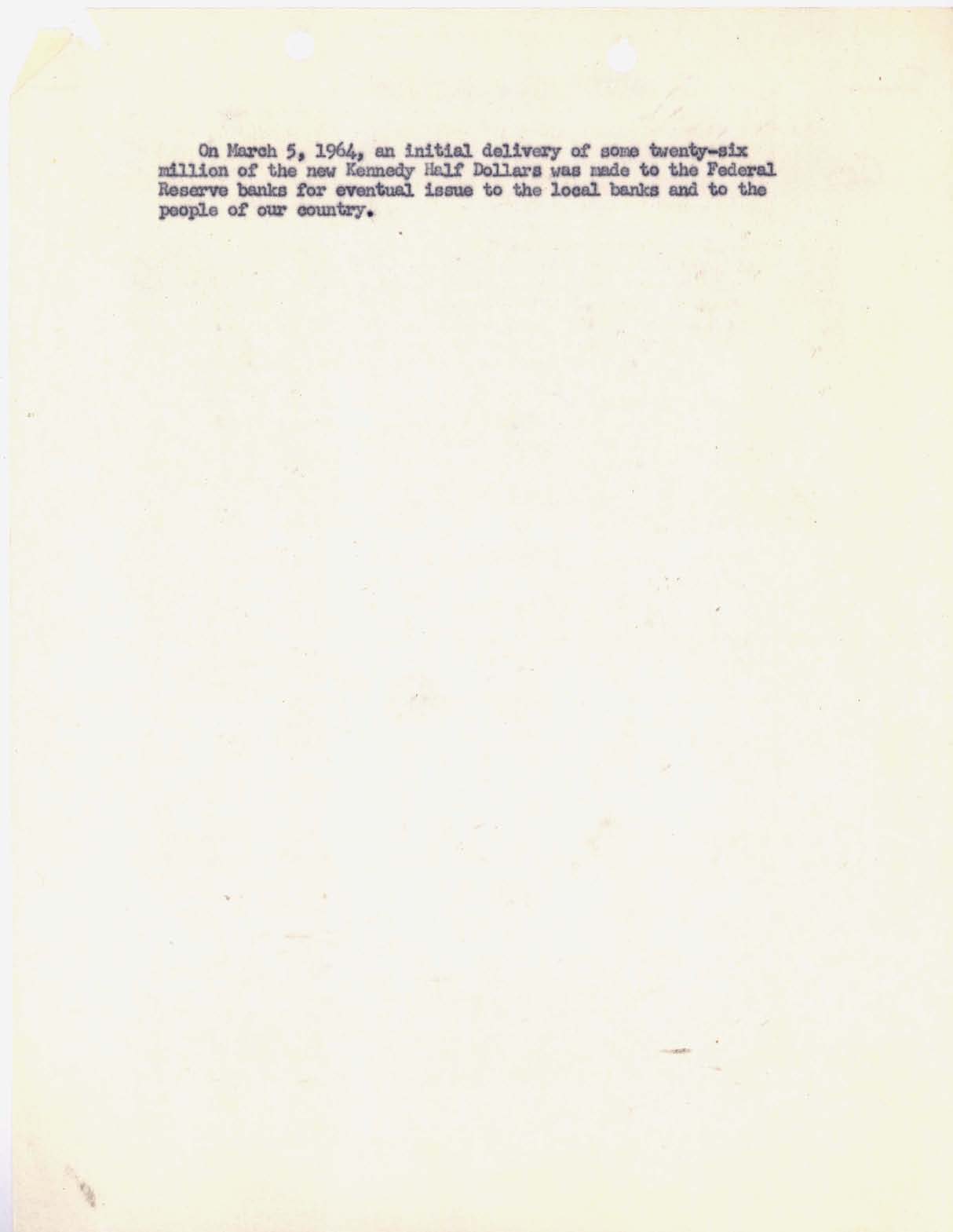 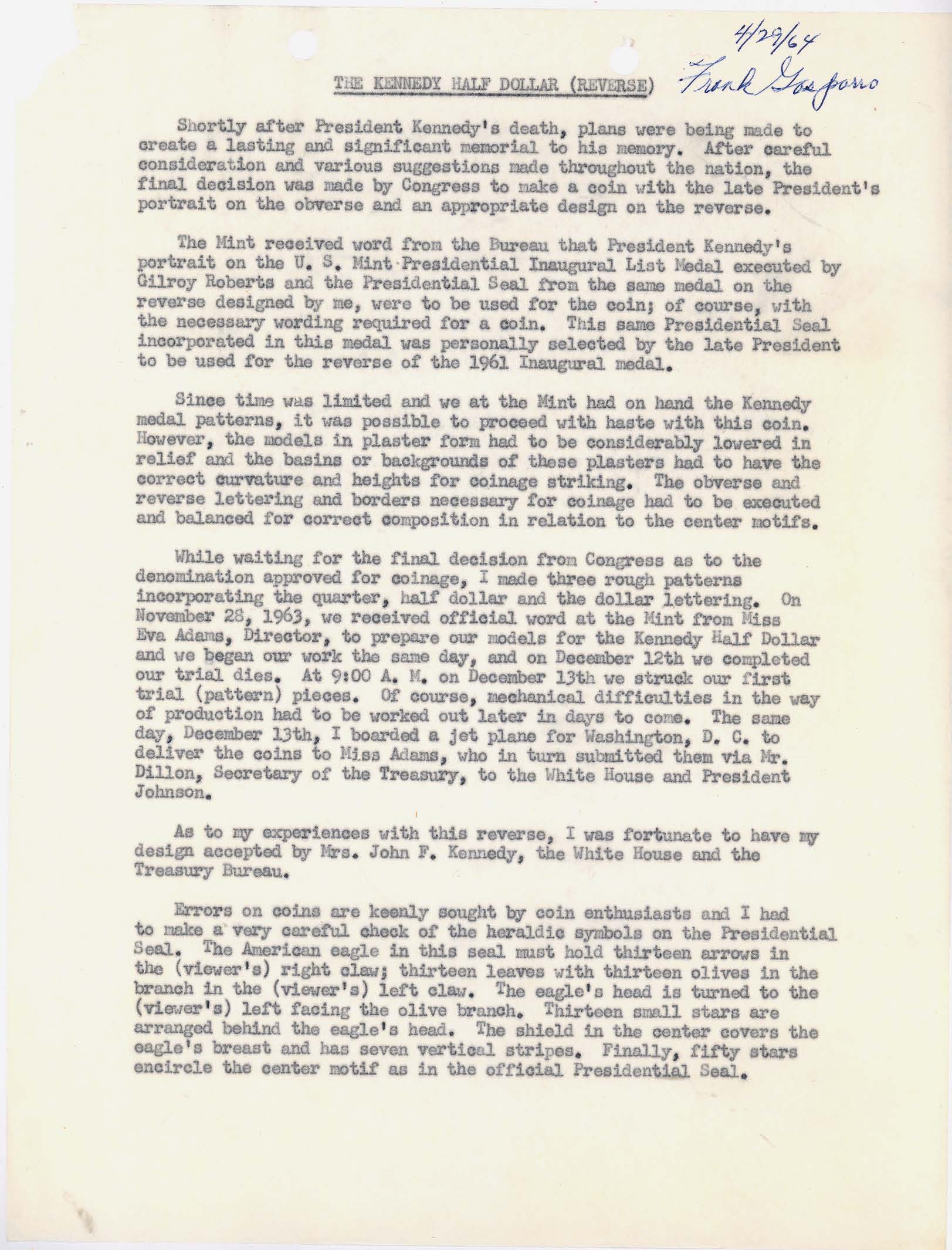 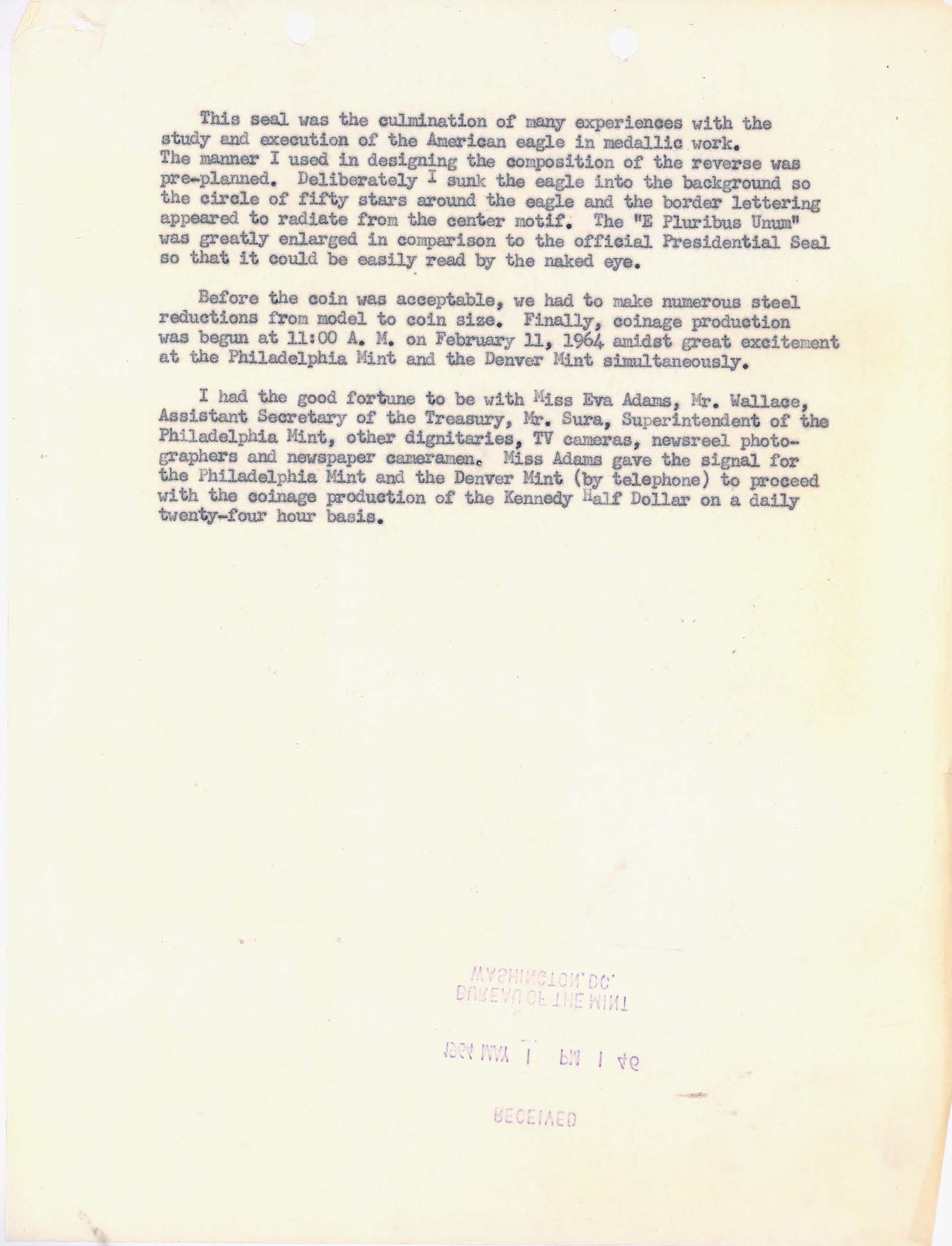 In response to your telephone request of April 27, 1964, enclosed are Mr. Roberts’ and Mr. Gasparro’s recollections on the production of the President Kennedy half dollar. It is understood that this is to be directed to the attention of Miss Hayden.

Reminiscences on the Creation of the Kennedy Half Dollar

Shortly after the tragedy of President Kennedy’s death, November 22, 1963, Miss Eva Adams, the Director of the Mint, telephoned me here at the Philadelphia Mint and explained that serious consideration was being given to placing President Kennedy’s portrait on a new design U. S. silver coin and that the Quarter Dollar, Half Dollar or the One Dollar were under discussion. For the design, they were weighing the merits of either a front view or a profile for the obverse and the possibility of using the President’s Seal of Office for the reverse. From the standpoint of good composition and elegance of design the profile is much superior to any other view for the presentation of a portrait in bas-relief on a circular medal or coin. This is almost a universally held opinion among designers and artists and it was strongly recommended here that a profile be used.

A day or so later, about November 27th, Miss Adams called again and informed me that the Half dollar had been chosen for the new design; that Mrs. Kennedy did not want to replace Washington’s portrait on the Quarter Dollar. Also it had been decided to use the profile portrait that appears on our Mint list medal for President Kennedy and the President’s Seal that had been used on the reverse of this and other Mint medals.

Since the Franklin Half Dollar had not been issued for the statutory twenty-five year period, new legislative authority would be required. However, we were to begin immediately because they wanted to start striking the new Half Dollar in January, 1964, only about four weeks away. This seemed almost an impossibility, but the fact that we had, on hand, large models for both sides made the problem less insurmountable. There was still a great amount of work to be done, all stops were out. Mr. Gasparro tackled the reverse and the obverse became my problem.

Starting back with the original plastilene model of President Kennedy’s portrait, which he had approved, the coat was deleted, the periphery was changed to bring the head nearer center and to decrease the size of the circle in relation to the portrait. The background was reshaped to provide the required depressed field necessary for proper coinage, the inscription and date required by law were established.

On December 10th, White House press releases were issued by President Johnson stating the reasons and the steps required to establish the new coin.

Work on the processing to the die stage continued. An intermediate reduction was made, approximately five inches in diameter, drastically reducing the relief and from this intermediate, preliminary trial dies with further reduction in relief were made. On December 13th, trial strikes were produced and these were immediately delivered to Miss Adams in Washington.

The following week, December 15th, Miss Adams requested my presence in Washington to discuss the new Half Dollar with her and with other Treasury Department officials.

Both sides of the trial strikes received very favorable comment; however, Secretary of the Treasury Dillon wished to have Mrs. Kennedy’s opinion and wanted me to accompany him at that time. On December 17th, we met Mrs. Kennedy and Attorney General Robert Kennedy. Mrs. Kennedy was favorably impressed with the design on both sides of the coin but felt it would be an improvement if the part in the hair, on the portrait, was less pronounced and more accents were added. They also had in mind a design showing a full figure or half figure of the late President. There was simply not enough time to create new designs and medals, get approvals, etc. and have the new coin in production by January, 1964. I strongly advocated the simplicity and directness of a profile portrait as being the best possible arrangement for a handsome, outstanding coin whose beauty would endure and there could be no doubt as to the identity of the subject.

Mrs. Kennedy’s suggestions were carried out on the intermediate size and another trial die was made for the obverse. New trial strikes were prepared. Secretary of the Treasury Dillon wanted to see this second trial piece and on December 27th, I flew to West Palm Beach where the Secretary and Mrs. Dillon inspected the strikes. They both felt that Mrs. Kennedy’s wishes had been complied with and in their opinion, the coin was very handsome. It was decided to proceed with tooling up for production. The Congressional Act authorizing the Kennedy Half Dollar was approved December 30, 1963.

Time was fast running out and if we did not have working dies for Proof Half Dollars, the coiner would be unable to start Proof coin production which meant that up until the time dies were available some thirty or fifty employees would be without work. Extreme pressure was exerted to push this program through and by January 2, 1964, Kennedy Half Dollar Proof dies were delivered and our tremendous Proof coin production could get started. Some minor problems still had to be ironed out for regular production but by January 30, 1964, Denver had started production of regular Half Dollar coinage using the new design. Sometime during the following week, the Philadelphia Mint started striking regular Half Dollar coinage.

On February 11, 1964, Assistant Secretary of the Treasury Robert Wallace, Director of the Mint Eva Adams, Assistant Director of the Mint Fred Tate, Superintendent of the Mint Michael Sura and other Treasury and Mint officials held ceremonies concurrently at the Denver and Philadelphia Mints to commemorate the striking of the new U.S. Half Dollar bearing the late President’s portrait and issued by a sorrowing nation as a fitting and enduring memorial honoring our former President, John F. Kennedy.

On March 5, 1964, an initial delivery of some twenty-six million of the new Kennedy Half Dollars was made to the Federal Reserve banks for eventual issue to the local banks and to the people of our country.

The Kennedy Half Dollar (Reverse)

Shortly after President Kennedy’s death, plans were being made to create a lasting and significant memorial to his memory. After careful consideration and various suggestions made throughout the nation, the final decision was made by Congress to make a coin with the late President’s portrait on the obverse and an appropriate design on the reverse.

Since time was limited and we at the Mint had on hand the Kennedy medal patterns, it was possible to proceed with haste with this coin. However, the models in plaster form had to be considerably lowered in relief and the basins or backgrounds of these plasters had to have the correct curvature and heights for coinage striking. The obverse and reverse lettering and borders necessary for coinage had to be executed and balanced for correct composition in relation to the center motifs.

While waiting for the final decision from Congress as to the denomination approved for coinage, I made three rough patterns incorporating the quarter, half dollar and the dollar lettering. On November 28, 1963, we received official word at the Mint from Miss Eva Adams, Director, to prepare our models for the Kennedy Half Dollar and we began our work the same day, and on December 12th we completed our trial dies. At 9:00 A.M. on December 13th we struck our first trial (pattern) pieces. Of course, mechanical difficulties in the way of production had to be worked out later in days to come. The same day, December 13th, I boarded a jet plane for Washington, D.C. to deliver the coins to Miss Adams, who in turn submitted them via Mr. Dillon, Secretary of the Treasury, to the White House and President Johnson.

As to my experience with this reverse, I was fortunate to have my design accepted by Mrs. John F. Kennedy, the White House and the Treasury Bureau.

Errors on coins are keenly sought by coin enthusiasts and I had to make a very careful check of the heraldic symbols on the Presidential Seal. The American eagle in this seal must hold thirteen arrows in the (viewer’s) right claw; thirteen leaves with thirteen olives in the branch in the (viewer’s) left claw. The eagle’s head is turned to the (viewer’s) left facing the olive branch. Thirteen small stars are arranged behind the eagle’s head. The shield in the center covers the eagle’s breast and has seven vertical stripes. Finally, fifty stars encircle the center motif as in the official Presidential Seal.

This seal was the culmination of many experiences with the study and execution of the American eagle in medallic work. The manner I used in designing the composition of the reverse was pre-planned. Deliberately I sunk the eagle into the background so the circle of fifty stars around the eagle and the border lettering appeared to radiate from the center motif. The “E Pluribus Unum” was greatly enlarged in comparison to the official Presidential Seal so that it could be easily read by the naked eye.

Before the coin was acceptable, we had to make numerous steel reductions from model to coin size. Finally, coinage production was begun at 11:00 A.M. on February 11, 1964 amidst great excitement at the Philadelphia Mint and the Denver Mint simultaneously.

I had the good fortune to be with Miss Eva Adams, Mr. Wallace, Assistant Secretary of the Treasury, Mr. Sura, Superintendent of the Philadelphia Mint, other dignitaries, TV cameras, newsreel photographers and newspaper cameramen. Miss Adams gave the signal for the Philadelphia Mint and the Denver Mint (by telephone) to proceed with the coinage production of the Kennedy Half Dollar on a daily twenty-four hour basis.