Mint Facilities to Curtail Use of National Gas 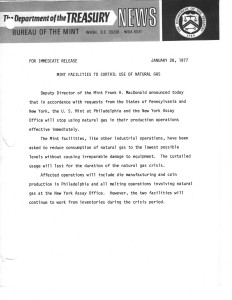 Deputy Director of the Mint Frank H. MacDonald announced today that in accordance with requests from the States of Pennsylvania and New York, the U.S. Mint at Philadelphia and the New York Assay Office will stop using gas in their production operations effective immediately.

The Mint facilities, like other industrial operations, have been asked to reduce consumption of natural gas to the lowest possible levels without causing irreparable damage to equipment. The curtailed usage will last for the duration of the natural gas crisis.

Affected operations will include die manufacturing and coin production in Philadelphia and all melting operations involving natural gas at the New York Assay Office. However, the two facilities will continue to work from inventories during the crisis period.