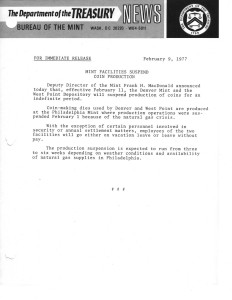 Deputy Director of the Mint Frank H. MacDonald announced today that, effective February 11, the Denver Mint and the West Point Depository will suspend production of coins for an indefinite period.

Coin-making dies used by Denver and West Point are produced at the Philadelphia Mint where production operations were suspended February 1 because of the natural gas crisis.

With exception of certain personnel involved in security or annual settlement matters, employees of the two facilities will go either on vacation leave or leave without pay.

The production suspension is expected to run from three to six weeks depending on weather conditions and availability of natural gas supplies in Philadelphia.