Mint of the United States at San Francisco, Cal. 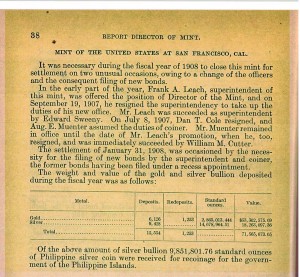 It was necessary during the fiscal year of 1908 to close this mint for settlement on two unusual occasions, owing to a change of the officers and the consequent filing of new bonds.

In the early part of the year, Frank A. Leach, superintendent of this mint, was offered the position of Director of the Mint, and on September 19, 1907, he resigned the superintendency to take up the duties of his new office. Mr. Leach was succeeded as superintendent by Edward Sweeny. On July 8, 1907, Dan T. Cole resigned, and Aug. E. Muenter assumed the duties of coiner. Mr. Muenter remained in office until the date of Mr. Leach’s promotion, when he, too, resigned, and was immediately succeeded by William M. Cutter.

The settlement of January 31, 1908, was occasioned by the necessity for the filing of new bonds by the superintendent and coiner, the former bonds having been filed under a recess appointment.

The weight and value of the gold and silver bullion deposited during the fiscal year was as follows:

Of the above amount of silver bullion 9,851,801.76 standard ounces of Philippine silver coin were received for recoinage for the government of the Philippine Islands.