Mint Resumes Production of Half Dollars for Circulation 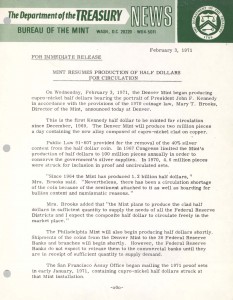 On Wednesday, February 3, 1971, the Denver Mint began producing cupro-nickel half dollars bearing the portrait of President John F. Kennedy in accordance with the provisions of the 1970 coinage law, Mary T. Brooks, Director of the Mint, announced today at Denver.

This is the first Kennedy half dollar to be minted for circulation since December, 1969. The Denver Mint will produce two million pieces a day containing the new alloy composed of cupro-nickel clad on copper.

Public Law 91-607 provided for the removal of the 40% silver content from the half dollar coin. In 1967 Congress limited the Mint’s production of half dollars to 100 million pieces annually in order to conserve the government’s silver supplies. In 1970, 4.6 million pieces were struck for inclusion in proof and uncirculated sets.

“Since 1964 the Mint has produced 1.2 billion half dollars,” Mrs. Brooks said. “Nevertheless, there has been a circulation shortage of the coin because of the sentiment attached to it as well as hoarding for bullion content and numismatic reasons.”

Mrs. Brooks added that “the Mint plans to produce the clad half dollars in sufficient quantity to supply the needs of all the Federal Reserve Districts and I expect the composite half dollar to circulate freely in the market place.”

The Philadelphia Mint will also begin producing half dollars shortly. Shipments of the coins from the Denver Mint to the 36 Federal Reserve Banks and branches will begin shortly. However, the Federal Reserve Banks do not expect to release them to the commercial banks until they are in receipt of sufficient quantity to supply demand.