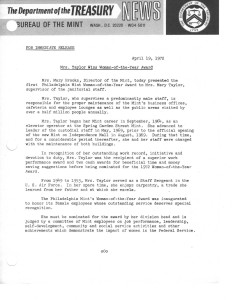 Mrs. Taylor, who supervises a predominantly male staff, is responsible for the proper maintenance of the Mint’s business offices, cafeteria and employee lounges as well as the public areas visited by over a half million people annually.

Mrs. Taylor began her Mint career in September, 1964, as an elevator operator at the Spring Garden Street Mint. She advanced to leader of the custodial staff in May, 1969, prior to the official opening of the new Mint on Independence Mall in August, 1969. During that time, and for a considerable period thereafter, she and her staff were charged with the maintenance of both buildings.

In recognition of her outstanding work record, initiative and devotion to duty, Mrs. Taylor was the recipient of a superior work performance award and two cash awards for beneficial time and money saving suggestions before being nominated for the 1972 Woman-of-the-Year Award.

From 1949 to 1953, Mrs. Taylor served as a Staff Sergeant in the U.S. Air Force. In her spare time, she enjoys carpentry, a trade she learned from her father and at which she excels.

She must be nominated for the award by her division head and is judged by a committee of Mint employees on job performance, leadership, self-development, community and social service activities and other achievements which demonstrate the impact of women in the Federal Service.