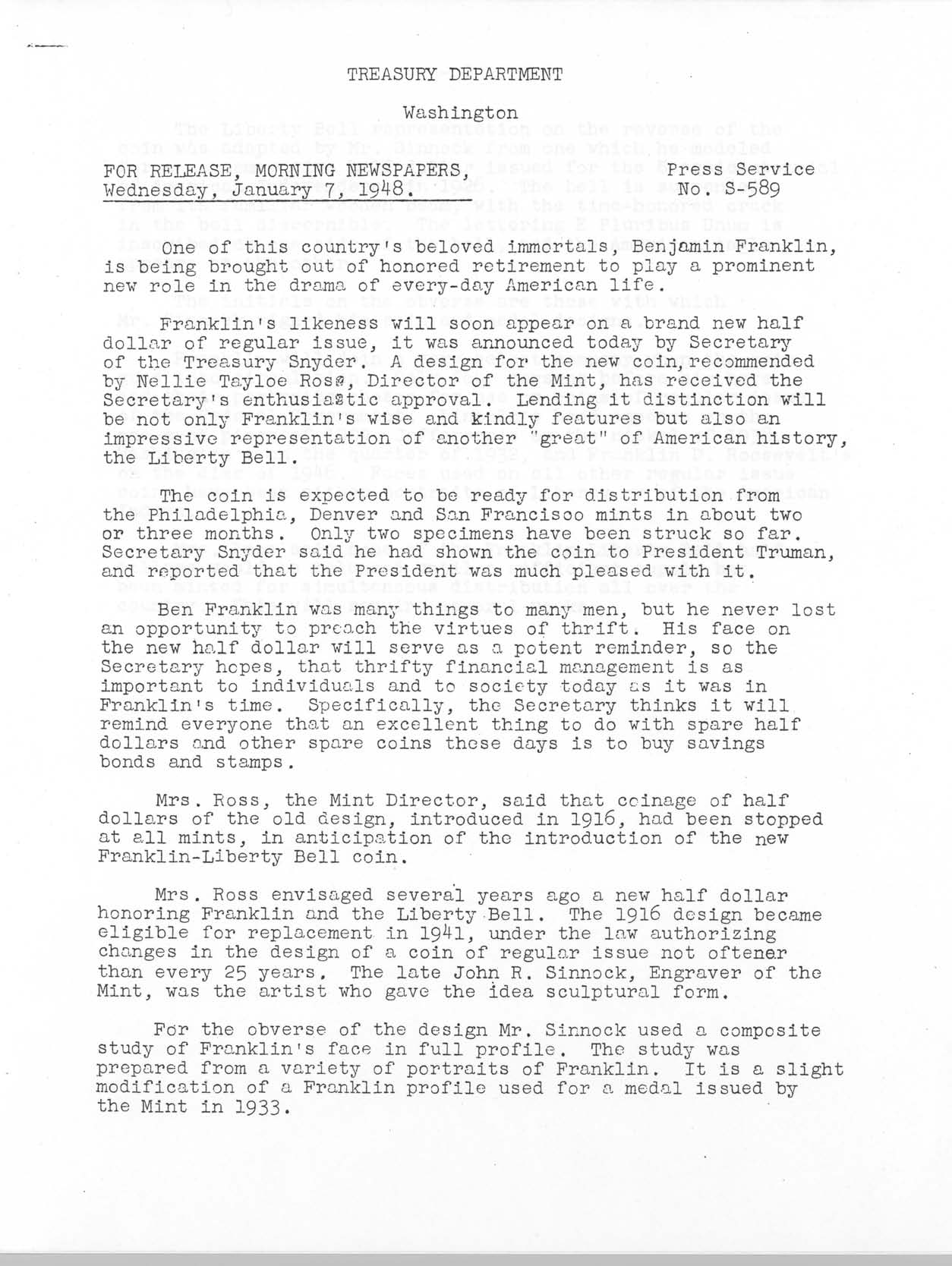 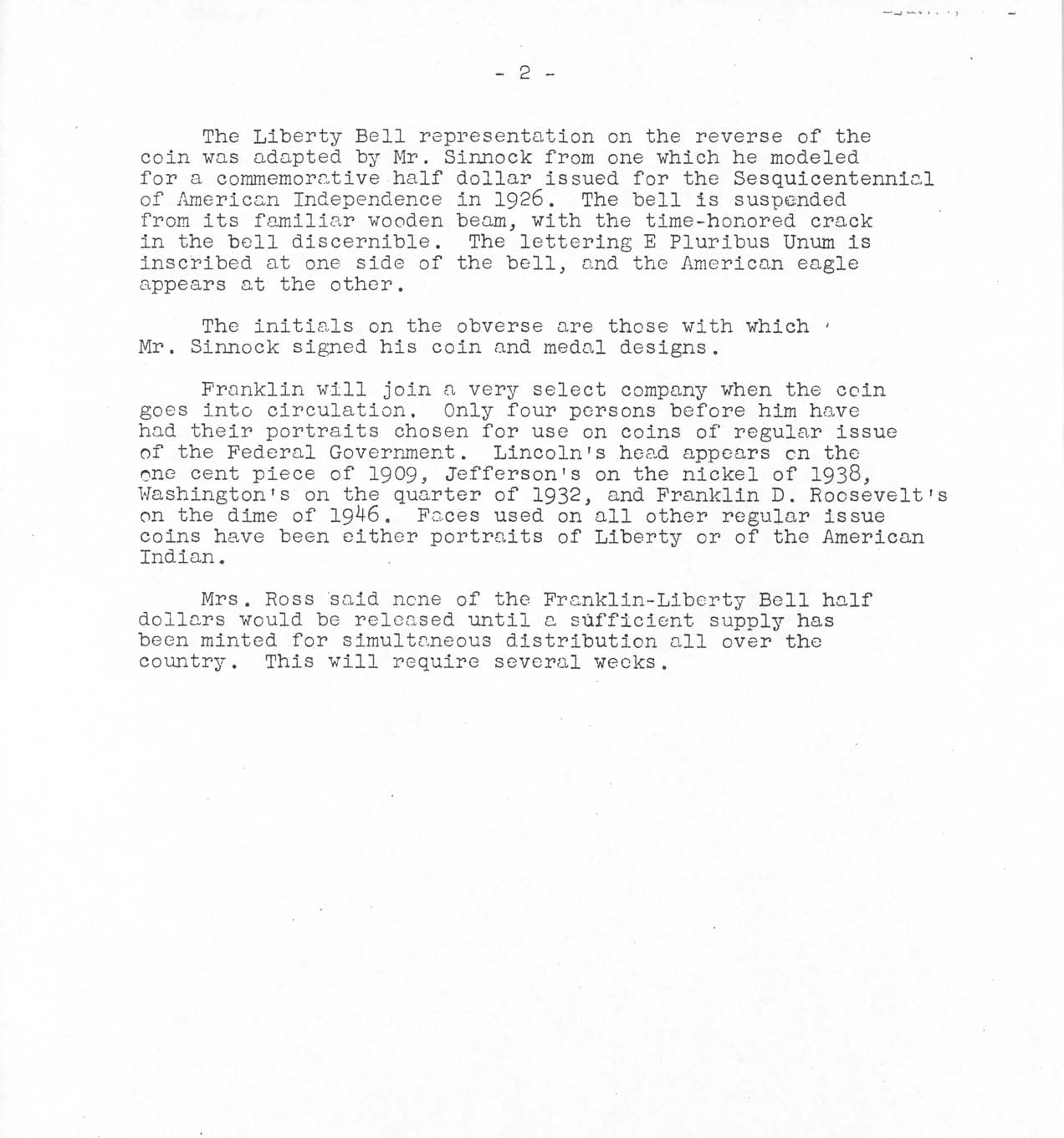 One of this country’s beloved immortals, Benjamin Franklin, is being brought out of honored retirement to play a prominent new role in the drama of every-day American life.

Franklin’s likeness will soon appear on a brand new half dollar of regular issue, it was announced today by Secretary of the Treasury Snyder. A design for the new coin, recommended by Nellie Tayloe Ross, Director of the Mint, has received the Secretary’s enthusiastic approval. Lending it distinction will be not only Franklin’s wise and kindly features but also an impressive representation of another “great” of American history, the Liberty Bell.

The coin is expected to be ready for distribution from Philadelphia, Denver and San Francisco mints in about two or three months. Only two specimens have been struck so far. Secretary Snyder said he had shown the coin to President Truman, and reported that the President was much pleased with it.

Ben Franklin was many things to many men, but he never lost an opportunity to preach the virtues of thrift. His face on the new half dollar will serve as a potent reminder, so the Secretary hopes, that thrifty financial management is as important to individuals and to society today as it was in Franklin’s time. Specifically, the Secretary thinks it will remind everyone that an excellent thing to do with spare half dollars and other spare coins these days is to buy savings bonds and stamps.

Mrs. Ross, the Mint Director, said that coinage of half dollars of the old design, introduced in 1916, had been stopped at all mints, in anticipation of the introduction of the new Franklin-Liberty Bell coin.

Mrs. Ross envisaged several years ago a new half dollar honoring Franklin and the Liberty Bell. The 1916 design became eligible for replacement in 1941, under the law authorizing changes in the design of a coin of regular issue not oftener than every 25 years. The late John R. Sinnock, Engraver of the Mint, was the artist who gave the idea sculptural form.

For the obverse of the design Mr. Sinnock used a composite study of Franklin’s face in full profile. The study was prepared from a variety of portraits of Franklin. It is a slight modification of a Franklin profile used for a medal issued by the Mint in 1933.

The Liberty Bell representation on the reverse of the coin was adapted by Mr. Sinnock from one which he modeled for a commemorative half dollar issued for the Sesquicentennial of American Independence in 1926. The bell is suspended from its familiar wooden beam, with the time-honored crack in the bell discernible. The lettering E Pluribus Unum is inscribed at one side of the bell, and the American eagle appears at the other.

The initials on the obverse are those with which Mr. Sinnock signed his coin and medal designs.

Franklin will join a very select company when the coin goes into circulation. Only four persons before him have had their portraits chosen for use on coins of regular issue of the Federal Government. Lincoln’s head appears on the one cent piece of 1909, Jefferson’s on the nickel of 1938, Washington’s on the quarter of 1932, and Franklin D. Roosevelt’s on the dime of 1946. Faces used on all other regular issue coins have been either portraits of Liberty or of the American Indian.

Mrs. Ross said none of the Franklin-Liberty Bell half dollars would be released until a sufficient supply has been minted for simultaneous distribution all over the country. This will require several weeks.