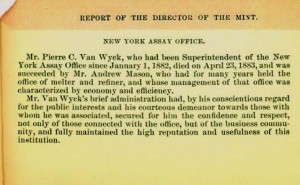 Mr. Pierre C. Van Wyck, who had been Superintendent of the New York Assay Office since January 1, 1882, died on April 23, 1883, and was succeeded by Mr. Andrew Mason, who had for many years held the office of melter and refiner, and whose management of that office was characterized by economy and efficiency.

Mr. Van Wyck’s brief administration had, by his conscientious regard for the public interests and his courteous demeanor towards those with whom he was associated, secured for him the confidence and respect, not only of those connected with the office, but of the business community, and fully maintained the high reputation and usefulness of this institution.