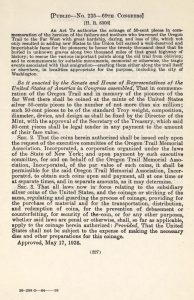 An Act To authorize the coinage of silver 50-cent pieces in commemoration of the heroism of the fathers and mothers who traversed the Oregon Trail to the Far West with great hardship, daring, and loss of life, which not only resulted in adding new States to the Union but earned a well-deserved and imperishable fame for the pioneers; to honor the twenty thousand dead that lie buried in unknown graves along two thousand miles of that great highway of history; to rescue the various important points along the old trail from oblivion; and to commemorate by suitable monuments, memorial or otherwise, the tragic events associated with that emigration—erecting them either along the trail itself or elsewhere, in localities appropriate for the purpose, including the city of Washington.

Be it enacted by the Senate and House of Representatives of the United States of America in Congress assembled, That in commemoration of the Oregon Trail and in memory of the pioneers of the far West there shall be coined at the mints of the United States silver 50-cents pieces to the number of not more than six million; such 50-cent pieces to be of the standard Troy weight, composition, diameter, device, and design as shall be fixed by the Director of the Mint, with the approval of the Secretary of the Treasury, which said 50-cent pieces shall be legal tender in any payment to the amount of their face value.

SEC. 3. That all laws now in force relating to the subsidiary silver coins of the United States, and the coinage or striking of the same, regulating and guarding the process of coinage, providing for the purchase of material and for the transportation, distribution, and redemption of coins, for the prevention of debasement or counterfeiting, for security of the coin, or for any other purposes, whether said laws are penal or otherwise, shall, so far as applicable, apply to the coinage herein authorized: Provided, That the United States shall not be subject to the expense of making the necessary dies and other preparations for this coinage.