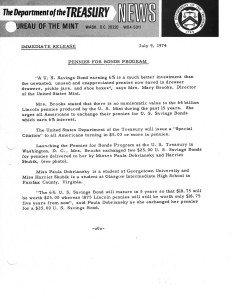 Mrs. Brooks stated that there is no numismatic value to the 64 billion Lincoln pennies produced by the U.S. Mint during the past 15 years. She urges all Americans to exchange their pennies for U.S. Saving Bonds which earn 6% interest.

The United States Department of the Treasury will issue a “Special Citation” to all Americans turning in $5.00 or more in pennies.