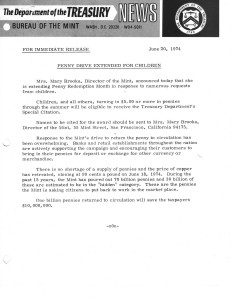 Mrs. Mary Brooks, Director of the Mint, announced today that she is extending Penny Redemption Month in response to numerous requests from children.

Children, and all others, turning in $5.00 or more in pennies through the summer will be eligible to receive the Treasury Department’s Special Citation.

Names to be cited for the award should be sent to Mrs. Mary Brooks, Director of the Mint, 55 Mint Street, San Francisco, California 94175.

Response to the Mint’s drive to return the penny to circulation has been overwhelming. Banks and retail establishments throughout the nation are actively supporting the campaign and encouraging their customers to bring in their pennies for deposit or exchange for other currency or merchandise.

There is no shortage of a supply of pennies and the price of copper has retreated, closing at 99 cents a pound on June 18, 1974. During the past 15 years, the Mint has poured out 70 billion pennies and 30 billion of these are estimated to be in the “hidden” category. These are the pennies the Mint is asking citizens to put back to work in the market place.

One billion pennies returned to circulation will save the taxpayers $10,000,000.