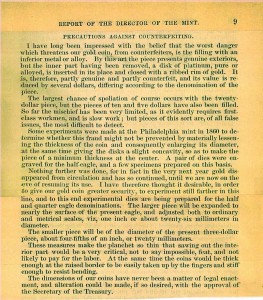 I have long been impressed with the belief that the worst danger which threatens our gold coin, from counterfeiters, is the filling with an inferior metal or alloy. By this art the piece presents genuine exteriors, but the inner part having been removed, a disk of platinum, pure or alloyed, is inserted in its place and closed with a ribbed rim of gold. It is, therefore, partly genuine and partly counterfeit, and its value is reduced by several dollars, differing according to the denomination of the piece.

The largest chance of spoliation of course occurs with the twenty-dollar piece, but the pieces of ten and five dollars have also been filled. So far the mischief has been very limited, as it evidently requires first-class workmen, and is slow work; but pieces of this sort are, of all false issues, the most difficult to detect.

Some experiments were made at the Philadelphia mint in 1860 to determine whether this fraud might not be prevented by materially lessening the thickness of the coin and consequently enlarging its diameter, at the same time giving the disks a slight concavity, so as to make the piece of a minimum thickness at the center. A pair of dies were engraved for the half-eagle, and a few specimens prepared on this basis.

Nothing further was done, for in fact in the very next year gold disappeared from circulation and has so continued, until we are now on the eve of resuming its use. I have therefore thought it desirable, in order to give our gold coin greater security, to experiment still farther in this line, and to this end experimental dies are being prepared for the half and quarter eagle denominations. The larger piece will be expanded to nearly the surface of the present eagle, and adjusted both to ordinary and metrical scales, viz, one inch or about twenty-six millimeters in diameter.

The smaller piece will be of the diameter of the present three-dollar piece, about four-fifths of an inch, or twenty millimeters.

These measures make the planchet so thin that sawing out the interior part would be a very critical, not to say impossible, feat, and not likely to pay for the labor. At the same time the coins would be thick enough at the raised border to be easily taken up by the fingers and stiff enough to resist bending.

The dimensions of our coins have never been a matter of legal enactment, and alteration could be made, if so desired, with the approval of the Secretary of the Treasury.