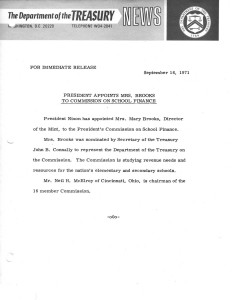 President Nixon has appointed Mrs. Mary Brooks, Director of the Mint, to the President’s commission on School Finance.

Mr. Neil H. McElroy of Cincinnati, Ohio, is chairman of the 16 member Commission.