Proposed Issue of a Twenty-Cent Coin 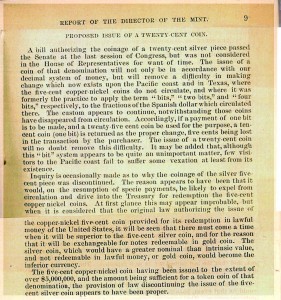 A bill authorizing the coinage of a twenty-cent silver piece passed the Senate at the last session of Congress, but was not considered in the House of Representatives for want of time. The issue of a coin of that denomination will not only be in accordance with our decimal system of money, but will remove a difficulty in making change which now exists upon the Pacific coast and in Texas, where the five-cent copper-nickel coins do not circulate, and where it was formerly the practice to apply the term “bits,” “two bits,” and “four bits,” respectively, to the fractions of the Spanish dollar which circulated there. The custom appears to continue, notwithstanding those coins have disappeared from circulation. Accordingly, if a payment of one bit is to be made, and a twenty-five cent coin be used for the purpose, a ten-cent coin (one bit) is returned as the proper change, five cents being lost in the transaction by the purchaser. The issue of a twenty-cent coin will not doubt remove this difficulty. It may be added that, although this “bit” system appears to be quite an unimportant matter, few visitors to the Pacific coast fail to suffer some vexation at least from its existence.

Inquiry is occasionally made as to why the coinage of the silver five-cent piece was discontinued. The reason appears to have been that it would, on the resumption of specie payments, be likely to expel from circulation and drive into the Treasury for redemption the five-cent copper nickel coins. At first glance this may appear improbable, but when it is considered that the original law authorizing the issue of the copper-nickel five-cent coin provided for its redemption in lawful money of the United States, it will be seen that there must come a time when it will be superior to the five-cent silver coin, and for the reason that it will be exchangeable for notes redeemable in gold coin. The silver coin, which would have a greater nominal than intrinsic value, and not redeemable in lawful money, or gold coin, would become the inferior currency.

The five-cent copper-nickel coin having been issued to the extent of over $5,000,000, and the amount being sufficient for a token coin of that denomination, the provision of law discontinuing the issue of the five-cent silver coin appears to have been proper.