Restoration of the Old San Francisco Mint Has Been Completed 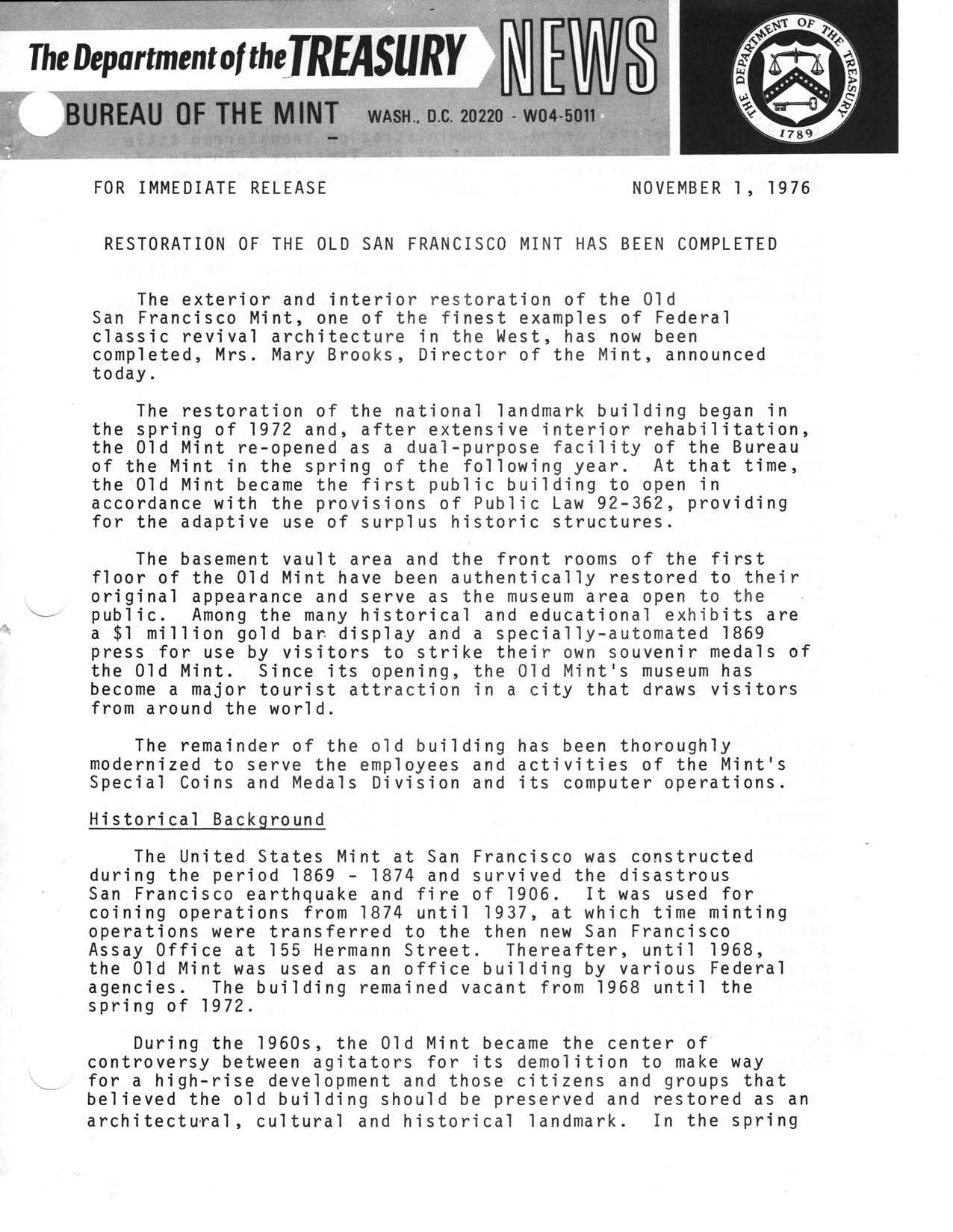 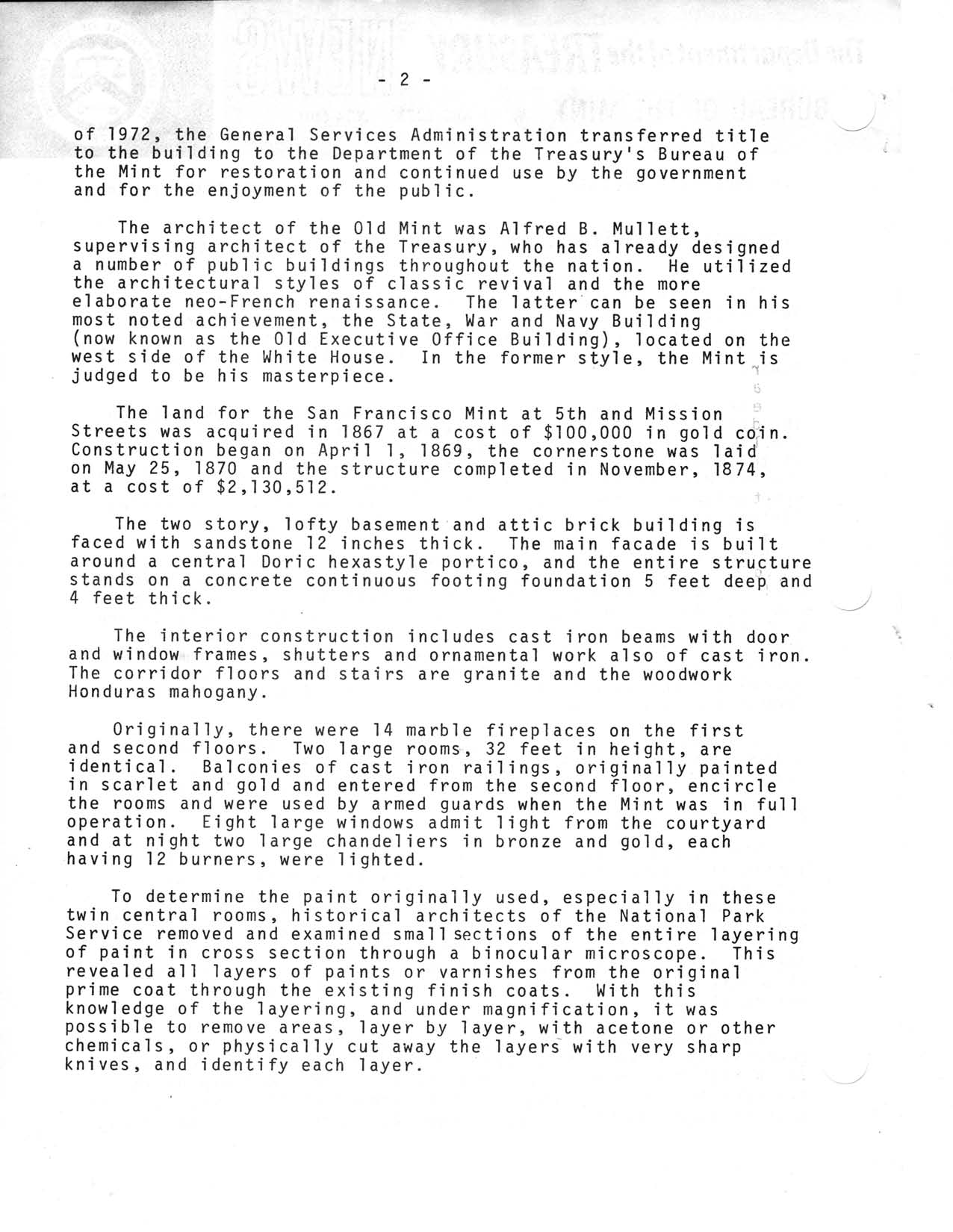 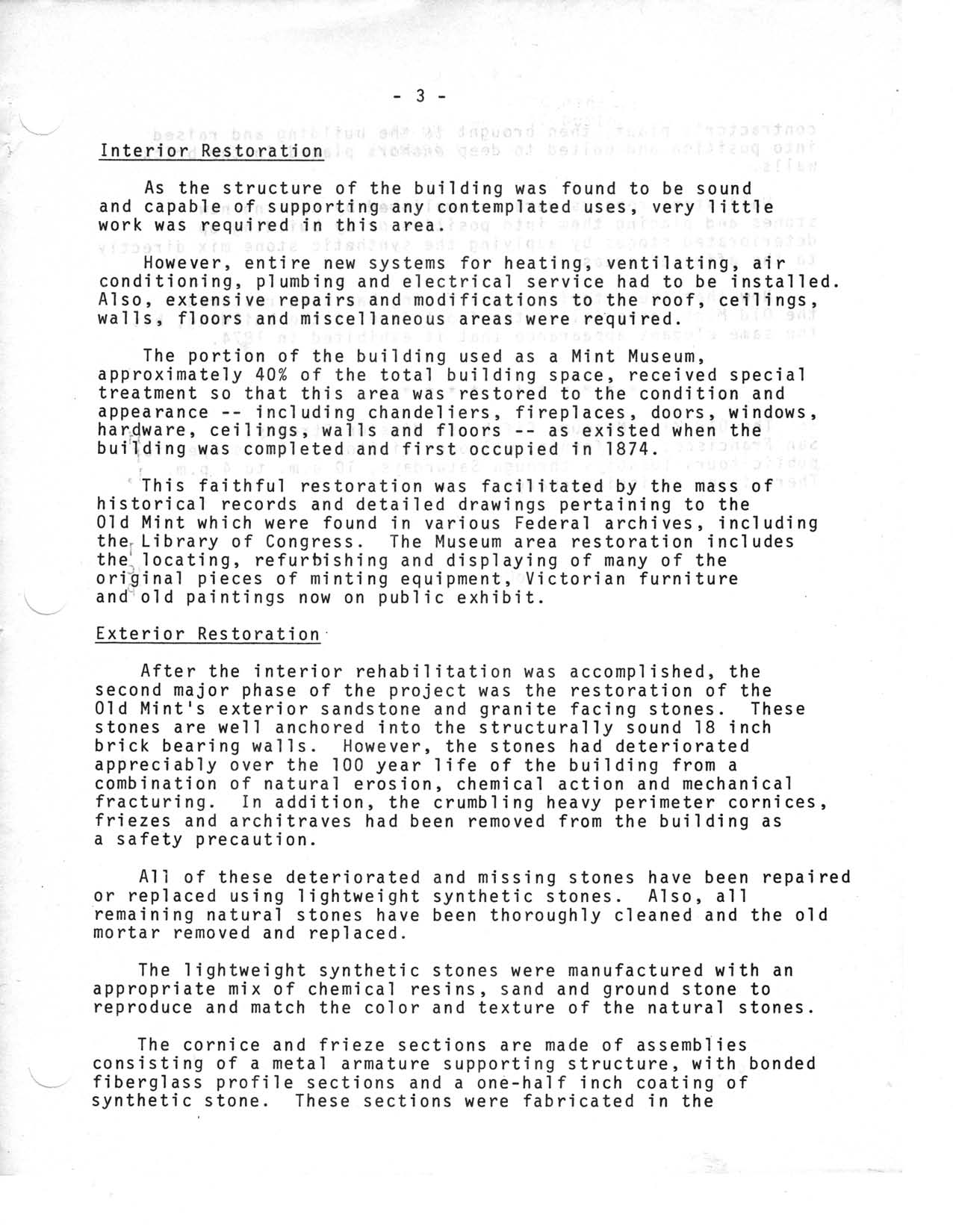 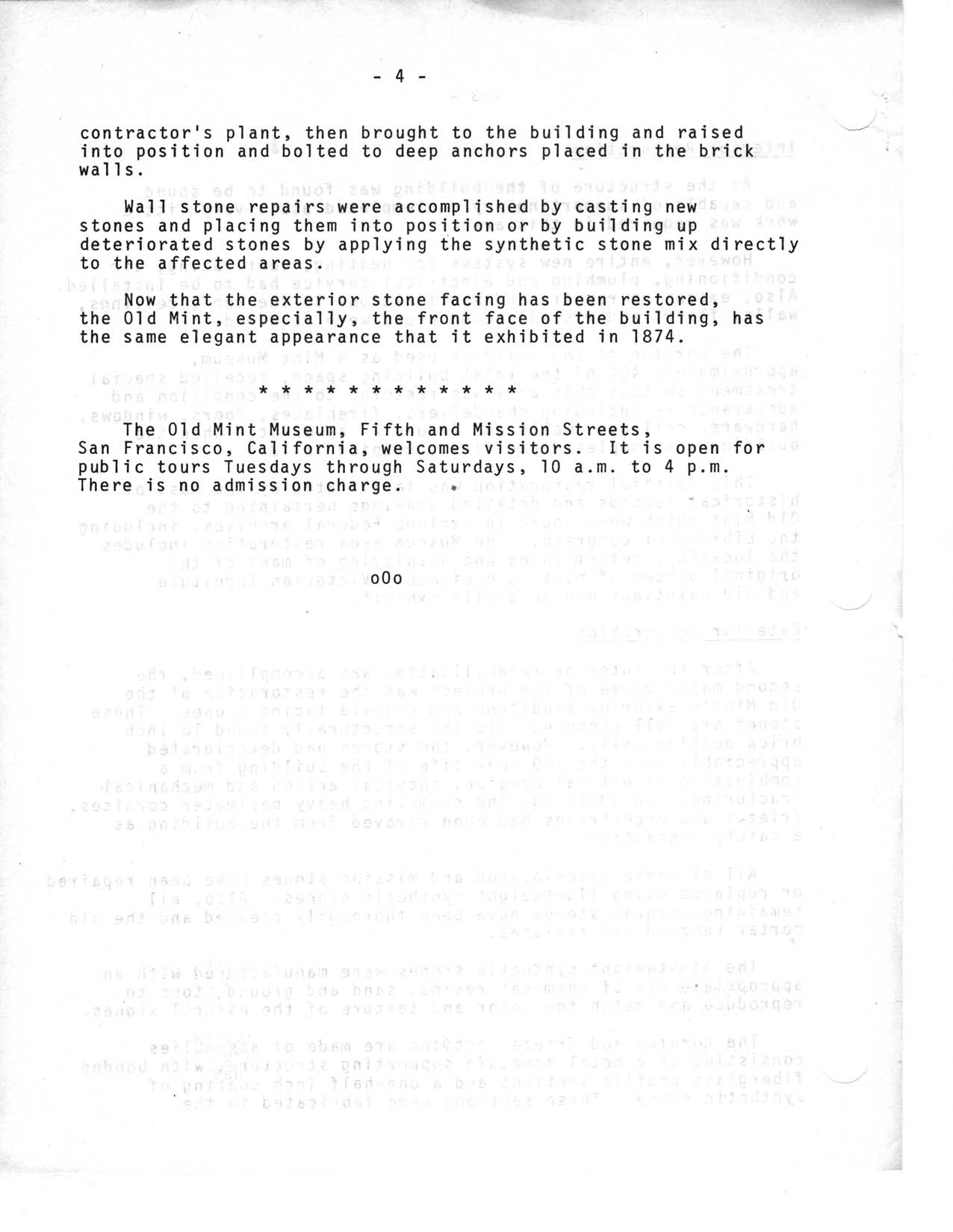 The exterior and interior restoration of the Old San Francisco Mint, one of the finest examples of Federal classic revival architecture in the West, has now been completed, Mrs. Mary Brooks, Director of the Mint, announced today.

The restoration of the national landmark building began in the spring of 1972 and, after extensive interior rehabilitation, the Old Mint re-opened as a dual-purpose facility of the Bureau of the Mint in the spring of the following year. At that time, the Old Mint became the first public building to open in accordance with the provisions of Public Law 92-362, providing for the adaptive use of surplus historic structures.

The basement vault area and the front rooms of the first floor of the Old Mint have been authentically restored to their original appearance and serve as the museum area open to the public. Among the many historical and educational exhibits are a $1 million gold bar display and a specially-automated 1869 press for use by visitors to strike their own souvenir medals of the Old Mint. Since its opening, the Old Mint’s museum has become a major tourist attraction in a city that draws visitors from around the world.

The remainder of the old building has been thoroughly modernized to serve the employees and activities of the Mint’s Special Coins and Medals Division and its computer operations.

The United States Mint at San Francisco was constructed during the period 1869-1874 and survived the disastrous San Francisco earthquake and fire of 1906. It was used for coining operations from 1874 until 1937, at which time minting operations were transferred to the then new San Francisco Assay Office at 155 Hermann Street. Thereafter, until 1968, the Old Mint was used as an office building by various Federal agencies. The building remained vacant from 1968 until the spring of 1972.

During the 1960s, the Old Mint became the center of controversy between agitators for its demolition to make way for a high-rise development and those citizens and groups that believed the old building should be preserved and restored as an architectural, cultural and historical landmark. In the spring of 1972, the General Services Administration transferred title to the building to the Department of the Treasury’s Bureau of the Mint for restoration and continued use by government and for the enjoyment of the public.

The architect of the Old Mint was Alfred B. Mullett, supervising architect of the Treasury, who has already designed a number of public buildings throughout the nation. He utilized the architectural styles of classic revival and the more elaborate neo-French renaissance. The latter can be seen in his most noted achievement, the State, War and Navy Building (now known as the Old Executive Office Building), located on the west side of the White House. In the former style, the Mint is judged to be his masterpiece.

The two story, lofty basement and attic brick building is faced with sandstone 12 inches thick. The main facade is built around a central Doric hexastyle portico, and the entire structure stands on a concrete continuous footing foundation 5 feet deep and 4 feet thick.

The interior construction includes cast iron beams with door and window frames, shutters and ornamental work also of cast iron. The corridor floors and stairs are granite and the woodwork Honduras mahogany.

Originally, there were 14 marble fireplaces on the first and second floors. Two large rooms, 32 feet in height, are identical. Balconies of cast iron railings, originally painted in scarlet and gold and entered from the second floor, encircle the rooms and were used by armed guards when the Mint was in full operation. Eight large windows admit light from the courtyard and at night two large chandeliers in bronze and gold, each having 12 burners, were lighted.

To determine the paint originally used, especially in these twin central rooms, historical architects of the National Park Service removed and examined small sections of the entire layering of paint in cross section through a binocular microscope. This revealed all layers of paints or varnishes from the original prime coat through the existing finish coats. With this knowledge of the layering, and under magnification, it was possible to remove areas, layer by layer, with acetone or other chemicals, or physically cut away the layers with very sharp knives, and identify each layer.

As the structure of the building was found to be sound and capable of supporting any contemplated uses, very little work was required in this area.

However, entire new systems for heating, ventilating, air conditioning, plumbing and electrical service had to be installed. Also, extensive repairs and modifications to the roof, ceilings, walls, floors and miscellaneous areas were required.

The portion of the building used as a Mint Museum, approximately 40% of the total building space, received special treatment so that this area was restored to the condition and appearance—including chandeliers, fireplaces, doors, windows, hardware, ceilings, walls and floors—as existed when the building was completed and first occupied in 1874.

This faithful restoration was facilitated by the mass of historical records and detailed drawings pertaining to the Old Mint which were found in various Federal archives, including the Library of Congress. The Museum area restoration includes the locating, refurbishing and displaying of many of the original pieces of minting equipment, Victorian furniture and old paintings now on public exhibit.

After the interior rehabilitation was accomplished, the second major phase of the project was restoration of the Old Mint’s exterior sandstone and granite facing stones. These stones are well anchored into the structurally sound 18 inch brick bearing walls. However, the stones had deteriorated appreciably over the 100 year life of the building from a combination of natural erosion, chemical action and mechanical fracturing. In addition, the crumbling heavy perimeter cornices, friezes and architraves had been removed from the building as a safety precaution.

All of these deteriorated and missing stones have been repaired or replaced using lightweight synthetic stones. Also, all remaining natural stones have been thoroughly cleaned and the old mortar removed and replaced.

The lightweight synthetic stones were manufactured with an appropriate mix of chemical resins, sand and ground stone to reproduce and match the color and texture of the natural stones.

The cornice and frieze sections are made of assemblies consisting of a metal armature supporting structure, with bonded fiberglass profile sections and a one-half inch coating of synthetic stone. These sections were fabricated in the contractor’s plant, then brought to the building and raised into position and bolted to deep anchors placed in the brick walls.

Wall stone repairs were accomplished by casting new stones and placing them into position or by building up deteriorated stones by applying the synthetic stone mix directly to the affected areas.

Now that the exterior stone facing has been restored, the Old Mint, especially, the front face of the building, has the same elegant appearance that it exhibited in 1874.

The Old Mint Museum, Fifth and Mission Streets, San Francisco, welcomes visitors. It is open for public tours Tuesdays through Saturdays, 10 a.m. to 4 p.m. There is no admission charge.