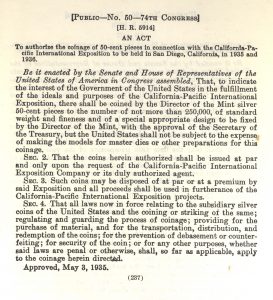 An Act To authorize the coinage of 50-cent pieces in connection with the California-Pacific International Exposition to be held in San Diego, California, in 1935 and 1936.

Be it enacted by the Senate and House of Representatives of the United States of America in Congress assembled, That, to indicate the interest of the Government of the United States in the fulfillment of the ideals and purposes of the California-Pacific International Exposition, there shall be coined by the Director of the Mint silver 50-cent pieces to the number of not more that 250,000, of standard weight and fineness and of a special appropriate design to be fixed by the Director of the Mint, with the approval of the Secretary of the Treasury, but the United States shall not be subject to the expense of making the models for master dies or other preparations for this coinage.

SEC. 2. That the coins herein authorized shall be issued at par and only upon the request of the California-Pacific International Exposition Company or its duly authorized agent.

SEC. 3. Such coins may be disposed of at par or at a premium by said Exposition and all proceeds shall be used in furtherance of the California-Pacific International Exposition projects.