The Great Earthquake and Fire 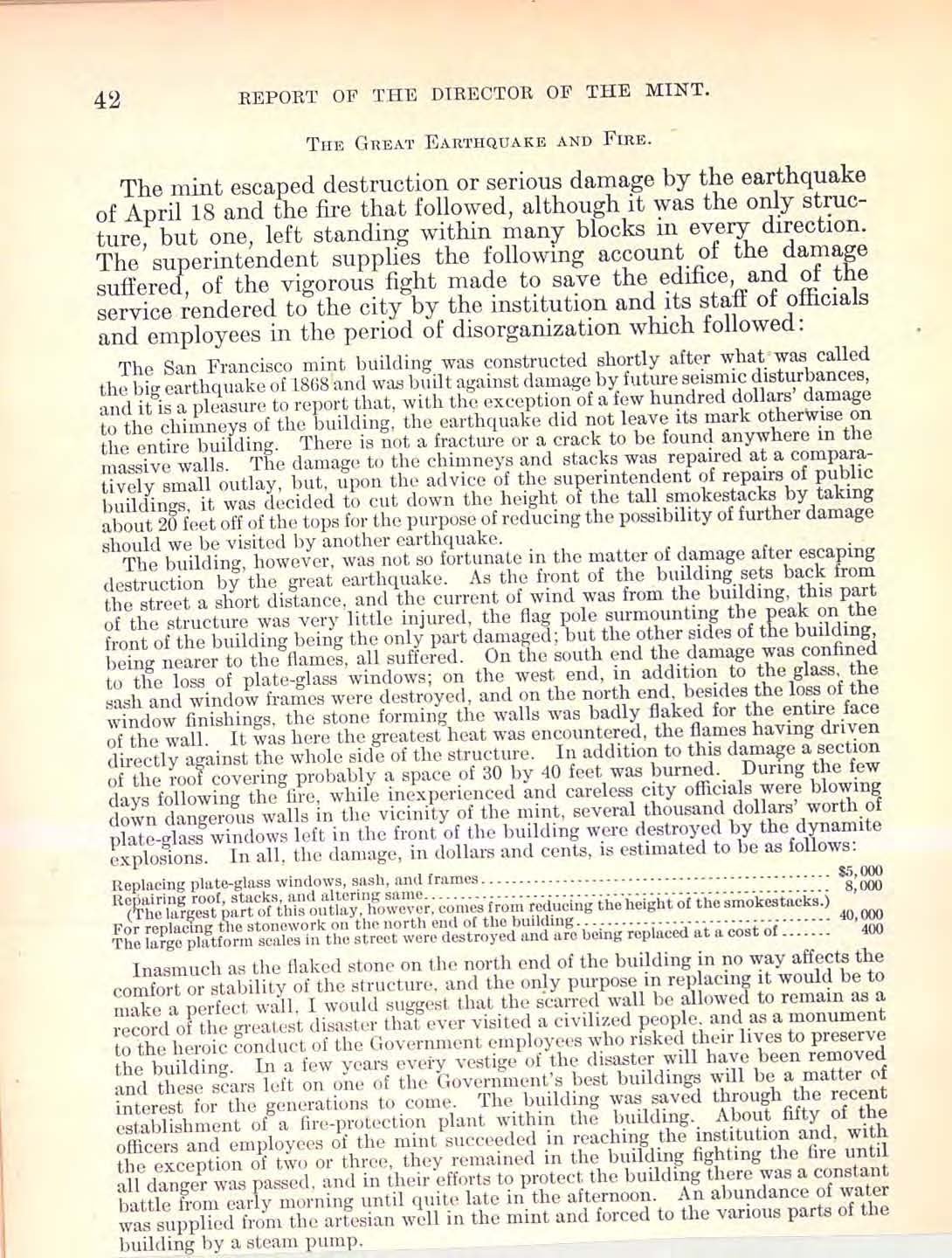 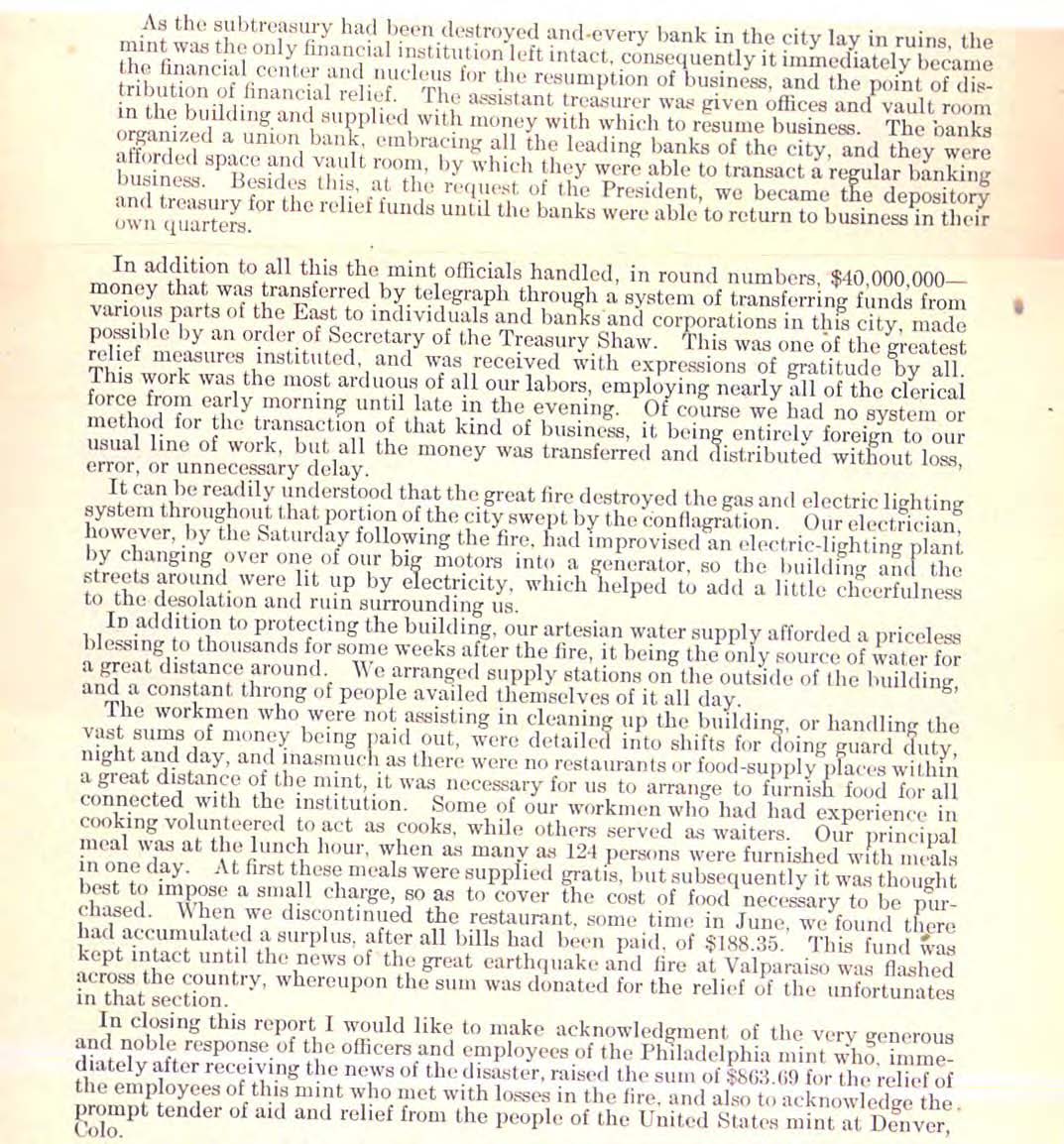 The mint escaped destruction or serious damage by the earthquake of April 18 and the fire that followed, although it was the only structure, but one, left standing within many blocks in every direction. The superintendent supplies the following account of the damage suffered, of the vigorous fight made to save the edifice, and of the service rendered to the city by the institution and its staff of officials and employees in the period of disorganization which followed:

The San Francisco mint building was constructed shortly after what was called the big earthquake of 1868 and was built against damage by future seismic disturbances, and it is a pleasure to report that, with the exception of a few hundred dollars’ damage to the chimneys of the building, the earthquake did not leave its mark otherwise on the entire building. There is not a fracture or a crack to be found anywhere in the massive walls. The damage to the chimneys and stacks was repaired at a comparatively small outlay, but, upon the advice of the superintendent of repairs of public buildings, it was decided to cut down the height of the tall smokestacks by taking about 20 feet off of the tops for the purpose of reducing the possibility of further damage should we be visited by another earthquake.

The building, however, was not so fortunate in the matter of damage after escaping destruction by the great earthquake. As the front of the building sets back from the street a short distance, and the current of wind was from the building, this part of the structure was very little injured, the flag pole surmounting the peak on the front of the building being the only part damaged; but the other sides of the building, being nearer to the flames, all suffered. On the south end the damage was confined to the loss of plate-glass windows; on the west end, in addition to the glass, the sash and window frames were destroyed, and on the north end, besides the loss of the window finishings, the stone forming the walls was badly flaked for the entire face of the wall. It was here the greatest heat was encountered, the flames having driven directly against the whole side of the structure. In addition to this damage a section of the roof covering probably a space of 30 by 40 feet was burned. During the few days following the fire, while inexperienced and careless city officials were blowing down dangerous walls in the vicinity of the mint, several thousand dollars’ worth of plate-glass windows left in the front of the building were destroyed by the dynamite explosions. In all, the damage, in dollars and cents, is estimated as follows:

Replacing plate-glass windows, sash, and frames ………$5,000
Repairing roof, stacks, and altering same ………8,000
(The largest part of this outlay, however, comes from reducing the height of the smokestacks.)
For replacing the stonework on the north end of the building………40,000
The large platform scales in the street were destroyed and are being replaced at a cost of..……400

Inasmuch as the flaked stone on the north end of the building in no way affects the comfort or stability of the structure, and the only purpose in replacing it would be to make a perfect wall, I would suggest that the scarred wall be allowed to remain as a record of the greatest disaster that ever visited a civilized people, and as a monument to the heroic conduct of the Government employees who risked their lives to preserve the building. In a few years every vestige of the disaster will have been removed and these scars left on one of the Government’s best buildings will be a matter of interest for generations to come. The building was saved through the recent establishment of a fire-protection plant within the building. About fifty of the officers and employees of the mint succeeded in reaching the institution and, with the exception of two or three, they remained in the building fighting the fire until all danger was passed, and in their efforts to protect the building there was a constant battle from early morning until quite late in the afternoon. An abundance of water was supplied from the artesian well in the mint and forced to the various parts of the building by a steam pump.

As the subtreasury had been destroyed and every bank in the city lay in ruins, the mint was the only financial institution left intact, consequently it immediately became the financial center and nucleus for the resumption of business, and the point of distribution of financial relief. The assistant treasurer was given offices and vault room in the building and supplied with money with which to resume business. The banks organized a union bank, embracing all the leading banks of the city, and they were afforded space and vault room, by which they were able to transact a regular banking business. Besides this, at the request of the President, we became the depository and treasury for the relief funds until the banks were able to return to business in their own quarters.

In addition to all this the mint officials handled, in round numbers, $40,000,000—money that was transferred by telegraph through a system of transferring funds from various parts of the East to individuals and banks and corporations in this city, made possible by an order of Secretary of the Treasury Shaw. This was one of the greatest relief measures instituted, and was received with expressions of gratitude by all. This work was the most arduous of all our labors, employing nearly all of the clerical force from early morning until late in the evening. Of course we had no system or method for the transaction of that kind of business, it being entirely foreign to our usual line of work, but all the money was transferred and distributed without loss, error, or unnecessary delay.

It can be readily understood that the great fire destroyed the gas and electric lighting system throughout that portion of the city swept by the conflagration. Our electrician, however, by the Saturday following the fire, had improvised an electric-lighting plant by changing over one of our big motors into a generator, so the building and the streets around were lit up by electricity, which helped to add a little cheerfulness to the desolation and ruin surrounding us.

In addition to protecting the building, our artesian water supply afforded a priceless blessing to thousands for some weeks after the fire, it being the only source of water for a great distance around. We arranged supply stations on the outside of the building, and a constant throng of people availed themselves of it all day.

The workmen who were not assisting in cleaning up the building, or handling the vast sums of money being paid out, were detailed into shifts for doing guard duty, night and day, and inasmuch as there were no restaurants or food-supply places within a great distance of the mint, it was necessary for us to arrange to furnish food for all connected with the institution. Some of our workers who had had experience in cooking volunteered to act as cooks, while others served as waiters. Our principal meal was at the lunch hour, when as many as 124 persons were furnished with meals in one day. At first these meals were supplied gratis, but subsequently it was thought best to impose a small charge, so as to cover the cost of food necessary to be purchased. When we discontinued the restaurant, some time in June, we found there had accumulated a surplus, after all bills had been paid, of $188.35. This fund was kept intact until the news of the great earthquake and fire at Valparaiso was flashed across the country, whereupon the sum was donated for the relief of the unfortunates in that section.

In closing this report I would like to make acknowledgement of the very generous and noble response of the officers and employees of the Philadelphia mint who, immediately after receiving the news of the disaster, raised the sum of $863.69 for the relief of the employees of this mint who met with losses in the fire, and also acknowledge the prompt tender of aid and relief from the people of the United States mint at Denver, Colo.