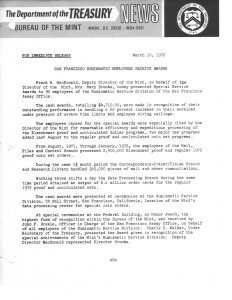 The cash awards, totalling $4,710.00, were made in recognition of their outstanding performance in handling a 62 percent increase in their workload under pressure of severe time limits and employee hiring ceilings.

During the same 5½ month period the Correspondence-Tracer/Claims Branch and Research Library handled 345,000 pieces of mail and other communications.

Working three shifts a day the Data Processing Branch during the same time period attained an output of 6.4 million order cards for the regular 1972 proof and uncirculated sets.

At special ceremonies at the Federal Building, an Honor Award, the highest form of recognition within the Bureau of the Mint, was received by John F. Brekle, Officer in Charge of the San Francisco Assay Office, on behalf of all employees of the Numismatic Service Division. Charls E. Walker, Under Secretary of the Treasury, presented the Award given in recognition of the special achievements of the Mint’s Numismatic Service Division. Deputy Director MacDonald represented Director Brooks.