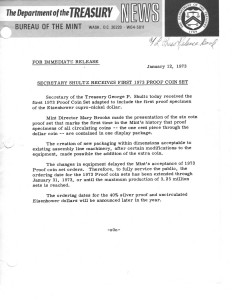 Secretary of the Treasury George P. Shultz today received the first 1973 Proof Coin Set adapted to include the first proof specimen of the Eisenhower cupro-nickel dollar.

Mint Director Mary Brooks made the presentation of the six coin proof set that marks the first time in the Mint’s history that proof specimens of all circulating coins—the one cent piece through the dollar coin—are contained in one display package.

The creation of new packaging within dimensions acceptable to existing assembly line machinery, after certain modifications to the equipment, made possible the addition of the extra coin.

The changes in equipment delayed the Mint’s acceptance of 1973 Proof coin set orders. Therefore, to fully service the public, the ordering date for the 1973 Proof coin sets has been extended through January 31, 1973, or until the maximum production of 3.25 million sets is reached.

The ordering dates for the 40% silver proof and uncirculated Eisenhower dollars will be announced later in the year.