In Answer to Inquiries 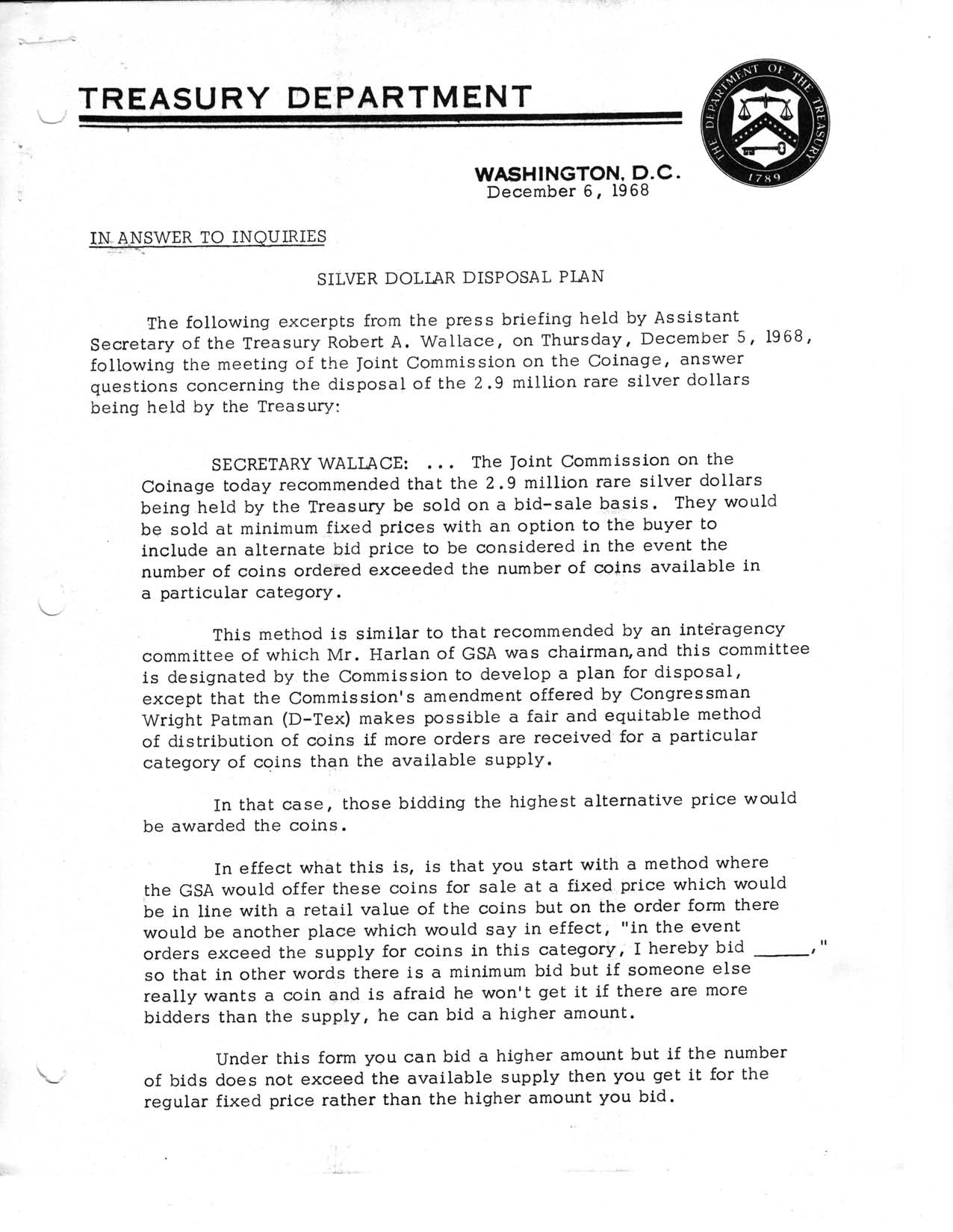 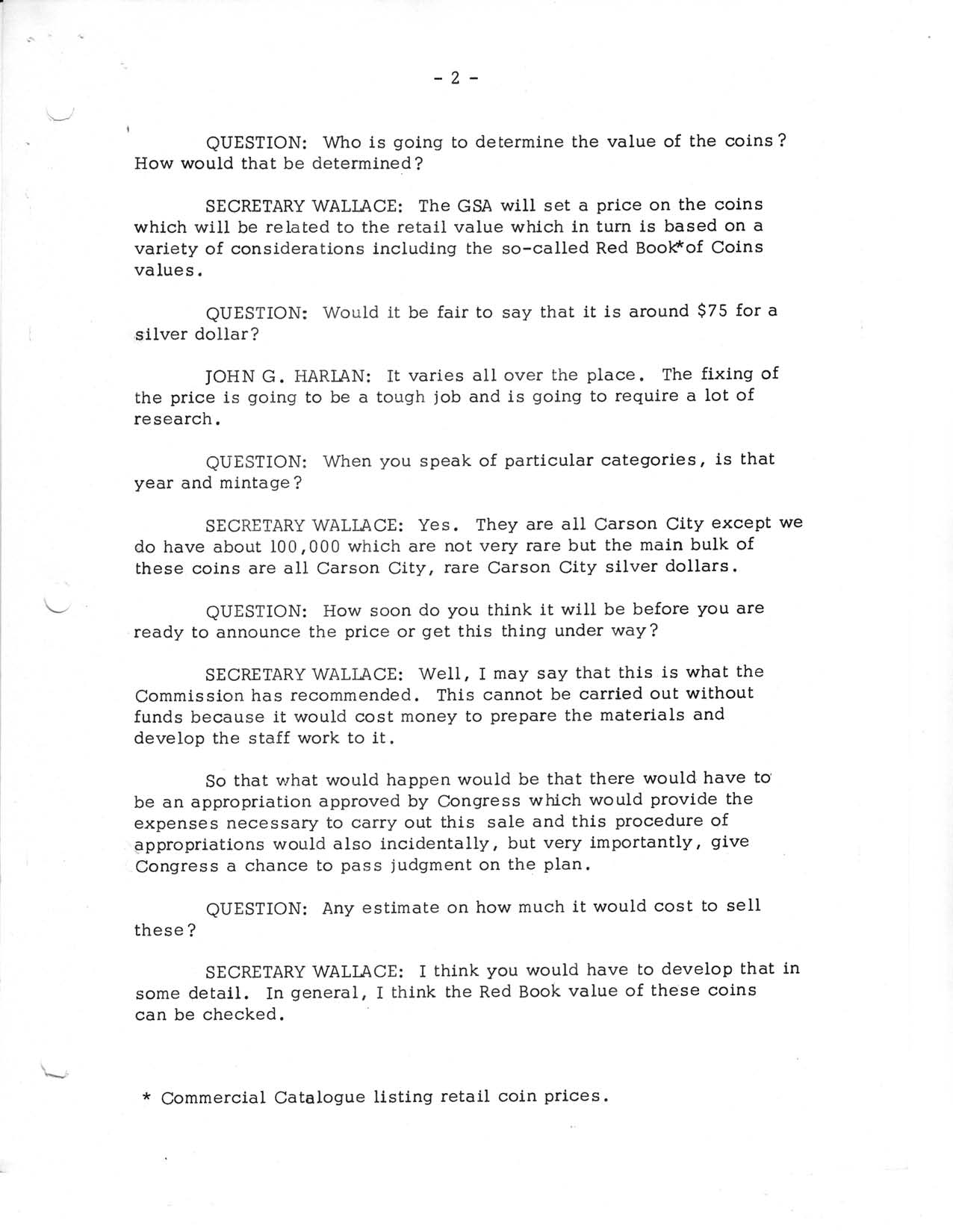 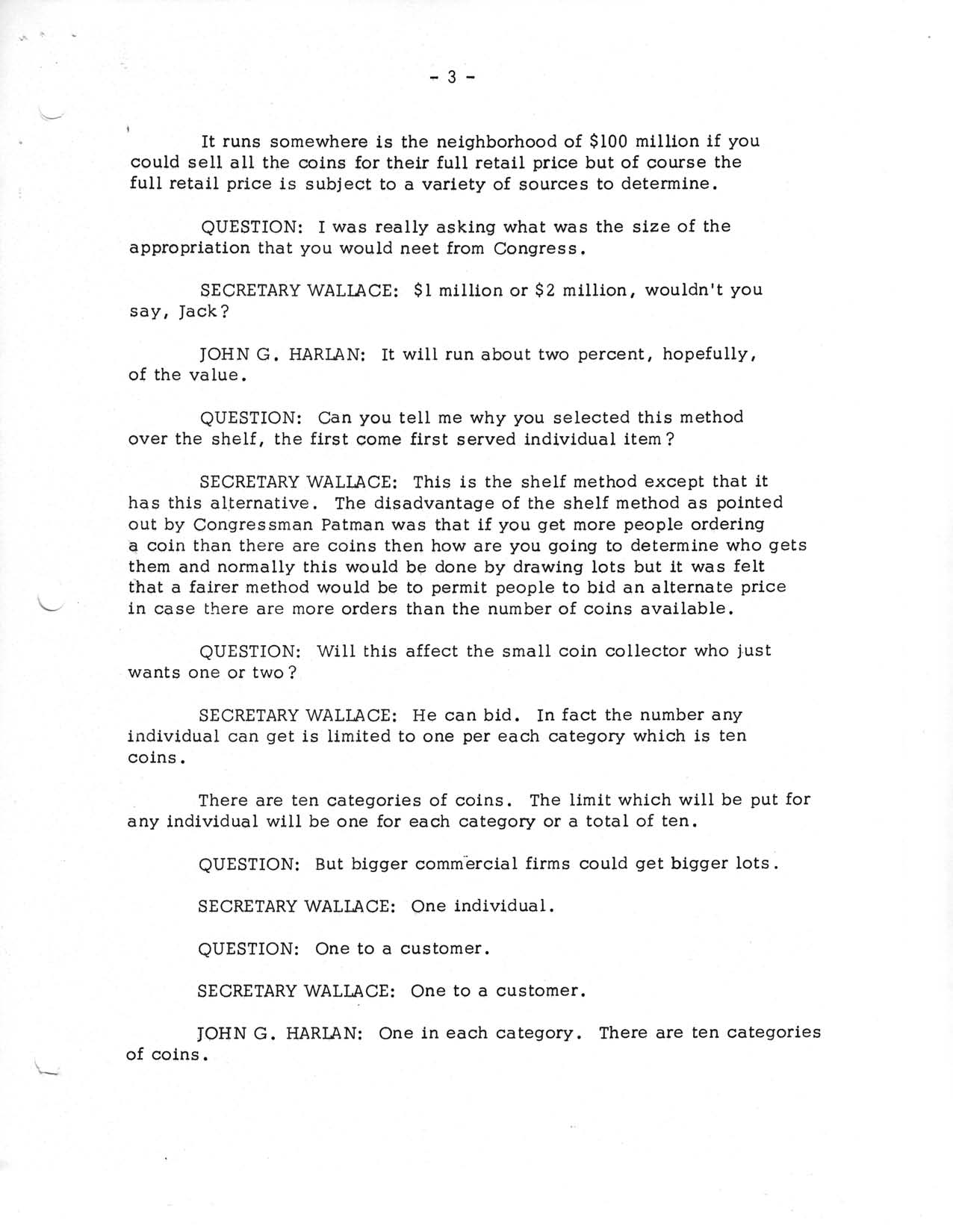 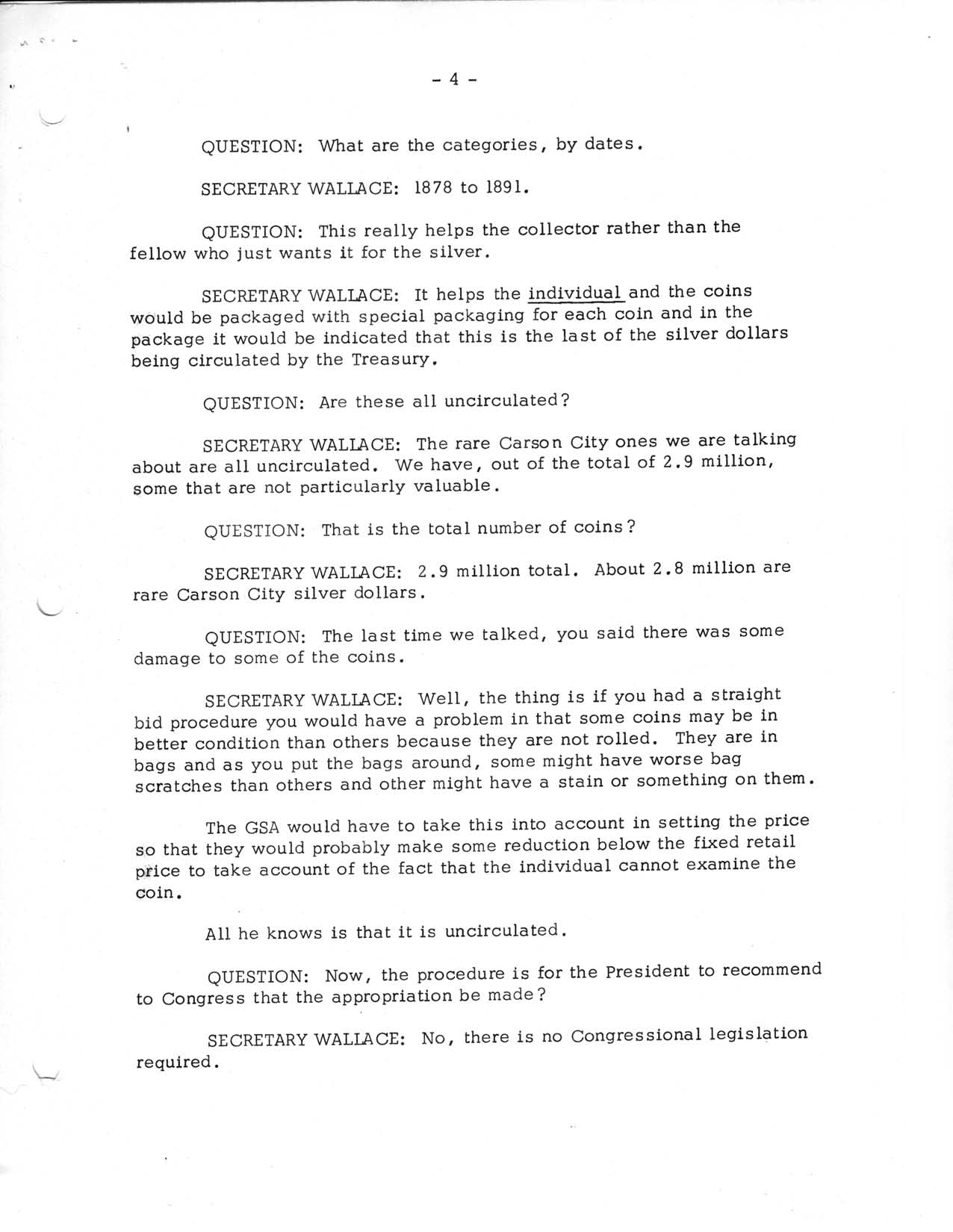 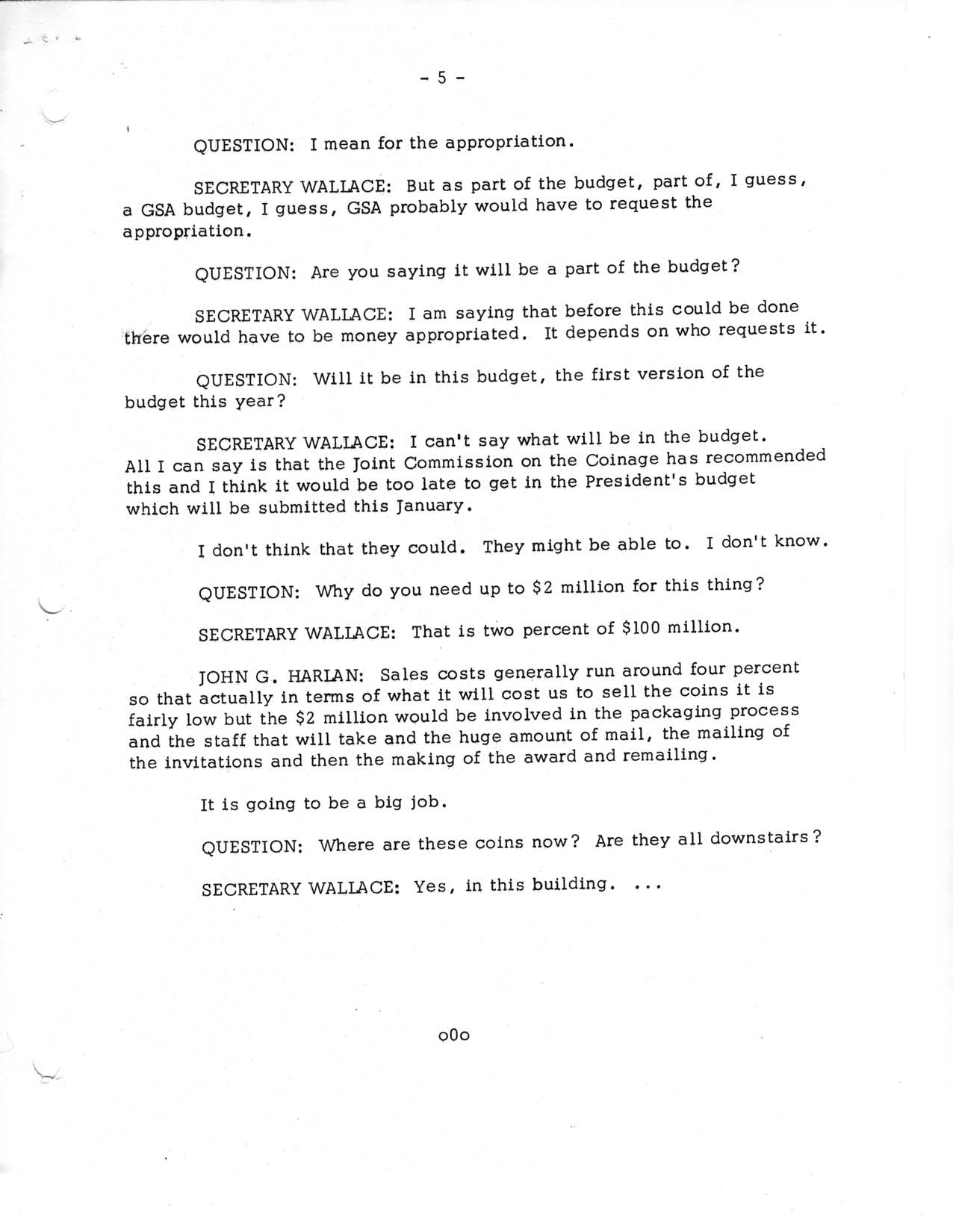 The following excerpts from the press briefing held by Assistant Secretary of the Treasury Robert A. Wallace, on Thursday, December 5, 1968, following the meeting of the Joint Commission on the Coinage, answer questions concerning the disposal of the 2.9 million rare silver dollars being held by the Treasury:

SECRETARY WALLACE: … The Joint Commission on the Coinage today recommended that the 2.9 million rare silver dollars being held by the Treasury be sold on a bid-sale basis. They would be sold at minimum fixed prices with an option to the buyer to include an alternate bid price to be considered in the event the number of coins ordered exceeded the number of coins available in a particular category.

This method is similar to that recommended by an interagency committee of which Mr. Harlan of GSA was chairman, and this committee is designated by the Commission to develop a plan for disposal, except that the Commission’s amendment offered by Congressman Wright Patman (D-Tex) makes possible a fair and equitable method of distribution of coins if more orders are received for a particular category of coins than the available supply.

In that case, those bidding the highest alternative price would be awarded the coins.

In effect what this is, is that you start with a method where the GSA would offer these coins for sale at a fixed price which would be in line with a retail value of the coins but on the order form there would be another place which would say in effect, “in the event orders exceed the supply for coins in this category, I hereby bid _______,” so that in other words there is a minimum bid but if someone else really wants a coin and is afraid he won’t get it if there are more bidders than the supply, he can bid a higher amount.

Under this form you can bid a higher amount but if the number of bids does not exceed the available supply then you get it for the regular fixed price rather than the higher amount you bid.

QUESTION: Who is going to determine the value of the coins? How would that be determined?

SECRETARY WALLACE: The GSA will set a price on the coins which will be related to the retail value which in turn is based on a variety of considerations including the so-called Red Book* of Coins values.

QUESTION: Would it be fair to say that it is around $75 for a silver dollar?

JOHN G. HARLAN: It varies all over the place. The fixing of the price is going to be a tough job and is going to require a lot of research.

QUESTION: When you speak of particular categories, is that year and mintage?

QUESTION: How soon do you think it will be before you are ready to announce the price or get this thing under way?

SECRETARY WALLACE: Well, I may say that this is what the Commission has recommended. This cannot be carried out without funds because it would cost money to prepare the materials and develop the staff work to it.

So that what would happen would be that there would have to be an appropriation approved by Congress which would provide the expenses necessary to carry out this sale and this procedure of appropriations would also incidentally, but very importantly, give Congress a chance to pass judgment on the plan.

QUESTION: Any estimate on how much it would cost to sell these?

SECRETARY WALLACE: I think you would have to develop that in some detail. In general, I think the Red Book value of these coins can be checked.

QUESTION: I was really asking what was the size of the appropriation that you would neet from Congress.

JOHN G. HARLAN: It will run about two percent, hopefully, of the value.

QUESTION: Can you tell me why you selected this method over the shelf, the first come first served individual item?

SECRETARY WALLACE: This is the shelf method except that it has this alternative. The disadvantage of the shelf method as pointed out by Congressman Patman was that if you get more people ordering a coin than there are coins then how are you going to determine who gets them and normally this would be done by drawing lots but it was felt that a fairer method would be to permit people to bid an alternate price in case there are more orders than the number of coins available.

QUESTION: Will this affect the small coin collector who just wants one or two?

SECRETARY WALLACE: He can bid. In fact the number any individual can get is limited to one per each category which is ten coins.

There are ten categories of coins. The limit which will be put for any individual will be one for each category or a total of ten.

QUESTION: But bigger commercial firms could get bigger lots.

QUESTION: One to a customer.

SECRETARY WALLACE: One to a customer.

JOHN G. WALLACE: One in each category. There are ten categories of coins.

QUESTION: What are the categories, by dates.

QUESTION: This really helps the collector rather than the fellow who just wants it for the silver.

SECRETARY WALLACE: It helps the individual and the coins would be packaged with special packaging for each coin and in the package it would be indicated that this is the last of the silver dollars being circulated by the Treasury.

QUESTION: Are these all uncirculated?

SECRETARY WALLACE: The rare Carson City ones we are talking about are all uncirculated. We have, out of the total of 2.9 million, some that are not particularly valuable.

QUESTION: That is the total number of coins?

QUESTION: The last time we talked, you said there was some damage to some of the coins.

SECRETARY WALLACE: Well, the thing is if you had a straight bid procedure you would have a problem in that some coins may be in better condition than others because they are not rolled. They are in bags and as you put the bags around, some might have worse bag scratches than others and other might have a stain or something on them.

The GSA would have to take this into account in setting the price so that they would probably make some reduction below the fixed retail price to take account of the fact that the individual cannot examine the coin.

All he knows is that it is uncirculated.

QUESTION: Now, the procedure is for the President to recommend to Congress that the appropriation be made?

SECRETARY WALLACE: No, there is no Congressional legislation required.

QUESTION: I mean for the appropriation.

SECRETARY WALLACE: But as part of the budget, part of, I guess, a GSA budget, I guess, GSA probably would have to request the appropriation.

QUESTION: Are you saying it will be a part of the budget?

SECRETARY WALLACE: I am saying that before this could be done there would have to be money appropriated. It depends on who requests it.

QUESTION: Will it be in this budget, the first version of the budget this year?

SECRETARY WALLACE: I can’t say what will be in the budget. All I can say is that the Joint Commission on the Coinage has recommended this and I think it would be too late to get in the President’s budget which will be submitted this January.

I don’t think that they could. They might be able to. I don’t know.

QUESTION: Why do you need up to $2 million for this thing?

SECRETARY WALLACE: That is two percent of $100 million.

JOHN G. HARLAN: Sales costs generally run around four percent so that actually in terms of what it will cost us to sell the coins it is fairly low but the $2 million would be involved in the packaging process and the staff that will take and the huge amount of mail, the mailing of the invitations and then the making of the award and remailing.

It is going to be a big job.

QUESTION: Where are these coins now? Are they all downstairs?

SECRETARY WALLACE: Yes, in this building.