Transfer of Stamped Mint-Bars to the Treasury 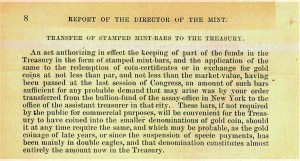 An act authorizing in effect the keeping of part of the funds in the Treasury in the form of stamped mint-bars, and the application of the same to the redemption of coin-certificates or in exchange for gold coins at not less than par, and not less than the market-value, having been passed at the last session of Congress, an amount of such bars sufficient for any probable demand that may arise was by your order transferred from the bullion-fund of the assay-office in New York to the office of the assistant treasurer in that city. These bars, if not required by the public for commercial purposes, will be convenient for the Treasury to have coined into the smaller denominations of gold coin, should it at any time require the same, and which may be probable, as the gold coinage of late years, or since the suspension of specie payments, has been mainly in double eagles, and that denomination constitutes almost entirely the amount now in the Treasury.