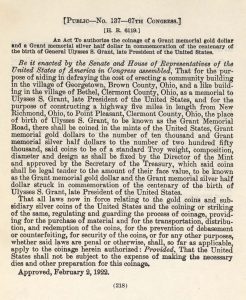 An Act To authorize the coinage of a Grant memorial gold dollar and a Grant memorial silver half dollar in commemoration of the centenary of the birth of General Ulysses S. Grant, late President of the United States.

That all laws now in force relating to the gold coins and subsidiary silver coins of the United States and the coining or striking of the same, regulating and guarding the process of coinage, providing for the purchase of material and for the transportation, distribution, and redemption of the coins, for the prevention of debasement or counterfeiting, for security of the coins, or for any other purposes, whether said laws are penal or otherwise, shall, so far as applicable, apply to the coinage herein authorized: Provided, That the United States shall not be subject to the expense of making the necessary dies and other preparation for this coinage.