At the Philadelphia Mint
Independence Mall, Philadelphia, Pennsylvania
on June 8, 1971, at 11:30 A.M. 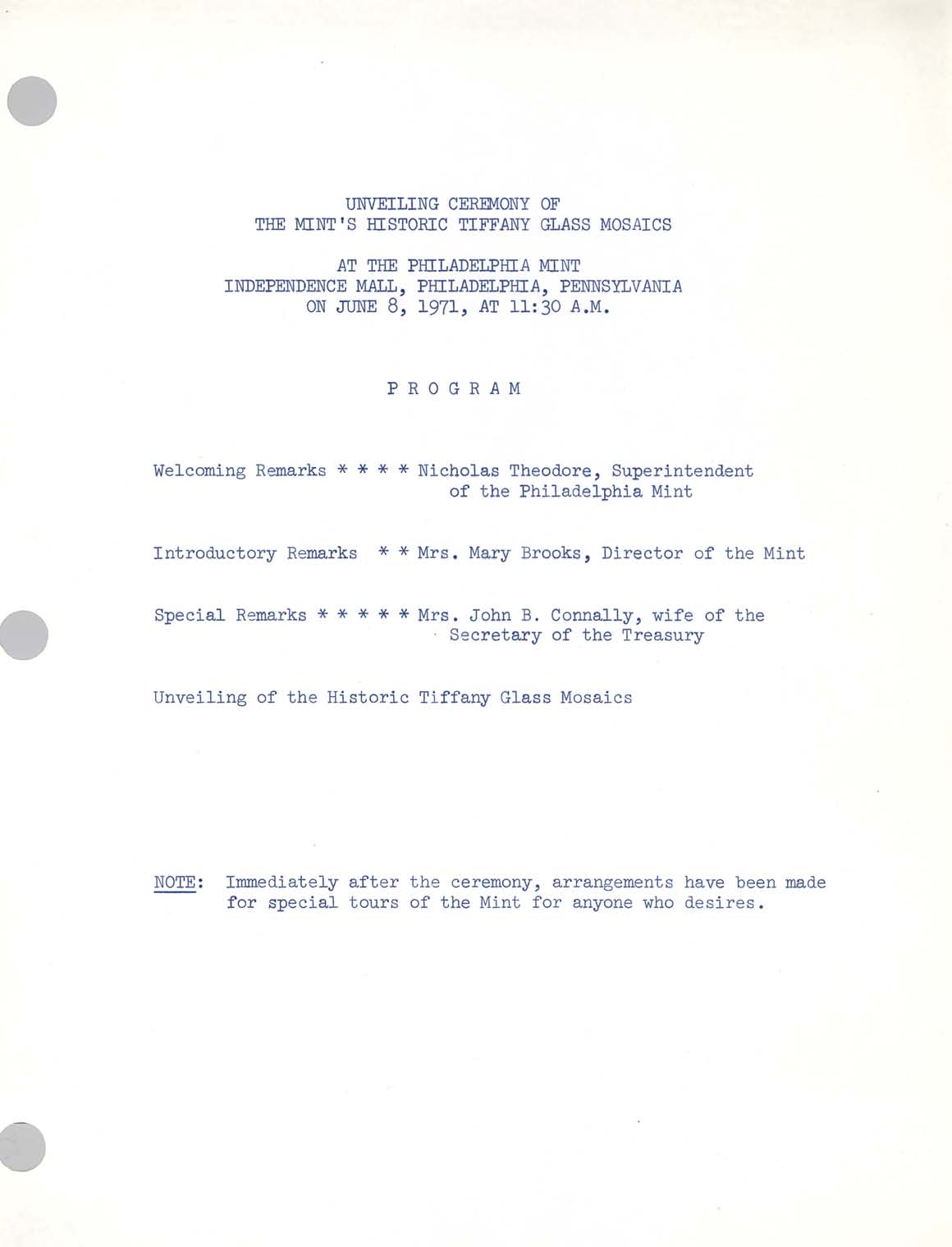 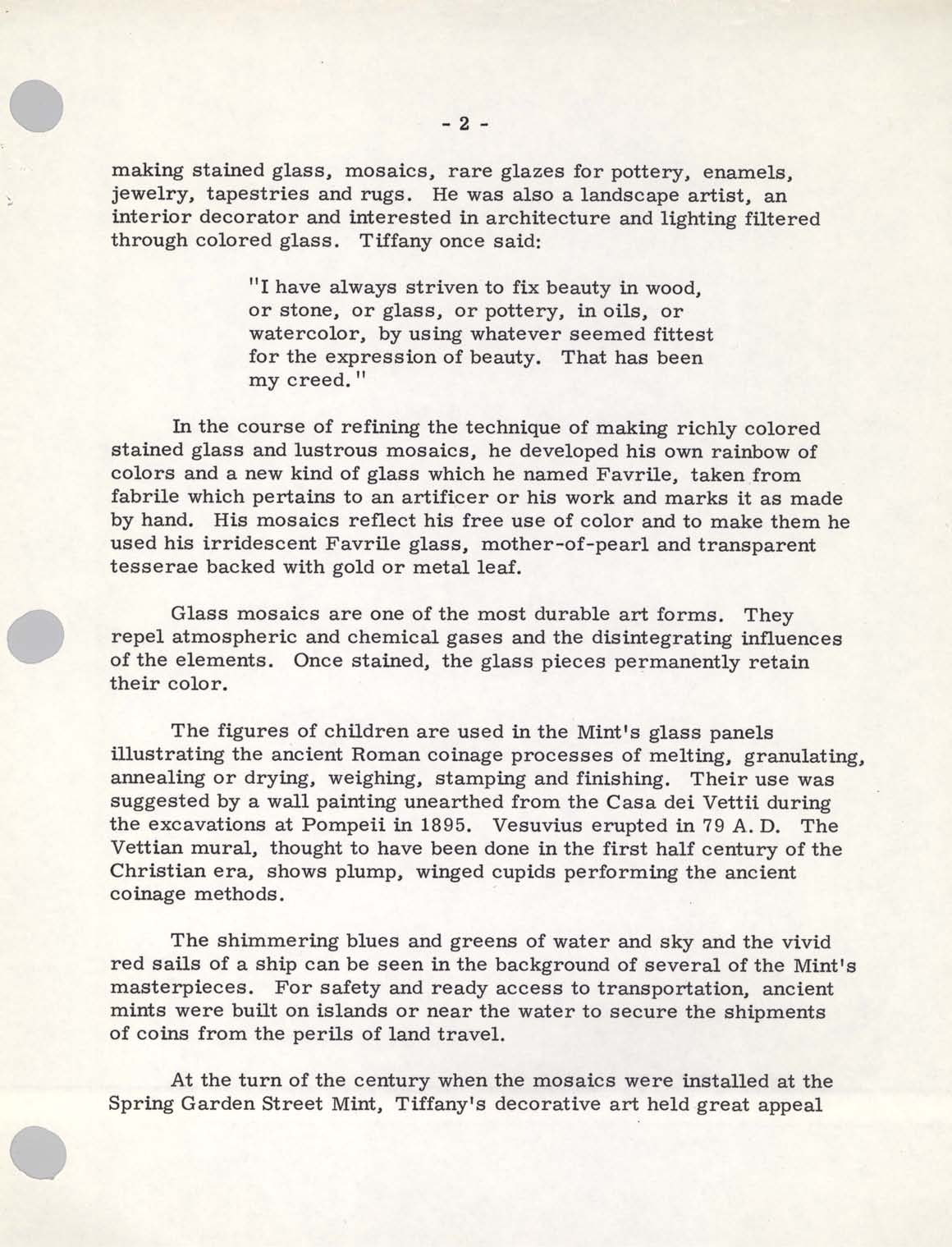 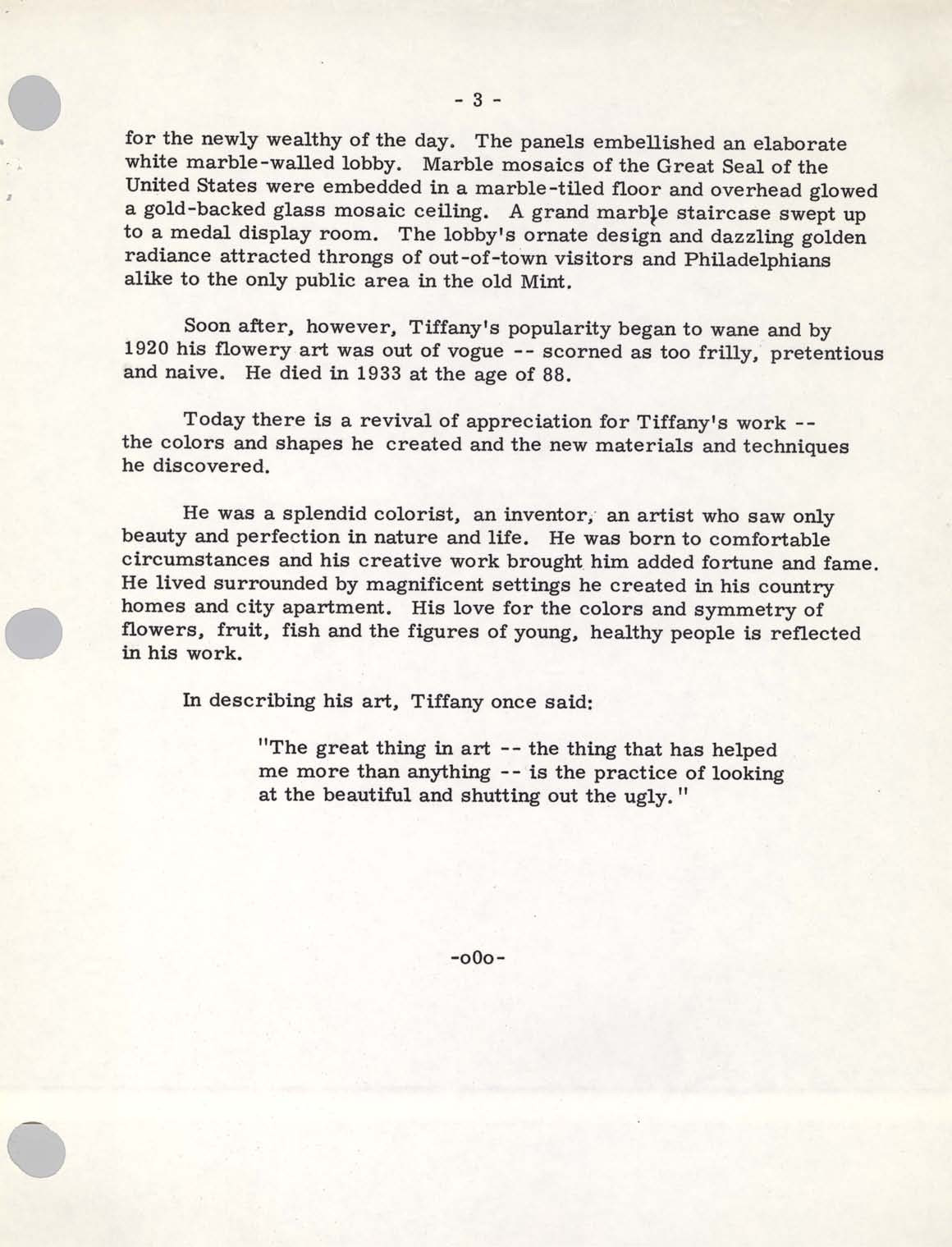 Special Remarks* * * * * Mrs. John B. Connally, wife of the Secretary of the Treasury

NOTE: Immediately after the ceremony, arrangements have been made for special tours of the Mint for anyone who desires.

Seven Favrile glass mosaics, executed under the personal direction of Louis C. Tiffany of the famous Tiffany Studios of New York City, have been removed from the old Philadelphia Mint on Spring Garden Street and re-mounted in the new U.S. Mint on Independence Mall.

Mrs. Mary Brooks, Director of the Mint, had the mosaics moved from the old to the new Mint to preserve them as national treasures. The old Mint became inefficient and obsolete for coinage production and will be disposed of by the General Services Administration in accordance with regular procedures.

The mosaics, made from designs by William B. Van Ingen, are unique to the coinage operation and were commissioned at a cost of $40,000 for the third Mint facility in Philadelphia which opened in 1901. The two oblong pieces measure 49-½ inches in height and 166-¼ inches in width. The five circular works are 59-½ inches in diameter. Appraisers have placed a today’s fair value of $420,000 on the seven panels.

Tiffany’s world celebrity derives from his brilliantly hued stained glass windows and mosaic designs found in many churches and buildings here and abroad and from his floriated glass-shaded lamps and ornamental objects on display in museums and held in private collections. The Mint’s pictorial mosaics are among the finest examples of the superb craftsmanship and lasting beauty of Tiffany’s decorative art.

He began his artistic career as a painter. An exceptional sense of color he wished to impart to varied art forms and a desire to raise the quality of minor arts to fine art — a term once reserved for oil paintings and sculpture — led him to turn his multi-faceted talent to making stained glass, mosaics, rare glazes for pottery, enamels, jewelry, tapestries and rugs. He was also a landscape artist, an interior decorator and interested in architecture and lighting filtered through colored glass. Tiffany once said:

“I have always striven to fix beauty in wood, or stone, or glass, or pottery, in oils, or watercolor, by using whatever seemed fittest for the expression of beauty. That has been my creed.”

In the course of refining the technique of making richly colored stained glass and lustrous mosaics, he developed his own rainbow of colors and a new kind of glass which he named Favrile, taken from fabrile which pertains to an artificer or his work and marks it as made by hand. His mosaics reflect his free use of color and to make them he used his iridescent Favrile glass, mother-of-pearl and transparent tesserae backed with gold or metal leaf.

Glass mosaics are one of the most durable art forms. They repel atmospheric and chemical gases and the disintegrating influences of the elements. Once stained, the glass pieces permanently retain their color.

The figures of children are used in the Mint’s glass panels illustrating the ancient Roman coinage processes of melting, granulating, annealing or drying, weighing, stamping and finishing. Their use was suggested by a wall painting unearthed from the Casa dei Vettii during the excavations at Pompeii in 1895. Vesuvius erupted in 79 A.D. The Vettian mural, thought to have been done in the first half century of the Christian era, shows plump, winged cupids performing the ancient coinage methods.

The shimmering blues and greens of water and sky and the vivid red sails of a ship can be seen in the background of several of the Mint’s masterpieces. For safety and ready access to transportation, ancient mints were built on islands or near the water to secure the shipments of coins from the perils of land travel.

At the turn of the century when the mosaics were installed at the Spring Garden Street Mint, Tiffany’s decorative art held great appeal for the newly wealthy of the day. The panels embellished an elaborate white marble-walled lobby. Marble mosaics of the Great Seal of the United States were embedded in a marble-tiled floor and overhead glowed a gold-backed glass mosaic ceiling. A grand marble staircase swept up to a medal display room. The lobby’s ornate design and dazzling golden radiance attracted throngs of out-of-town visitors and Philadelphians alike to the only public area in the old Mint.

Soon after, however, Tiffany’s popularity began to wane and by 1920 his flowery art was out of vogue — scorned as too frilly, pretentious and naive. He died in 1933 at the age of 88.

Today there is a revival of appreciation for Tiffany’s work — the colors and shapes he created and the new materials and techniques he discovered.

He was a splendid colorist, an inventor, an artist who saw only beauty and perfection in nature and life. He was born to comfortable circumstances and his creative work brought him added fortune and fame. He lived surrounded by magnificent settings he created in his country homes and city apartment. His love for the colors and symmetry of flowers, fruit, fish and the figures of young, healthy people is reflected in his work.

In describing his art, Tiffany once said:

“The great thing in art — the thing that has helped me more than anything — is the practice of looking at the beautiful and shutting out the ugly.”