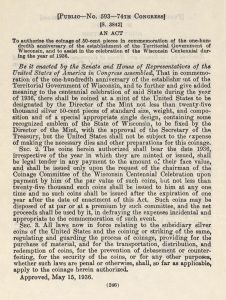 An Act To authorize the coinage of 50-cent pieces in commemoration of the one-hundredth anniversary of the establishment of the Territorial Government of Wisconsin, and to assist in the celebration of the Wisconsin Centennial during the year of 1936.

Be it enacted by the Senate and House of Representatives of the United States of America in Congress assembled, That in commemoration of the one-hundredth anniversary of the establishment of the Territorial Government of Wisconsin, and to further and give added meaning to the centennial celebration of said State during the year of 1936, there shall be coined at a mint of the United States to be designated by the Director of the Mint not less than twenty-five thousand silver 50-cent pieces of standard size, weight, and composition and of a special appropriate single design, containing some recognized emblem of the State of Wisconsin, to be fixed by the Director of the Mint, with the approval of the Secretary of the Treasury, but the United States shall not be subject to the expense of making the necessary dies and other preparations for this coinage.

SEC. 2. The coins herein authorized shall bear the date 1936, irrespective of the year in which they are minted or issued, shall be legal tender in any payment to the amount of their face value, and shall be issued only upon the request of the chairman of the Coinage Committee of the Wisconsin Centennial Celebration upon payment by him of the par value of such coins, but not less than twenty-five thousand such coins shall be issued to him at any one time and no such coins shall be issued after the expiration of one year after the date of enactment of this Act. Such coins may be disposed of at par or at a premium by such committee, and the net proceeds shall be used by it, in defraying the expenses incidental and appropriate to the commemoration of such event.