By Office of Corporate Communications
January 25, 2023 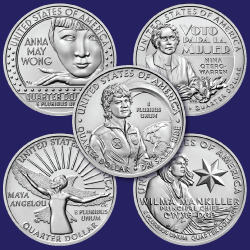 The American Women Quarters™ (AWQ) Program is the first circulating coin program dedicated solely to celebrating American women. Representing diverse fields, accomplishments, ethnicities, and races, these pioneering women are brought together by one commonality: their contributions were groundbreaking and left a lasting impact on our society. Collectively, the honorees have shaped our nation’s history throughout the centuries.

In 2022, the first year of the program, each honoree highlights the breadth and depth of accomplishments being honored in this coin program. Maya Angelou was a celebrated author and activist. Dr. Sally Ride was a physicist, astronaut, educator, and the first American woman in space. Wilma Mankiller was the first woman elected chief of the Cherokee Nation. Nina Otero-Warren was a leader in New Mexico’s suffrage movement. Anna May Wong was the first Chinese American film star in Hollywood. 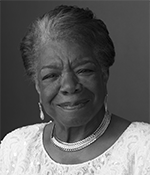 Maya Angelou was a writer, poet, performer, social activist, and teacher who rose to international prominence as an author after the publication of her groundbreaking autobiography “I Know Why the Caged Bird Sings.” 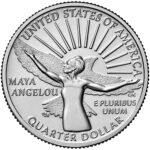 The reverse design depicts Maya Angelou with her arms uplifted. Behind her are a bird in flight and a rising sun. It was designed by Artistic Infusion Program (AIP) Designer Emily Damstra and sculpted by U.S. Mint Medallic Artist Craig Campbell.

“Ultimately, I decided that showing her in an uplifting stance, gesturing expressively, would best convey the passionate way she lived. The bird in flight and the rising sun—imagery that she incorporated in her own writing—are also symbolic of the way she lived,” said Damstra. 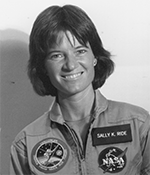 Dr. Sally Ride was a physicist, pioneer in space exploration, and leader in science education. The first American woman to soar into space, Ride captured the country’s imagination as a symbol of the ability of women to shatter barriers. Her historic flight represented just one aspect of a remarkable and multi-faceted life. 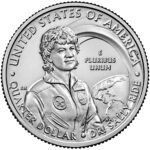 The reverse design depicts Dr. Sally Ride next to a window on the space shuttle, inspired by her quote, “But when I wasn’t working, I was usually at a window looking down at Earth.” It was designed by AIP Designer Elana Hagler and sculpted by Medallic Artist Phebe Hemphill. The inscription “E PLURIBUS UNUM” is intentionally positioned over the outline of the U.S., indicating that Ride was the first American woman in space.

“Dr. Ride had an opportunity to view our home, this planet, from a vantage point seen by so very few. All of human existence becomes contained in this marble, this coin, glowing in the vastness of space,” said Hagler. “An astronaut’s profession is so much about technical know-how, but it is also about courage, daring, and such rare moments of transcendent awe.” 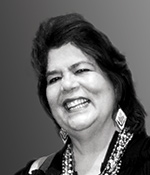 Wilma Mankiller was the first woman elected chief of the Cherokee Nation. Mankiller’s administration revitalized the Cherokee Nation through extensive community development and made the tribe a national role model. After leaving office, she remained a strong voice worldwide for social justice, native people, and women. 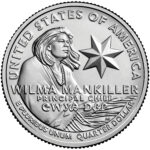 The reverse design depicts Wilma Mankiller with a resolute gaze to the future. The wind is at her back, and she is wrapped in a traditional shawl. To her left is the seven-pointed star of the Cherokee Nation. It was designed by AIP Designer Benjamin Sowards and sculpted by Medallic Artist Phebe Hemphill.

“We pay close attention to every piece of symbolism to ensure the tribe is properly represented,” said Design Manager Megan Sullivan.

“The Wilma Mankiller sculpt was a nice challenge because the viewer’s point of view is below her, and she is looking off into the distance,” said Hemphill. “The process of sculpting is like figuring out a puzzle with severe depth limitations.” 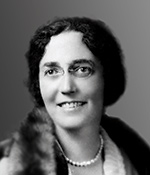 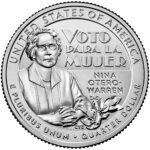 The reverse design features an image of Nina Otero-Warren on the left, flanked by three individual Yucca flowers – New Mexico’s state flower. It was designed by AIP Designer Chris Costello and sculpted by Medallic Artist Craig A. Campbell.

“This quarter dollar design is composed of a portrait of Nina Otero-Warren, a powerful inscription, and a cluster of Yucca blossoms, the state flower of New Mexico. It recognizes Nina Otero-Warren’s influence as a New Mexico politician, educator, and suffragist in support of the ratification of the 19th Amendment,” said Costello, who drew on his background as a graphic designer, illustrator, and type designer to create the quarter design. “The Art Deco typography reflects America’s progressive mood during the early 20th century.

“The inscription, ‘VOTO PARA LA MUJER’ [‘Votes for Women’], is a nod to Otero-Warren’s belief that the use of Spanish was critical in the New Mexico suffrage movement,” said Costello. 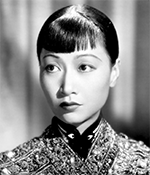 Anna May Wong left a lasting legacy for Asian American women in the entertainment industry. Her career spanned motion pictures, television, and theater. She appeared in more than 60 movies, including silent films and one of the first films made in Technicolor. Throughout her career, she championed the need for increased representation and more multi-dimensional roles for Asian American actors. 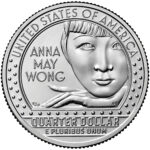 The reverse design features a close-up image of Anna May Wong with her head resting on her hand, surrounded by the bright lights of a marquee sign. It was designed by AIP Designer Emily Damstra and sculpted by Medallic Artist John McGraw.

“Many prominent actors from the ’20s and ’30s saw their names framed by lightbulbs on movie theater marquees, so I thought it made sense to feature Anna May Wong in this way,” said Damstra about her coin design. “Along with the hard work, determination, and skill Anna May Wong brought to the profession of acting, I think it was her face and expressive gestures that really captivated movie audiences, so I included these elements next to her name.”

McGraw commented, “Her forward-facing portrait is reminiscent of a theatrical mask and added to the challenge when sculpting a portrait in such low relief.”

The Mint’s AIP designers and medallic artists worked tirelessly to capture the unique characters and enduring legacies of these five extraordinary women. “It was a great honor to create this sculpture to memorialize an amazing woman, her incredible life, and her work moving humankind towards equality,” said Medallic Artist Craig Campbell of his work on the Nina Otero-Warren Quarter.

All of the 2022 honorees created positive change for new generations of women. The program continues in 2023 with five more inspirational women. Watch for these quarters in your change or buy AWQ products in our online catalog.