By Office of Corporate Communications
June 15, 2016

Near the confluence of two rivers, two bedrocks in government, the United States Mint and the National Park Service, celebrated the June 8 release of the Harpers Ferry quarter—the 33rd coin in the America the Beautiful Quarters® Program. The event was held in Harpers Ferry National Historical Park, W.Va., in Lower Town, between Hamilton Street and the Potomac River. While the riverside setting was tranquil, the event was full of excitement, as was evident by the 18-mph gusting winds.

Rebecca Harriett, Superintendent, Harpers Ferry National Historical Park, kicked off the event by welcoming the 1,100 attendees and introducing Basketball Olympic gold medalist Vicky Bullett. A native of West Virginia and a household name for many in attendance, Bullet served as the emcee for the ceremony.

The 400 children in attendance were an equally important part of the event. The colors were presented by members of the Jefferson High School Junior Air Force Junior ROTC program. Next, Members of the Boys & Girls Club of the Eastern Panhandle led the audience in a recitation of the Pledge of Allegiance. Then, students from the Greenbrier East High School Marching Band performed the National Anthem. The ceremony was underway.

Just after Ms. Bullet introduced Keith McIntosh, the field representative speaking on behalf of Senator Joe Manchin III, and he took the stage, a train came roaring across the tracks. The crowd waved as it barreled alongside the ceremony, foreshadowing the excitement yet to come.

West Virginia’s “wild and wonderful” side showed its power about halfway into the ceremony. The rain came out of nowhere and literally stopped the show. The storm sent everyone running for cover under three modest-sized tents for about 10 minutes.

The drenched students from Greenbrier East High School Marching Band performed a short, programmed interlude, which gently welcomed everyone back to the ceremony. Bob Vogel, Regional Director, National Park Service, took the stage and spoke to the NPS centennial and the importance that parks, such as Harpers Ferry, play in society. He reminded everyone that 2016 is the year to “Find Your Park.”

Having discovered the importance of Harpers Ferry National Historical Park when he was a boy, West Virginia native William G. Norton, Director of Legislative and Intergovernmental Affairs, spoke on behalf of the U.S. Mint. Waving his rain-drenched speech from the podium he spoke about what it means to be a West Virginian and reminded attendees of the power and influence of the American people:

This new coin serves as a reminder that at a river-crossing established long before our country’s struggle for independence, in a West Virginia town that played an integral role in our nation’s Civil War, came together a diverse number of people and events that influenced the course of our common history.

It was evident that the rain did not wash away the crowd’s excitement or anticipation for the ceremonial pouring of the Harpers Ferry quarter. As the original withstood the test of time, a replica of John Brown’s fort withstood the storm. The ceremonial party pulled a dowel rod out of the edifice and hundreds of newly minted Harpers Ferry quarters were poured into a rifle and musket ammunition box. As the quarters came to a standstill, the 400 children rushed the stage in hopes of grabbing one; they were stopped and reminded that every child would receive a quarter one by one.

Following the ceremony, the public had the opportunity to exchange their cash for rolls of newly-minted Harpers Ferry National Historical Park quarters at the coin exchange hosted by Jefferson Security Bank. The bank exchanged $29,000 in (P) quarters.

Harpers Ferry NPS officials set up a wonderful reception in a nearby tent with sandwiches and cookies following the event. Thomas Hipschen, who engraved the reverse design of the Harpers Ferry quarter, met with the kids and taught them the basics of coin design. Peter the Mint Eagle and Bill the Mint Buffalo mascots also made an appearance.

The previous evening, this same tent hosted 85 participants at the Harpers Ferry Coin Forum. Bill Norton and members of the NPS fielded questions about coins, current and future legislation, as well indulging in conversations about the “next” quarter series potentially to begin during the next decade.

On a more predictable nature, the next coin in the America the Beautiful Quarters Program, the Theodore Roosevelt National Park quarter, will release in late August. 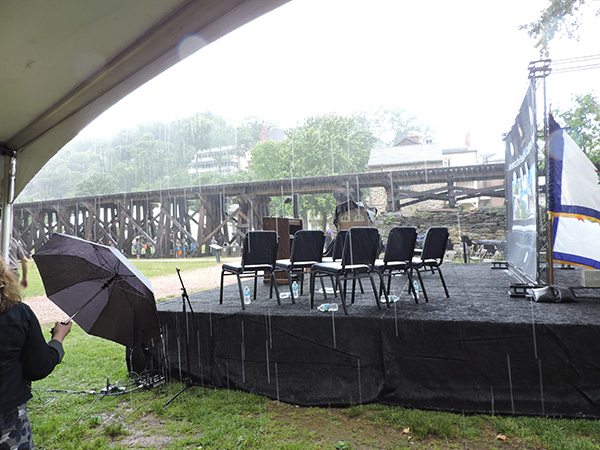 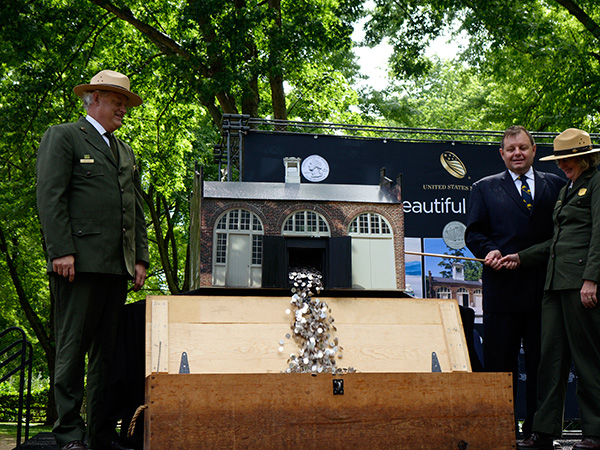