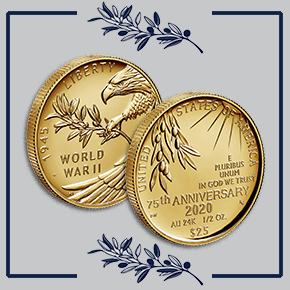 WASHINGTON – Today, the United States Mint (Mint) is officially announcing the designs for the 2020 End of World War II 75th Anniversary Coin and Medal Program. The designs will be featured on a 24-karat gold coin and a silver medal. Images of the coin and medal are available here.

The common obverse (heads) design depicts an eagle in flight grasping an olive branch, symbolizing peace, in its right talon. The design is inspired by the 1945 version of the Great Seal of the United States, which portrays the eagle facing right toward the olive branch. Inscriptions are “LIBERTY,” “1945,” and “WORLD WAR II.” Mint Artistic Infusion Program (AIP) artist Ronald Sanders created this design, which was sculpted by Mint Medallic Artist Phebe Hemphill.

The common reverse (tails) design echoes the sun element on the obverse of the 1945 World War II Victory Medal. The sun depicted on that medal has, 75 years later, risen to noon day brilliance. It shines on the olive branches. Inscriptions on the gold coin are “UNITED STATES OF AMERICA,” “E PLURIBUS UNUM,” “IN GOD WE TRUST,” “75th ANNIVERSARY,” “2020,” “AU 24K,” “1/2 OZ.” and “$25.” The inscription on the silver medal is “75th ANNIVERSARY.” AIP artist Donna Weaver created this design, which Mint Medallic Artist Renata Gordon sculpted.

On-sale dates for all of the 2020 End of World War II 75th Anniversary coins and medal are published on the Mint’s Product Schedule here. To sign up for Remind Me alerts and to purchase the products, visit: