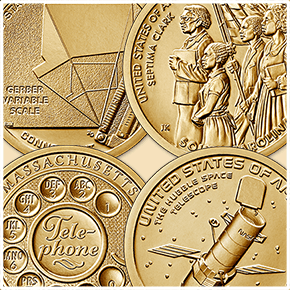 WASHINGTON – The United States Mint (Mint) today officially announced the designs for the 2020 American Innovation™ $1 Coin Program. The new designs will appear on the reverses (tails) of $1 coins honoring innovations and/or innovators from Connecticut, Massachusetts, Maryland, and South Carolina.

American Innovation – Connecticut
Designer: Richard Masters
Sculptor-Engraver: Renata Gordon
The Connecticut $1 Coin recognizes the Gerber Variable Scale. The design depicts the scale being used to increase a geometric shape by 200 percent, a shape that resembles the state of Connecticut. Inscriptions are “UNITED STATES OF AMERICA,” “GERBER VARIABLE SCALE,” and “CONNECTICUT.”

Images are available at https://www.usmint.gov/news/image-library/american-innovation-dollar.

American Innovation $1 Coins feature a common obverse (heads) design depicting a dramatic representation of the Statue of Liberty and the required inscriptions “$1” and “IN GOD WE TRUST.”

The American Innovation $1 Coin Program is a multi-year series featuring distinctive reverse designs that pay homage to America’s ingenuity and celebrate the pioneering efforts of individuals or groups from all 50 states, the District of Columbia, and the U.S. territories.