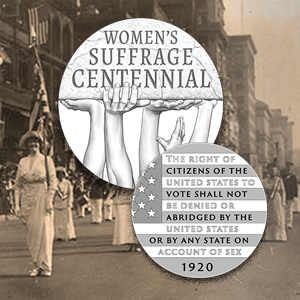 WASHINGTON – The United States Mint (Mint) officially announces the design for the 2020 Women’s Suffrage Centennial Silver Medal. Developed in conjunction with the 2020 Women’s Suffrage Centennial Silver Dollar, this limited edition 99.9% silver medal will accompany the silver dollar celebrating the 100th anniversary of the ratification of the 19th Amendment. Line art of the design is available here.

The obverse of the medal, designed by Artistic Infusion Program (AIP) artist Beth Zaiken and sculpted by United States Mint Medallic Artist Renata Gordon, features a child’s reaching hand, amid adult women’s hands and arms holding up a heavy weight—a kind of “foundation” of stone. Women’s suffrage was a struggle that continued across generations, with countless hands turned to the task. “WOMEN’S SUFFRAGE CENTENNIAL” is inscribed.

The reverse of the medal, designed by AIP artist Patricia Lucas-Morris and sculpted by United States Mint Medallic Artist Renata Gordon, honors the Women’s Suffrage Movement by juxtaposing the text of the 19th Amendment, ratified in 1920, with the flag of the United States. “1920” is inscribed.

“The 2020 centennial of the Nineteenth Amendment is a rare moment to celebrate the milestone in American history that made it possible for women to finally have a voice in government. It is such a pleasure to see this effort remembered through the imagery of this medal,” said Senator Marsha Blackburn, sponsor of the Senate version of the legislation. “Every woman in Congress today has the women and men of the suffrage movement to thank for our right to represent our constituents. Ninety-nine years after women gained the right to vote, I became the first woman from Tennessee to serve in the United States Senate. It is my hope that this medal will keep this history alive.”

“The Women’s Suffrage Centennial Commission extends its gratitude to Congress and to the U.S. Mint for their hard work to make this vision a reality,” said Susan Combs, Chairwoman of the commission.