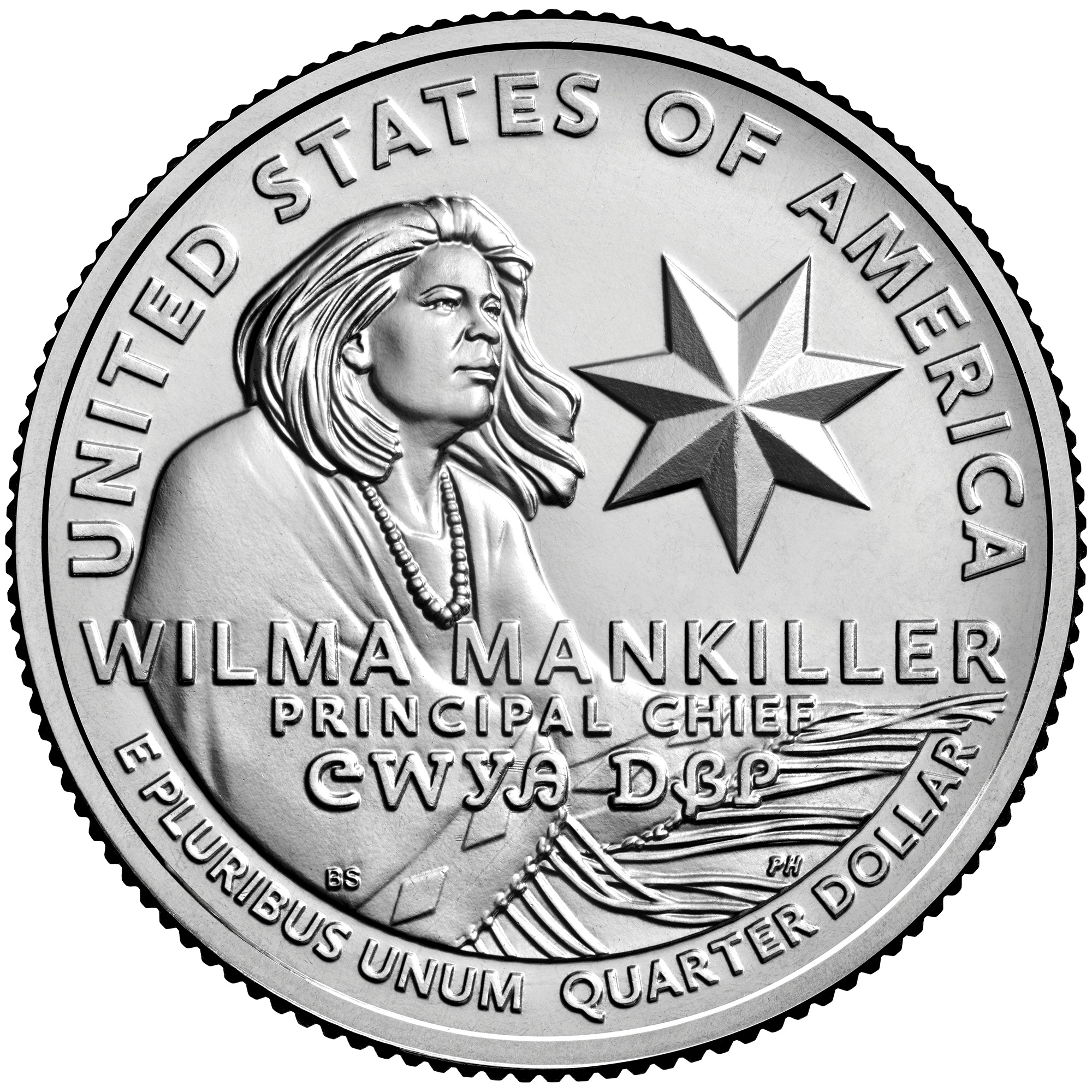 WASHINGTON – The United States Mint (Mint) has begun shipping the third coin in the American Women Quarters (AWQ) Program. These circulating quarters honoring Wilma Mankiller are manufactured at the Mint facilities in Philadelphia and Denver. Coins featuring additional honorees will begin shipping later this year and through 2025.

“It is my honor to present our Nation’s first circulating coins dedicated to celebrating American women and their contributions to American history,” said Mint Deputy Director Ventris C. Gibson. “Each 2022 quarter is designed to reflect the breadth and depth of accomplishments being celebrated throughout this historic coin program. Wilma Mankiller was a leader in the Cherokee Nation and a strong voice worldwide for social justice, Native people, and women.”

The obverse (heads) depicts a portrait of George Washington originally composed and sculpted by Laura Gardin Fraser to mark George Washington’s 200th birthday.  Though Frazer’s work was a recommended design for the 1932 quarter, then-Treasury Secretary Mellon ultimately selected the familiar John Flanagan design. Of Fraser, Deputy Director Gibson said, “I am proud that the new obverse design of George Washington is by one of the most prolific female sculptors of the early 20th century. Laura Gardin Fraser was the first woman to design a U.S. coin, and her work is lauded in both numismatic and artistic circles. Ninety years after she intended for it to do so, her obverse design has fittingly taken its place on the quarter.”

Authorized by Public Law 116-330, the American Women Quarters Program features coins with reverse (tails) designs emblematic of the accomplishments and contributions of trailblazing American women. The Mint will issue five quarters per year beginning in 2022 and continuing through 2025. The ethnically, racially, and geographically diverse group of individuals honored through this program reflects a wide range of accomplishments and fields, including suffrage, civil rights, abolition, government, humanities, science, space, and the arts. Additional 2022 quarters still to be released will honor Nina Otero-Warren, a leader in New Mexico’s suffrage movement and the first female superintendent of Santa Fe public schools; and Anna May Wong, the first Chinese American film star in Hollywood, who achieved international success despite racism and discrimination.

“Principal Chief Mankiller demonstrated that the power to change our communities is limited only by our vision,” said AIP Artist Benjamin Sowards. “She saw her people as the source of hope for the Cherokee Nation. She believed the strength of the community offered solutions to the challenges they were facing.

Numismatic Products
We invite you to learn more and enroll in the American Women Quarters Program today. Limited quantities will be produced, so sign up to ensure you receive a complete collection of AWQ numismatic products.