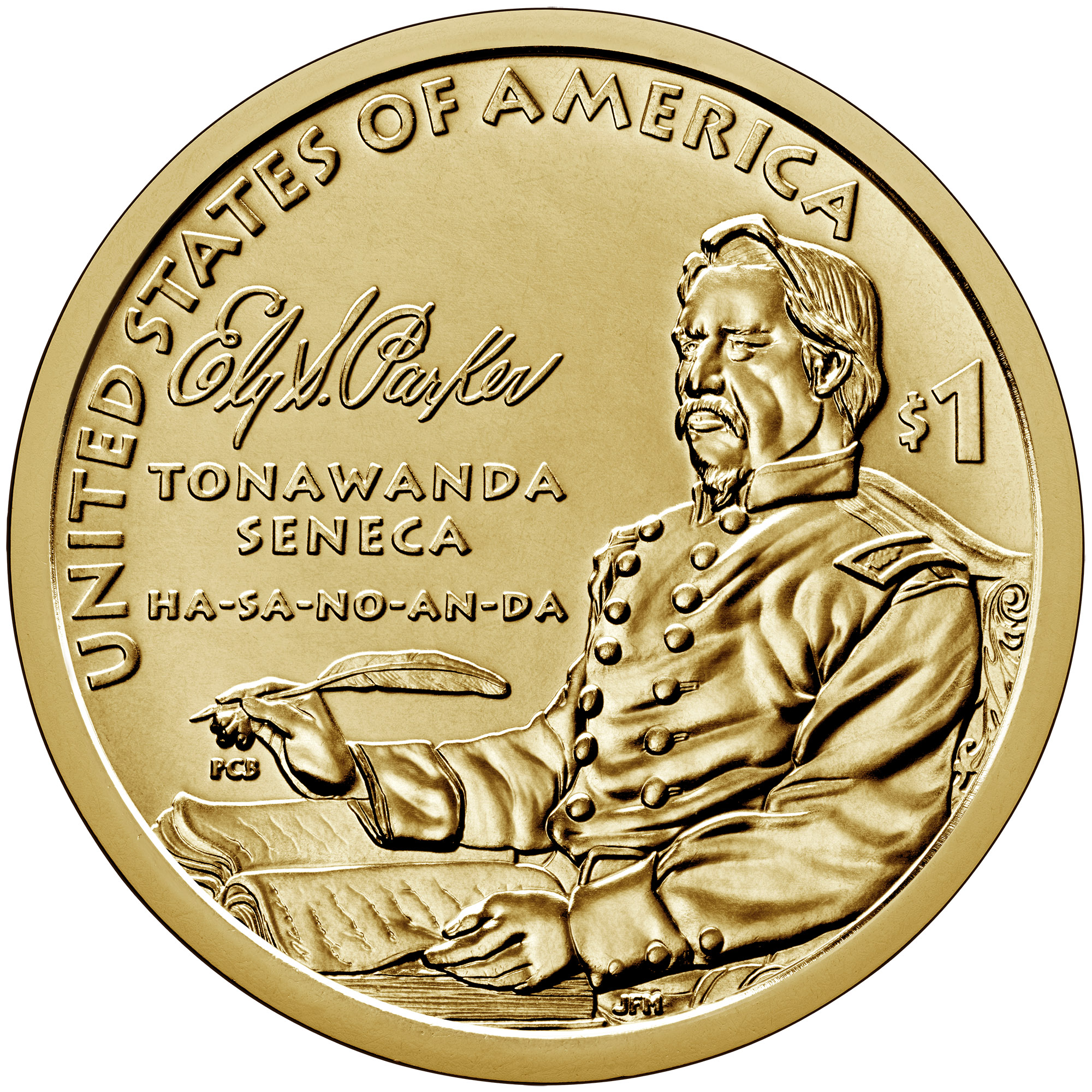 Born Ha-sa-no-an-da into a prominent Tonawanda Seneca lineage on Iroquois land in upstate New York, Parker mastered English as a youth, and served as a translator and scribe for tribal chiefs in their struggle to maintain their reservation. In appreciation, the Iroquois bestowed upon Parker their greatest honor, naming him Grand Sachem of the Six Nations and according him the sacred name of Donehogawa (Keeper of the Western Door of the Iroquois Longhouse). Commissioned into the Army in 1863, Parker attained the rank of brevet Brigadier General as General Ulysses S. Grant’s military secretary during the Civil War, helping to draft the formal surrender documents during the surrender at Appomattox. After Grant was elected president of the United States, he appointed Parker to serve as commissioner of Indian affairs, the first Native American to hold that post. He held the position from 1869 to 1871.

Available options and their prices are below.

The coin’s obverse (heads) continues to feature Sacagawea carrying her infant son, Jean-Baptiste, by sculptor Glenna Goodacre. Inscriptions are “LIBERTY” and “IN GOD WE TRUST.” The year, mint mark, and “E PLURIBUS UNUM” are incused on the edge of the coin. The 2022 Native American $1 Coin reverse (tails) design depicts Ely S. Parker in an Army uniform. Parker is shown with a quill pen and book, and a likeness of his signature, as symbols of his experience as an expert communicator, and his graceful penmanship. The inscriptions “TONAWANDA SENECA” and “HA-SA-NO-AN-DA” recognize his tribe and the name given to him at birth. Additional inscriptions include “UNITED STATES OF AMERICA” and “$1.”

Native American $1 Coin products are also available for purchase through the Mint’s Product Enrollment Program. Enrollments work like a magazine subscription. After you sign up, you will receive the next product released in the series and continue to receive products until you end your enrollment. Visit Native American $1 Enrollments | US Mint Catalog Online to learn more.