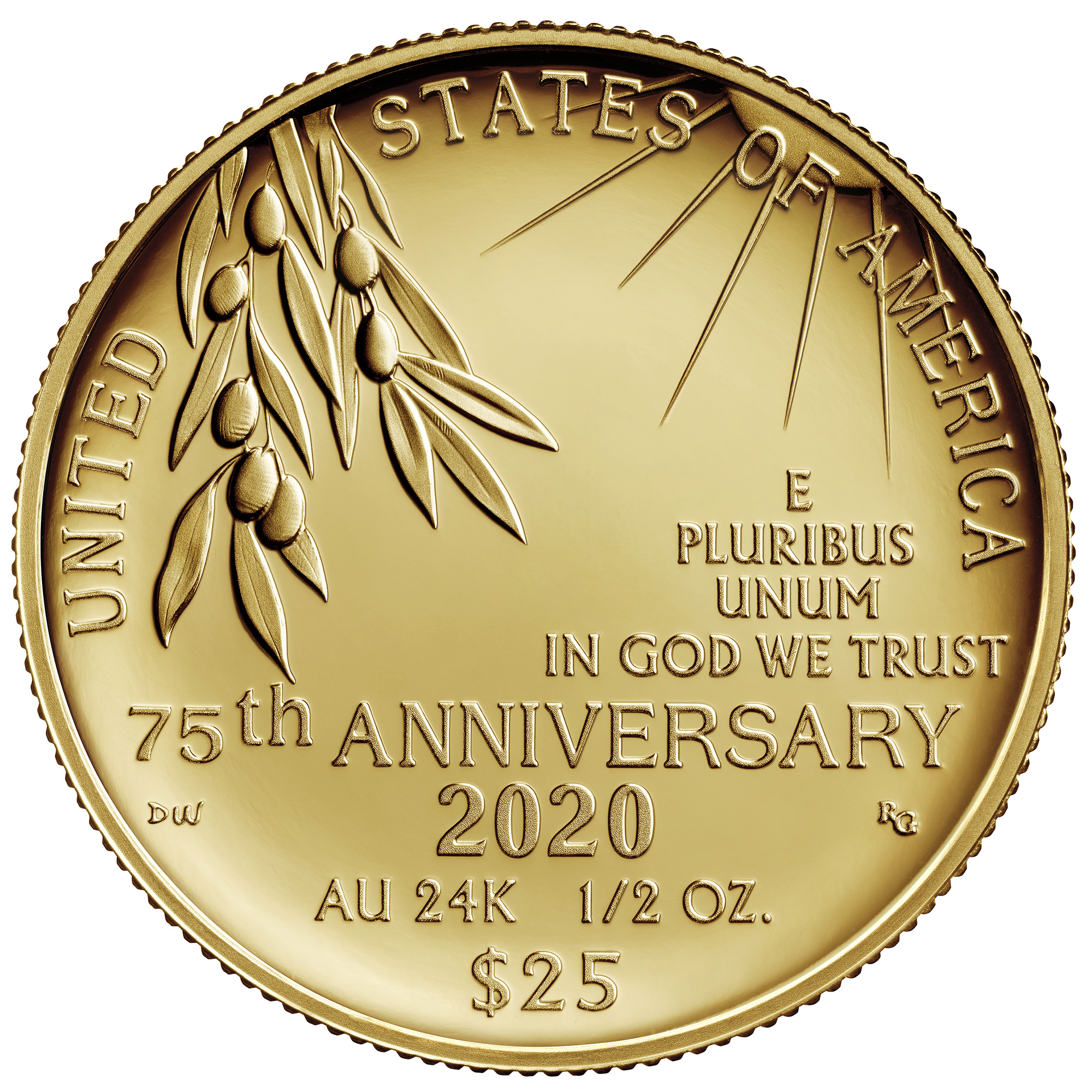 WASHINGTON– Beginning in November, the United States Mint (Mint) is releasing four products to commemorate the 75th Anniversary of the End of World War II.

End of World War II 75th Anniversary American Eagle Gold Proof Coin (20XE)
Product Limit: 1,945
Price: Per Pricing Grid
The obverse features a version of Augustus Saint-Gaudens’ full-length figure of Liberty with flowing hair, holding a torch in her right hand and an olive branch in her left. The reverse (tails) features a male eagle carrying an olive branch flying above a nest containing a female eagle and eaglets. The 22-karat gold coin is struck in West Point and bears the “W” mint mark. The coin is packaged in a burgundy velvet, satin-lined presentation case.

End of World War II 75th Anniversary American Eagle Silver Proof Coin (20XF)
Product Limit: 75,000
Price: $83.00
The obverse features Adolph A. Weinman’s full-length figure of Liberty in full stride, enveloped in folds of the flag, with her right hand extended and branches of laurel and oak in her left. The reverse (tails) features a heraldic eagle with shield, an olive branch in the right talon and arrows in the left. The coin is struck in West Point and bears the “W” mint mark. The coin is packaged in a blue velvet satin-lined presentation case.

Both coins include a special privy mark incorporated on the obverse symbolizing the 75th anniversary of the triumph of World War II with “V75.” The design outline of the privy mark represents the aerial view shape of the Rainbow Pool located at West Potomac Park in Washington, D.C., which is now an integral part of the World War II Memorial.

End of World War II 75th Anniversary 24-Karat Gold Coin (20XG)
Product Limit: 7,500
Price: Per Pricing Grid
Packaged in a burgundy velvet presentation case, this West Point-minted 99.99 percent gold coin bears an obverse design featuring an eagle in flight grasping an olive branch, symbolizing peace, in its right talon. Mint Artistic Infusion Program (AIP) artist Ronald Sanders created the design, which was sculpted by Mint Medallic Artist Phebe Hemphill. The design is inspired by the 1945 version of the Great Seal of the United States, where the eagle faces to the right, toward the olive branch. Inscriptions are “LIBERTY,” “1945,” and “WORLD WAR II.” The reverse (tails) design echoes the sun element featured on the obverse of the 1945 Victory Medal. The sun from that medal has, 75 years later, risen to noon day brilliance. It shines on the symbolic olive branches on the left. Inscriptions are “UNITED STATES OF AMERICA,” “E PLURIBUS UNUM,” “IN GOD WE TRUST,” “75th ANNIVERSARY,” “2020,” “AU 24K 1/2 OZ.,” and “$25.” AIP artist Donna Weaver created this design, which Mint Medallic Artist Renata Gordon sculpted.

End of World War II 75th Anniversary Silver Medal (20XH)
Product Limit: 20,000
Price: $75.00
This medal is produced at the Philadelphia Mint and displays the same obverse design and inscriptions as that of the 24-karat gold coin. The medal also displays the same reverse design as the 24-karat gold coin, but with the sole inscription “75th ANNIVERSARY.” The medal is packaged in a blue velvet satin-lined presentation case. A decorative sleeve and Certificate of Authenticity with WWII-related information accompanies each of the coins and the silver medal.

Sales for all products begin at noon EST on the respective dates. Orders for each option will be limited to one per household.

Note: To ensure that all members of the public have fair and equal access to United States Mint products, the United States Mint will not accept and will not honor orders placed prior to the official on-sale dates and time of November 5 and November 9, 2020, at noon EST.

On sale for two weeks each or until mintage is depleted, with shipping in October