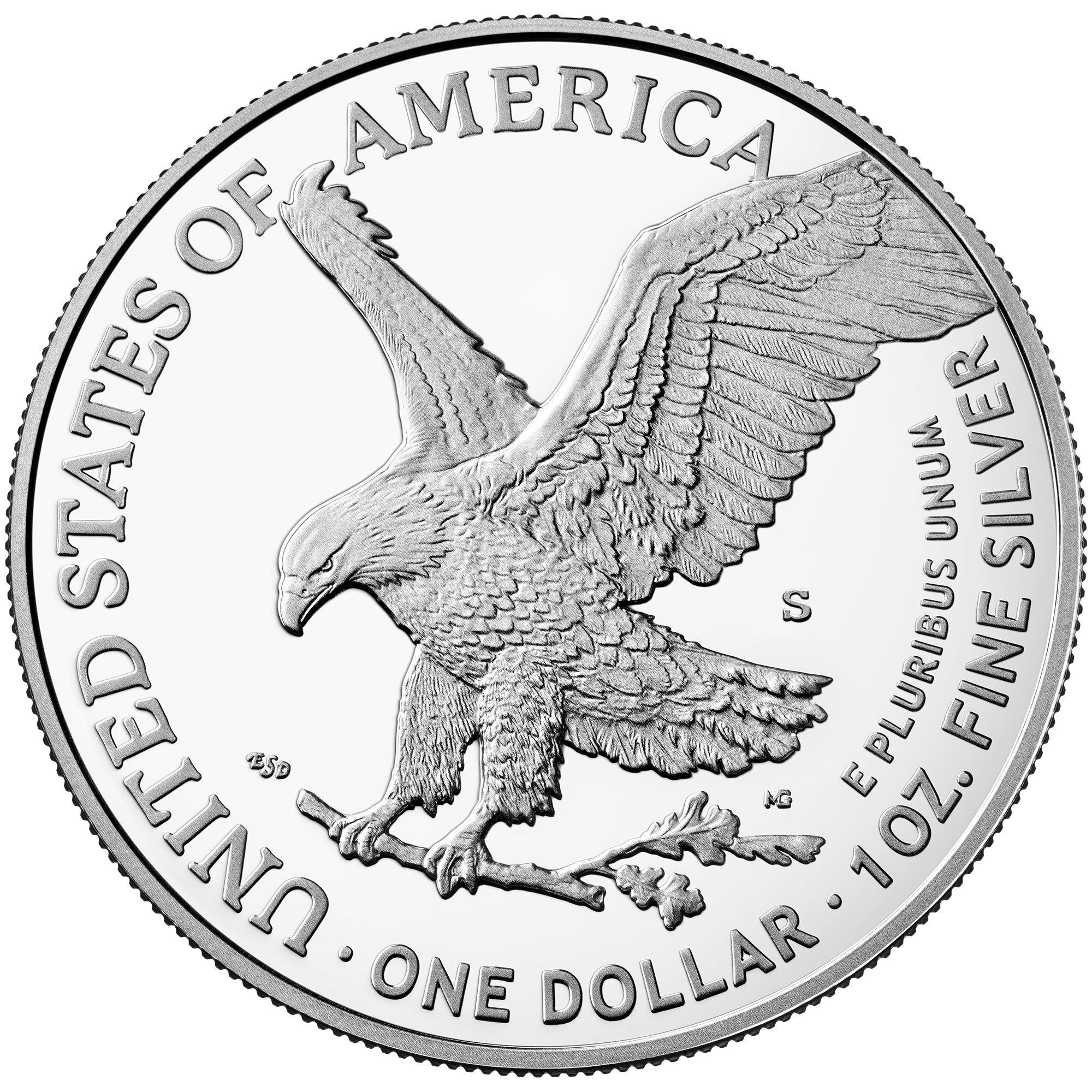 WASHINGTON – The United States Mint (Mint) will accept orders for redesigned 2021 American Eagle Silver Proof Coins from its San Francisco facility beginning on August 12 at noon EDT.  Production is limited to 200,000, with orders limited to three coins per household for the first 24 hours of sale.

Like its West Point–minted counterpart, the San Francisco-minted coin’s obverse features a refreshed depiction of Adolph A. Weinman’s full-length figure of Liberty in full stride, enveloped in folds of the flag, with her right hand extended and branches of laurel and oak in her left.  The Mint employed technological advancements that resulted in a design that is now a closer reflection of Weinman’s original vision and includes the addition of his traditional artist mark. Inscriptions are “LIBERTY,” “IN GOD WE TRUST,” and “2021.”

The redesigned reverse depicts an eagle as it prepares to land, carrying an oak branch, as if to add it to a nest.  Inscriptions are “UNITED STATES OF AMERICA,” “E PLURIBUS UNUM,” “1 OZ. FINE SILVER,” and “ONE DOLLAR.”  United States Mint Artistic Infusion Program Designer Emily Damstra created the design that retired United States Mint Medallic Artist Michael Gaudioso sculpted.

In addition to redesigning the reverse and enhancing design details on the obverse, the redesigned American Eagle Silver Coins have been minted in high detail using new technology and include a reed pattern variation.  The Mint benchmarked its efforts against anti-counterfeiting programs implemented by major mints around the world.  These new features will make the coins more difficult to counterfeit.

The 2021 American Eagle One Ounce Silver Proof (S) is priced at $73.  To set up a REMIND ME alert, visit https://catalog.usmint.gov/american-eagle-2021-one-ounce-silver-proof-coin-21EMN.html (product code 21EMN).

Additional coins in the American Eagle Coin Program are available at:  https://catalog.usmint.gov/coins/coin-programs/american-eagle-coins/.

About the United States Mint
Congress created the United States Mint in 1792, and the Mint became part of the Department of the Treasury in 1873.  As the Nation’s sole manufacturer of legal tender coinage, the Mint is responsible for producing circulating coinage for the Nation to conduct its trade and commerce. The Mint also produces numismatic products, including proof, uncirculated, and commemorative coins; Congressional Gold Medals; silver and bronze medals; and silver and gold bullion coins. Its numismatic programs are self-sustaining and operate at no cost to taxpayers.

Note:  To ensure that all members of the public have fair and equal access to United States Mint products, the United States Mint will not accept and will not honor orders placed prior to the official on-sale date and time of August 12, 2021, at noon EDT.

To reduce the risk of employee exposure to COVID-19 in the workplace, the Mint’s sales centers are closed until further notice.  Please use the United States Mint catalog site https://catalog.usmint.gov/ as your primary source of the most current information on product and service status.