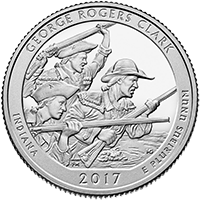 The rolls and bags contain coins that were struck on the main production floors at the Philadelphia, Denver, and San Francisco Mint facilities. The three-roll set contains coins from all three facilities. Unlike the “P” and “D” mint mark quarters, those with the “S” mint mark will not be released into circulation.

The United States Mint was created by Congress in 1792 and became part of the Department of the Treasury in 1873.  It is the Nation’s sole manufacturer of legal tender coinage and is responsible for producing circulating coinage for the Nation to conduct its trade and commerce.  The United States Mint also produces numismatic products, including proof, uncirculated, and commemorative coins; Congressional Gold Medals; and silver and gold bullion coins.  Its numismatic programs are self-sustaining and operate at no cost to taxpayers. The Mint is celebrating its 225th anniversary in 2017 (#USMint225).

Sculptor-engraver Michael Gaudioso talks about his work on the quarter.