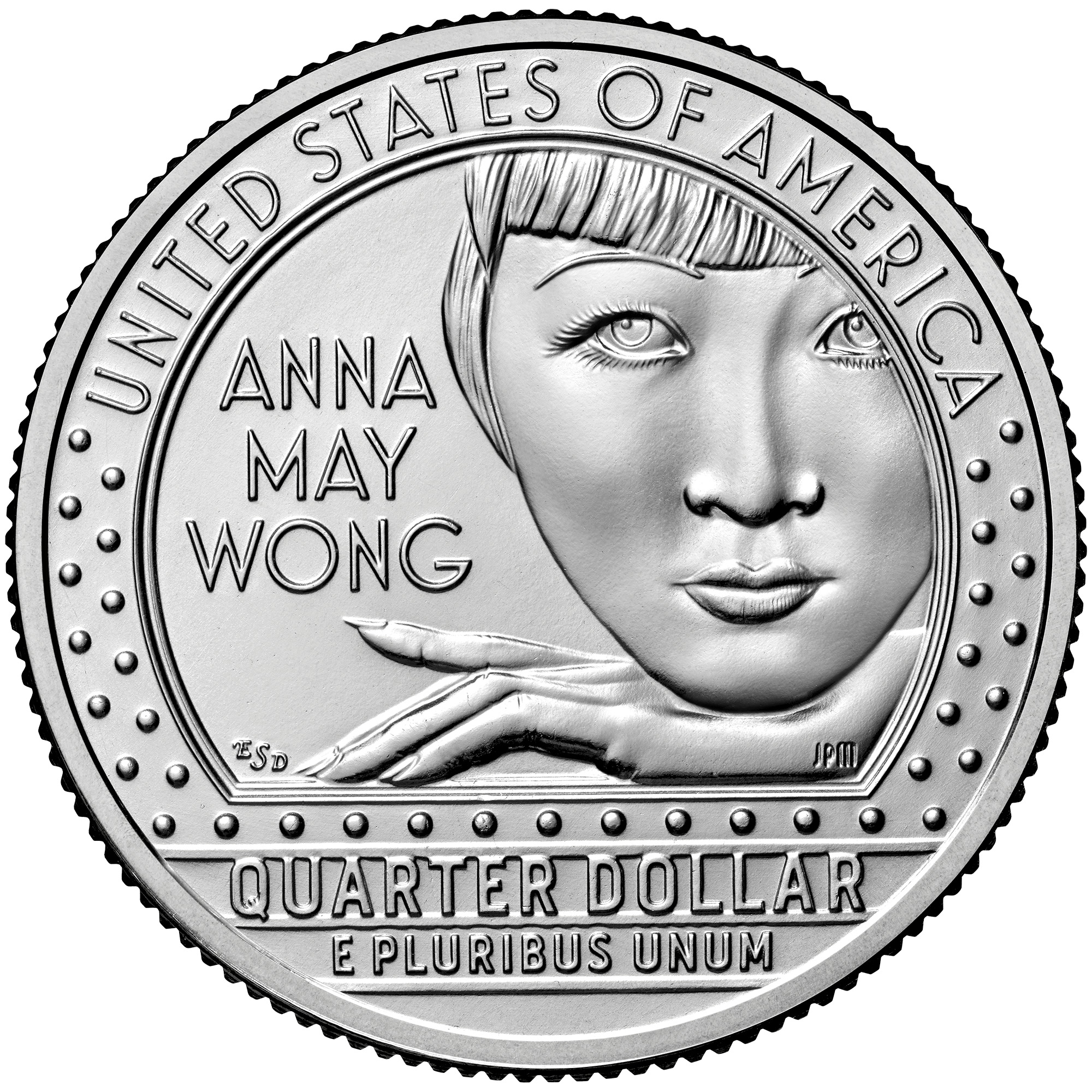 WASHINGTON – The United States Mint (Mint) will begin shipping the fifth coin in the American Women Quarters (AWQ) Program on October 24. The Mint facilities at Philadelphia and Denver manufacture these circulating quarters honoring Anna May Wong. Coins featuring additional honorees will begin shipping in 2023 through 2025.

With a career that spanned motion pictures, television, and theatre, Anna May Wong left a lasting legacy for Asian American women in the entertainment industry. She appeared in more than 60 movies, including silent films and one of the first made in Technicolor. She also appeared in productions on the London and New York stages.

“The fifth coin in our American Women Quarters Program honors Anna May Wong, a courageous advocate who championed for increased representation and more multi-dimensional roles for Asian American actors,” said Mint Director Ventris C. Gibson. “This quarter is designed to reflect the breadth and depth of accomplishments by Anna May Wong, who overcame challenges and obstacles she faced during her lifetime.”

The reverse (tails) design features a close-up image of Anna May Wong with her head resting on her hand, surrounded by the bright lights of a marquee sign. The inscriptions are “UNITED STATES OF AMERICA,” “ANNA MAY WONG,” “QUARTER DOLLAR,” and “E PLURIBUS UNUM.” It was designed by United States Mint Artistic Infusion Program Designer Emily Damstra and sculpted by United States Mint Medallic Artist John McGraw.

“Many prominent actors from the 1920s and 1930s saw their name framed by lightbulbs on movie theater marquees, so I thought it made sense to feature Anna May Wong in this way,” said Damstra. “Along with the hard work, determination, and skill Anna May Wong brought to the profession of acting, I think it was her face and expressive gestures that really captivated movie audiences, so I included these elements next to her name.”

The obverse (heads) depicts a portrait of George Washington originally composed and sculpted by Laura Gardin Fraser to mark George Washington’s 200th birthday.  Though her work was a recommended design for the 1932 quarter, then-Treasury Secretary Mellon ultimately selected the familiar John Flanagan design. Of Fraser, Director Gibson said, “I am proud that the new obverse design of George Washington is by one of the most prolific female sculptors of the early 20th century. Laura Gardin Fraser’s work is lauded in both numismatic and artistic circles. Ninety years after she intended for it to do so, her obverse design has fittingly taken its place on the quarter.”

Obverse inscriptions are “LIBERTY,” “IN GOD WE TRUST,” and “2022.” The design is common to all quarters issued in the series.

View images of the Anna May Wong quarter here.

Authorized by Public Law 116-330, the American Women Quarters Program features coins with reverse (tails) designs emblematic of the accomplishments and contributions of American women. Beginning in 2022 and continuing through 2025, the Mint is issuing five quarters in each of these years. The ethnically, racially, and geographically diverse group of individuals honored through this program reflects a wide range of accomplishments and fields, including suffrage, civil rights, abolition, government, humanities, science, space, and the arts. In January 2023, the Mint will begin producing quarters featuring the next five honorees: Bessie Coleman, Edith Kanakaʻole, Eleanor Roosevelt, Jovita Idar, and Maria Tallchief.

Please consult with your local banks regarding the availability of AWQ Program quarters honoring Anna May Wong in late October and early November.