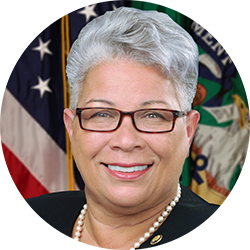 WASHINGTON – On Friday, Ventris C. Gibson took the oath of office as Director of the United States Mint. President Biden nominated Ms. Gibson on December 13, 2021. On May 4, the Senate Committee on Banking, Housing, and Urban Affairs advanced her nomination. The full Senate approved the nomination by voice vote on June 15.

Director Gibson becomes the 40th Director of the Mint. She is the first African-American to serve as Director, and the seventh woman to serve in this position.

“I am honored and humbled to be confirmed as Director of the Mint,” said Gibson. “Since joining the Mint last October, I have been tremendously impressed by the dedication and professionalism of its workforce, and the outstanding quality of the circulation coins, bullion coins, and numismatic products made by the Mint.”

Director Gibson is a U.S. Navy veteran who joined the Mint from the District of Columbia government, where she served as the Director of Human Resources. In this role, Ms. Gibson provided executive oversight and execution of human capital programs and services for nearly 37,000 employees. Prior to that, she served as Associate Deputy Assistant Secretary for Human Resources in the U.S. Department of Health and Human Services. She was responsible for the development, articulation, and delivery of Department-wide human resources policies, plans, and programs.

Director Gibson’s career with the Federal Government includes leadership roles in the Federal Aviation Administration, where she was Assistant Administrator for Human Resources, and the Department of Veterans Affairs (VA) as Deputy Assistant Secretary for Human Resource Management and its first Deputy Assistant Secretary for Resolution Management. She was the VA’s highest-ranking woman veteran and directed human resources management and civil rights programs affecting 230,000 employees.

During a career spanning more than 40 years in human resources executive and professional positions, Director Gibson earned numerous awards and commendations. She received an Exceptional Service and a Meritorious Service Award from the Secretary of Veterans Affairs, an Exceptional Service Award from the Secretary of Transportation, FAA Manager Association’s Leadership Award, National Hispanic Coalition’s President’s Award, and the Northern New Jersey Metropolitan Area’s prestigious “Woman of the Year” award.

A graduate of the Federal Executive Institute, Executive Technique, and Aspen Institute, Director Gibson attended the University of Maryland, University College. She has three children and four grandchildren.