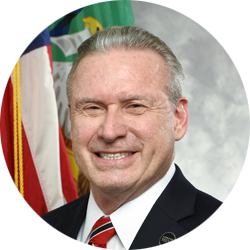 In August 2014, David Croft was appointed Associate Director of Manufacturing. In this capacity, he provides executive-level direction to the Manufacturing Directorate and the four Mint manufacturing plants. His responsibilities include maintaining a safe, healthy, and positive workforce climate and ensuring the Mint’s mission is fulfilled by sustaining effective and efficient operations.

David joined the Mint in 2007 as the Plant Manager of the Mint in Denver, CO. As Plant Manager, he was responsible for leading continuous improvement in the production of the nation’s coinage. Under his leadership, the Denver Mint achieved numerous positive changes resulting in significant improvements in workplace culture, safety, quality, delivery, and cost.

Prior to joining the Mint, David started his career with General Motors of Canada in 1977 and advanced through numerous assignments to the position of Operations Manager at the Windsor Trim Plant. He served as Plant Manager of three Delphi facilities in Flint, MI and was also Plant Manager of the Delphi Plant in Vandalia, OH.

David is originally from Windsor, Ontario and became a U.S. citizen in 2005. He holds a Master of Science in Engineering from Rensselaer Polytechnic Institute and a Bachelor’s Degree in Mechanical Engineering from General Motors Institute specializing in Electrical Engineering and Industrial Administration. He is a graduate of the Federal Executive Institute – Leadership for a Democratic Society. David and his wife Laura reside in Woodbridge, VA and have four adult children.