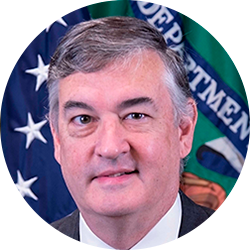 Previously, he was the Associate Chief Information Officer for IT Strategy and Technology Management in the Department of Treasury OCIO, where he has led a wide range of strategic technology initiatives.

Prior to joining Treasury, Francis was the Manager of the IT Portfolio Division for the Pension Benefit Guaranty Corporation (PBGC). He held similar duties as the Group Director for Administrative Management at the U.S. Patent and Trademark Office where he not only managed the CPIC program but also oversaw the budget, acquisition and human capital organizations within their Office of the Chief Information Officer. Francis entered government service with extensive private sector experience in financial and program management as well as in systems engineering.

He was the Manager of Performance Measurement at Nextel Corporation and had a variety of positions at Ford Motor Company including Finance Manager of International Export Operations, Manager of Global Product Development Finance, and Controller for V8/V10 Engine Product Development. Francis also held positions in system engineering and software test and evaluation for Lockheed-Martin and Accenture. He started his career as a naval officer primarily serving in shipboard engineering and operations departments while stationed in Japan.

Francis holds an MBA from the University of Maryland’s Smith School of Business and a Bachelors in Electrical Engineering from Boston University.