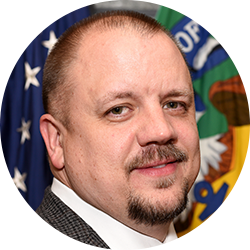 Don Bennett joined the United States Mint in 2008 as the Plant Engineering Branch Chief at the San Francisco Mint. In 2013, Don relocated to Washington, DC to work in the Manufacturing Directorate’s Production Planning Branch—a team responsible for all circulating, numismatic and bullion production. Three years later, he went on to become the Production Planning and Coin Distribution Division Chief; and in 2019, Don was promoted to his current role as Deputy Associate Director for Manufacturing.

Prior to the Mint, Don worked for a global manufacturer of water purification systems, Oasis Corporation, in Columbus, Ohio. At Oasis, Don was a Value Steam Manager responsible for various business units in the US, Ireland and Poland. Later, Don joined Pinnacle Data Systems in Groveport, Ohio, as the Global Demand Planning and Lean Manager. In this capacity he managed manufacturing planning, procurement, lean manufacturing process improvement and training for U.S. and international operations.

Don was born and raised in Columbus, Ohio. He has over 30 years of manufacturing supply chain and process improvement experience. Don is a certified Lean Manager from The Ohio State University Fisher College of Business. In addition, he is a graduate of the Federal Executive Institute – Leadership for a Democratic Society and has an Oasis Six Sigma Black Belt certification.

Don and his wife Nichole reside in Fredericksburg, Virginia, and have an adult son and three grandchildren.