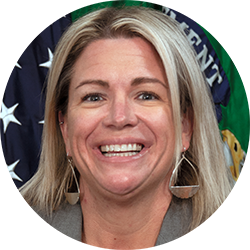 Kristie McNally joined the Mint in September 2014, and currently serves as the Deputy Director. Previously she was the Mint’s Chief Financial Officer (CFO). In this role, she functioned as Associate Director for the Mint’s Financial Directorate – which is comprised of the Procurement, Accounting, Support Services and Policy, Planning, and Budget Divisions. Additionally, Kristie provided management oversight of the Mint’s travel program. Kristie also served as Deputy Chief Financial Officer and Controller. Prior to joining the Mint, she was the Deputy CFO at Federal Prison Industries (FPI) within the Federal Bureau of Prisons.

Kristie began her federal career in 2001 as an Accountant with FPI at the Federal Correctional Institution in Milan, MI where she supervised inmates performing accounting duties while also fulfilling the obligations of a correctional worker. She progressed to positions of increasing responsibility, transferring to FPI’s Central Office Washington, DC in 2005. Kristie served in several positions, including Operating Accountant, Industrial Specialist, and Chief of Corporate Reporting before being selected as Deputy CFO. Kristie served 13 years as Federal Law Enforcement Officer before her transfer to the Mint.

She lives in Spotsylvania, Virginia with her husband and their two children.