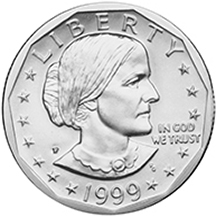 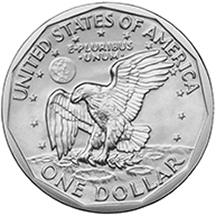 This coin featuring Susan B. Anthony was first issued by the United States Mint in 1979 and it replaced the Eisenhower Dollar. This was the first time that a woman appeared on a circulating coin. The coin was minted from 1979-1981 and again in 1999.

The obverse design features the likeness of Susan B. Anthony.

The reverse features an American eagle landing on the Moon, an adaptation of the Apollo 11 insignia.