The Restoration of the Motto 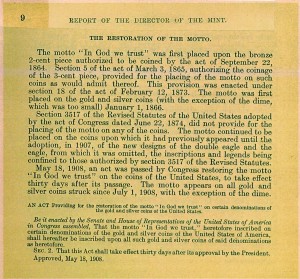 The motto “In God we trust” was first placed upon the bronze 2-cent piece authorized to be coined by the act of September 22, 1864. Section 5 of the act of March 3, 1865, authorizing the coinage of the 3-cent piece, provided for the placing of the motto on such coins as would admit thereof. This provision was enacted under section 18 of the act of February 12, 1873. The motto was first placed on the gold and silver coins (with the exception of the dime, which was too small) January 1, 1866.

Section 3517 of the Revised Statutes of the United States adopted by the act of Congress dated June 22, 1874, did not provide for the placing of the motto on any of the coins. The motto continued to be placed on the coins upon which it had previously appeared until the adoption, in 1907, of the new designs of the double eagle and the eagle, from which it was omitted, the inscriptions and legends being confined to those authorized by section 3517 of the Revised Statutes.

May 18, 1908, an act was passed by Congress restoring the motto “In God we trust” on the coins of the United States, to take effect thirty days after its passage. The motto appears on all gold and silver coins struck since July 1, 1908, with the exception of the dime.

AN ACT Providing for the restoration of the motto “In God we trust” on certain denominations of the gold and silver coins of the United States.

SEC. 2. That this Act shall take effect thirty days after its approval by the President.