The U.S. Mint launched the American Eagle Coin Program in 1986 with gold and silver bullion coins for investors. The program has since expanded to include platinum and palladium coins. The Mint also makes proof and uncirculated versions of the American Eagle coins for collecting.

The obverse of the American Eagle Gold Coins features a version of Liberty first used on the 1907 $20, or “double eagle” coin. The design, by famed sculptor Augustus Saint-Gaudens, shows Liberty facing forward, holding a torch in one hand and an olive branch in the other. Since 2021, the coins feature a newly designed portrait of an eagle on the reverse.

The obverse of the American Eagle Silver Coins uses the “Walking Liberty” design by sculptor Adolph A. Weinman from the 1916 half dollar. Liberty walks in profile, draped in the folds of the American flag. Her right arm is extended and she carries laurel and oak branches in her left. Since 2021, the coins feature a new reverse showing an eagle carrying an oak branch coming to land.

The Mint first released American Eagle Platinum Coins in 1997. The bullion coin features the Statue of Liberty on the obverse and a soaring eagle on the reverse. The proof coin design changes each year.

American Eagle Palladium Coins were first released in 2017 as bullion and 2018 as proof. Like the silver coins, the palladium coins re-create historic designs by Adolph Weinman. The obverse features Liberty wearing a cap with wings used on the 1916 Mercury Dime. The reverse shows an eagle grasping a branch first used on the 1907 American Institute of Architects Gold Medal.

American Eagle Bullion Coins provide investors with a convenient and cost effective way to add a small amount of physical gold, silver, platinum, or palladium to their investment portfolios. The gold bullion coins are available in four sizes: one ounce, one-half ounce, one-quarter ounce, and one-tenth ounce. The silver, platinum, and palladium bullion coins are available in the one ounce size.

The U.S. Mint does not sell American Eagle Bullion Coins directly to the public. Locate an authorized dealer. 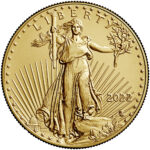 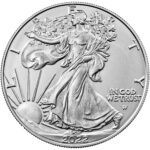 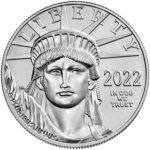 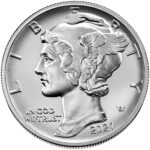 Watch the video below to learn about palladium coins.

The coins sell at a fixed price and can be purchased directly from the U.S. Mint. 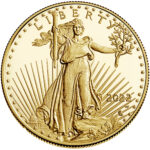 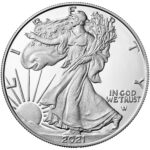 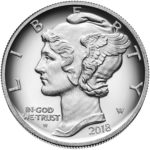 The U.S. Mint produced its first legal tender platinum proof coin in 1997. Its $100 face value is the highest denomination for a U.S. legal tender coin. Produced for collectors, it bears the “W” mint mark of the West Point Mint, where it is produced. This precious metal coin has a limited mintage and may be purchased directly from the Mint.

From 1997 to 2017, the American Eagle Platinum Proof Coin shared a common obverse that depicted the Statue of Liberty. The coin’s reverse featured a variety of themed series designs, including:

In 2017 for the 20th anniversary of the platinum proof program, the coin bore its original 1997 design. From 2018 to 2020, the Mint issued the Preamble to the Declaration of Independence Series. The obverse designs featured a different scene with Liberty each year. The common reverse showed an eagle in flight carrying an olive branch.

The 2021-2025 “First Amendment to the United States Constitution Platinum Proof Coin Series” features newly designed one ounce 99.95 percent platinum proof coins. The obverse designs use the lifecycle of the oak tree from seedling to a mighty oak as a metaphor for our country’s growth as a Nation that values freedom. Liberty grows to a thing of strength and beauty from a seed – our Bill of Rights. Each of the freedoms enumerated in the First Amendment contributes to the growth and development of the Nation.

This series continues the reverse design introduced for the 2018-2020 Preamble to the Declaration of Independence Series. It features an eagle in flight with an olive branch in its talons. 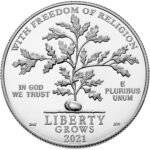 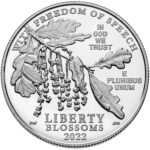 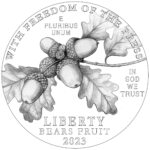 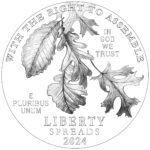 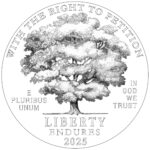