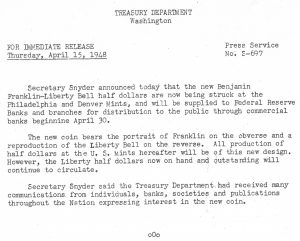 Secretary Snyder announced today that the new Benjamin Franklin-Liberty Bell half dollars are now being struck at the Philadelphia and Denver Mints, and will be supplied to Federal Reserve Banks and branches for distribution to the public through commercial banks beginnine April 30.

The new coin bears the portrait of Franklin on the obverse and a reproduction of the Liberty Bell on the reverse. All production of half dollars at the U.S. Mints hereafter will be of this new design. However, the Liberty half dollars now on hand and outstanding will continue to circulate.

Secretary Snyder said the Treasury Department had received many communications from individuals, banks, societies and publications throughout the Nation expressing interest in the new coin.