By Office of Corporate Communications
June 25, 2019 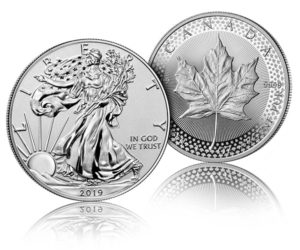 As today’s world is becoming increasingly connected, so are the opportunities to collaborate with other mints around the world. Under the leadership of Director David J. Ryder, the U.S. Mint recently announced a new partnership with the Royal Canadian Mint to issue the first-ever limited edition two-coin set, the 2019 Pride of Two Nations, available for purchase on July 3, 2019.

The set is the first joint numismatic product between the two countries, and comes with the first bilingual (English and French) Certificate of Authenticity produced by the U.S. Mint. The set commemorates the United States’ and Canada’s nationhood with coins that capture their rich history, pride, and close relationship as neighbors and partners.

Limited quantities will be available at the American Numismatic Association’s World’s Fair of Money on August 13 through 17, 2019. United States Mint Director David Ryder and Royal Canadian Mint CEO Marie Lemay will be on hand to sign Certificates of Authenticity for the set. 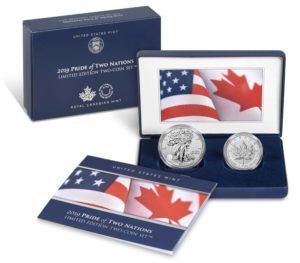 In January 2019, the U.S. Mint announced a historic collaboration with the Royal Australian Mint to produce a commemorative coin set in celebration of the historic Apollo 11 moon landing. The coin set includes two coins, one issued by the U.S. Mint and one by the Royal Australian Mint. This unique product represents the longstanding relationship between the two countries while honoring a historical achievement.

“This jointly–issued coin set magnificently symbolizes our long standing alliance and friendship with Australia,” said United States Mint Director David Ryder. “Many Americans will remember listening for the critical reports from the tracking stations in Australia at Carnarvon, Honeysuckle Creek, Tidbinbilla and Parkes, as the Apollo 11 spacecraft traveled to, orbited and landed on the Moon.”

This is not the first time the U.S. Mint has collaborated with foreign mints. The Mint consulted with the Royal Australian and Perth Mints, who provided valuable technical insight to develop curved coins for the 2014 National Baseball Hall of Fame Commemorative Coin Program.