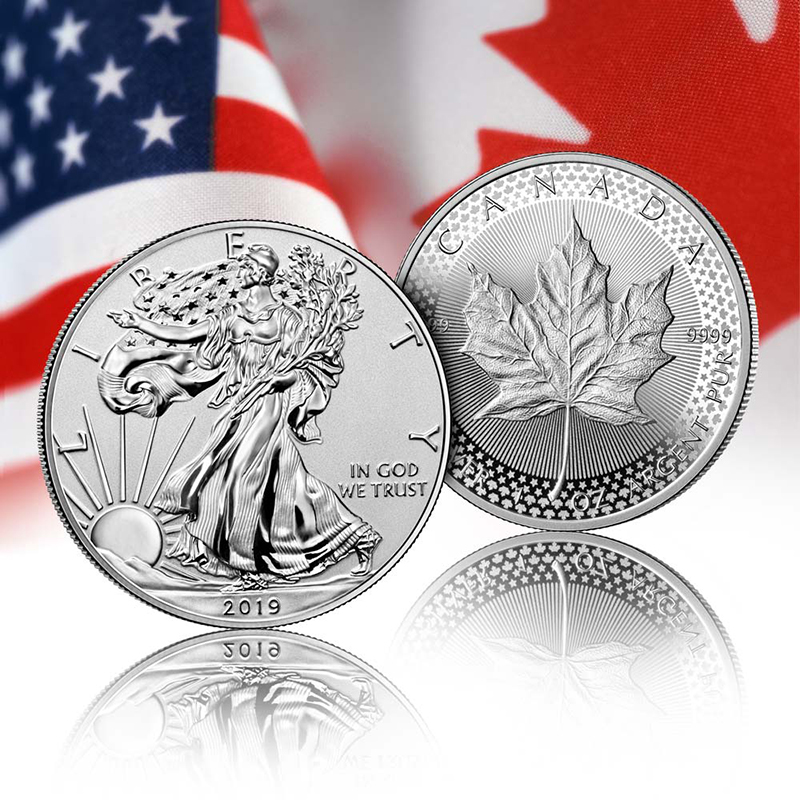 This beautifully rendered set is the first ever joint coin set between the United States Mint and the Royal Canadian Mint, and commemorates both countries’ nationhood with coins that capture their rich history, pride, and their close relationship as neighbors and friends. This numismatic product comes with the first bilingual–English and French–Certificate of Authenticity (COA) produced by the United States Mint. Mint Director David J. Ryder autographed a limited number of the COAs.

The obverse (heads) of the American Eagle One Ounce Silver Coin features Adolph A. Weinman’s full-length figure of Liberty in full stride enveloped in folds of the flag, with her right hand extended and branches of the laurel and oak in the left. The coin’s reverse (tails) features a heraldic eagle with shield, an olive branch in the right talon and arrows in the left.

These stunning coins are encapsulated and packaged in a handsome blue leatherette presentation case emblazoned with color imagery of the United States and Canadian flags on the inside cover. A classic blue outer box and matching outer sleeve cover the presentation case. A Certificate of Authenticity accompanies the set.

The Mint has priced the 2019 Pride of Two Nations Limited Edition Two-Coin Set at $139.95 USD. Customers may place their orders at catalog.usmint.gov and 1-800-USA-MINT (872-6468). Hearing- and speech-impaired customers with TTY equipment may order at 1-888-321-MINT (6468). Shipping options are available online at catalog.usmint.gov/customer-service/shipping.html.

Mintage of this historic set has been set at 110,000 units. Orders will be limited to five units per household for the first 48 hours of sales, after which the Mint will remove the limit.

Limited quantities will be available at the American Numismatic Association’s World’s Fair of Money August 13–17, 2019, in Rosemont, Ill., where United States Mint Director David Ryder and Royal Canadian Mint CEO Marie Lemay will be on hand to sign Certificates of Authenticity for the set.

About the Mints
Congress created the United States Mint in 1792, and the Mint became part of the Department of the Treasury in 1873. As the Nation’s sole manufacturer of legal tender coinage, the Mint is responsible for producing circulating coinage for the Nation to conduct its trade and commerce. The Mint also produces numismatic products, including: proof, uncirculated, and commemorative coins; Congressional Gold Medals; silver and bronze medals; and silver and gold bullion coins. Its numismatic programs are self-sustaining and operate at no cost to taxpayers.

The Royal Canadian Mint is the Crown corporation responsible for the minting and distribution of Canada’s circulation coins. It is recognized as one of the largest and most versatile mints in the world, offering a wide range of specialized, high quality coinage products and related services on an international scale. For more information on the Royal Canadian Mint, its products and services, visit http://www.mint.ca.