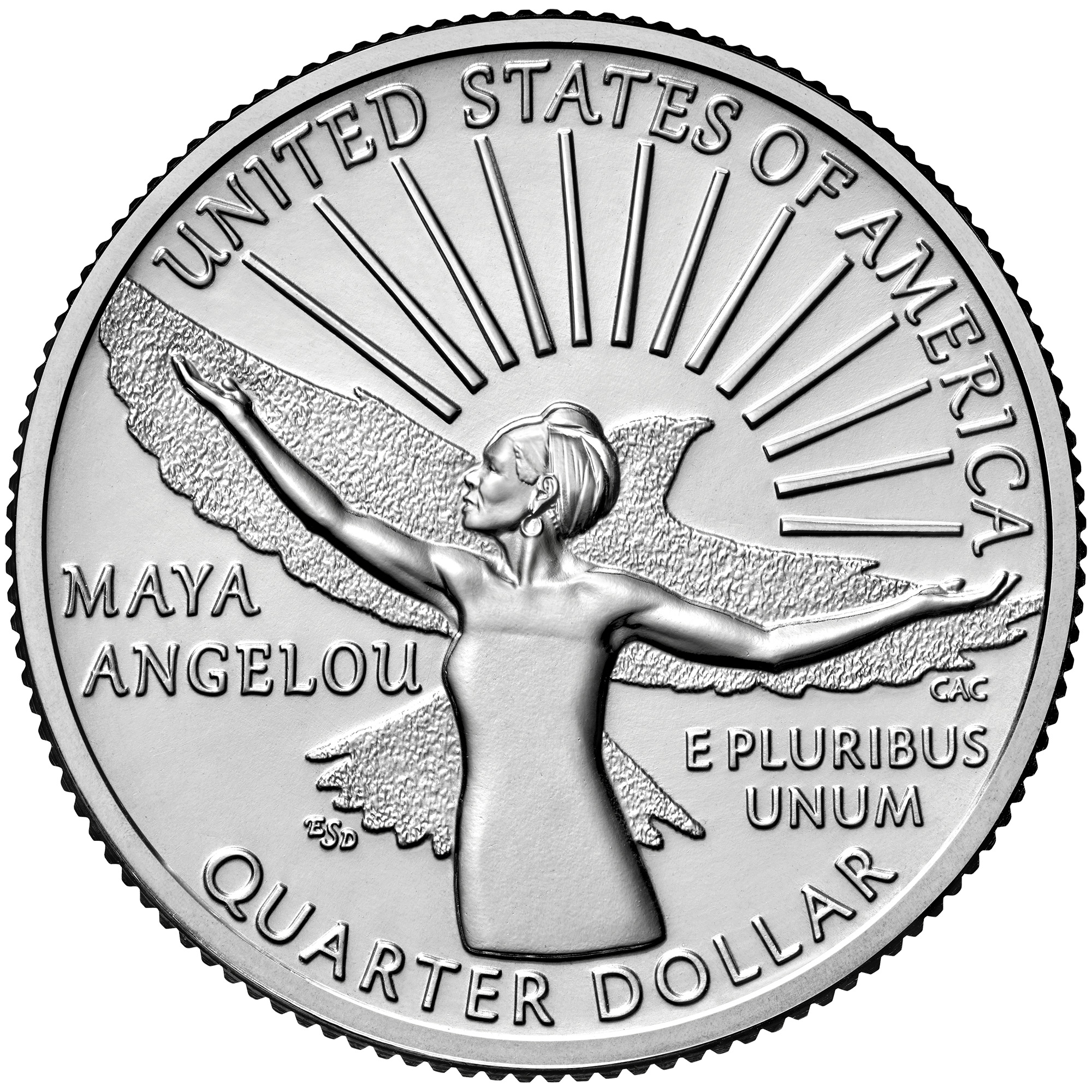 Angelou rose to international prominence as an author after the publication of her groundbreaking autobiography, “I Know Why the Caged Bird Sings.” Angelou’s published works of verse, non-fiction, and fiction include more than 30 bestselling titles. Her remarkable career encompasses dance, theater, journalism, and social activism. The recipient of more than 30 honorary degrees, Angelou read “On the Pulse of Morning” at the 1992 inauguration of President Bill Clinton.  Angelou’s reading marked the first time an African American woman wrote and presented a poem at a Presidential inauguration. In 2010, President Barack Obama awarded Angelou the Presidential Medal of Freedom, and she was the 2013 recipient of the Literarian Award, an honorary National Book Award for contributions to the literary community.

The coin’s reverse (tails) design depicts Maya Angelou with her arms uplifted. Behind her are a bird in flight and a rising sun, images inspired by her poetry and symbolic of the way she lived. It was designed by United States Mint Artistic Infusion Program Designer Emily Damstra and sculpted by United States Mint Medallic Artist Craig A. Campbell. Inscriptions are “UNITED STATES OF AMERICA,” “MAYA ANGELOU,” “E PLURIBUS UNUM,” and “QUARTER DOLLAR.”

The obverse (heads) depicts a portrait of George Washington, originally composed and sculpted by Laura Gardin Fraser to mark George Washington’s 200th birthday. A recommended design for the 1932 quarter, then-Treasury Secretary Mellon ultimately selected the familiar John Flannigan design. Inscriptions are “LIBERTY,” “IN GOD WE TRUST,” and “2022.” The obverse design is common to all quarters issued in the series.

Product options and pricing are below.

Coins in bags are produced at the Philadelphia and Denver Mint facilities. The three-roll set contains coins from Philadelphia, Denver, and San Francisco.

Purchase the rolls and bags of the Maya Angelou Quarters by visiting the product detail page.