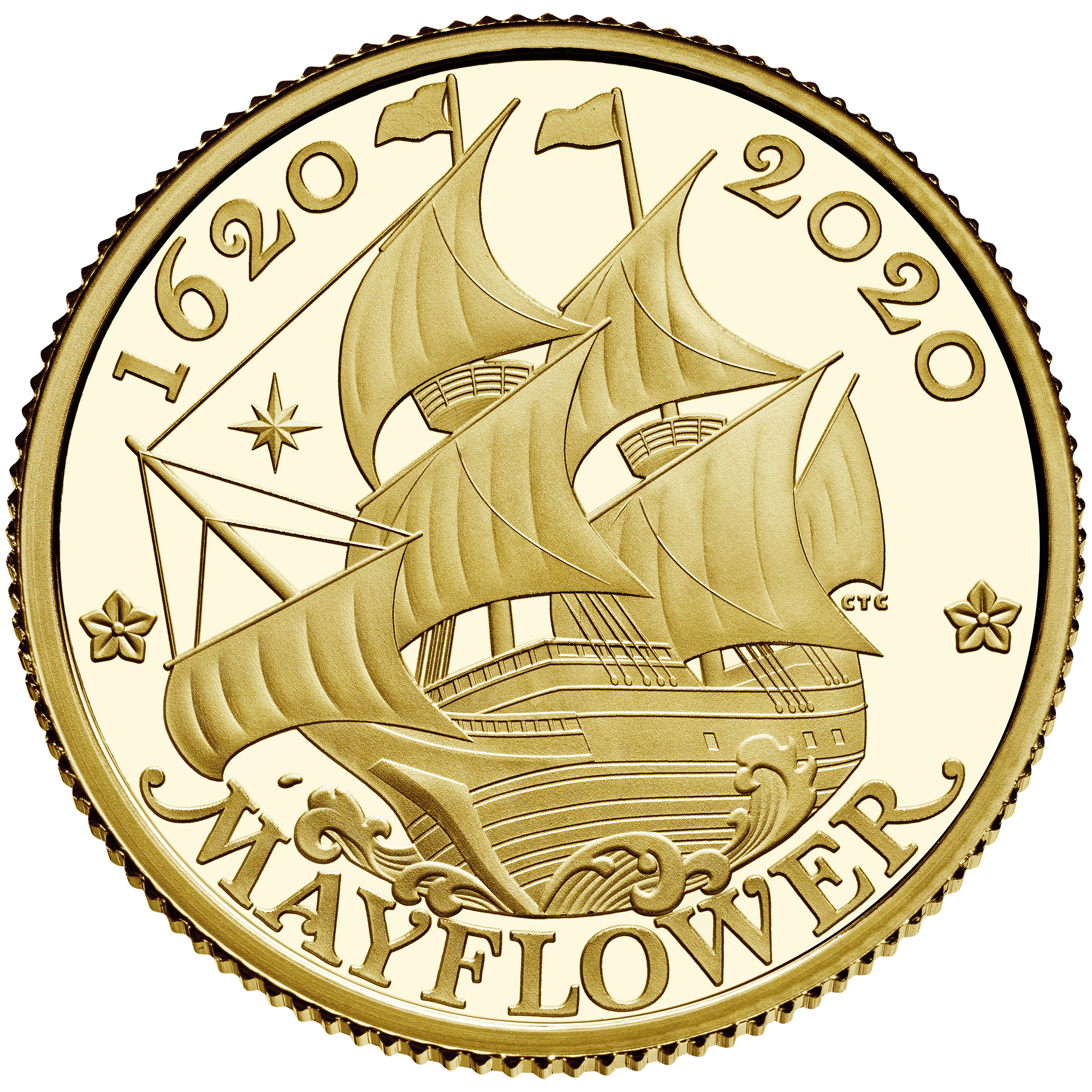 Designs–United States Mint Products
Gold Coin
The obverse depicts a Wampanoag family watching from the border of the design as the Mayflower arrives from foreign shores. A young boy steps on the border, representing the intersection of the Wampanoag people in their Patuxet homeland and the Mayflower passengers. Inscriptions are “E PLURIBUS UNUM,” “PATUXET,” and “$10.” Engraver: United States Mint Medallic Artist Phebe Hemphill.

The reverse (tails) design depicts portraits of a Pilgrim man and woman, representing the beginnings of a transition from monarchy to democracy. The dual portraits symbolize a democratic organization, with their resolute expressions focused on a self-determined future. A pair of mayflower blossoms flank the design. Inscriptions are “1620,” “PLYMOUTH,” “2020,” “IN GOD WE TRUST,” “AU 24K 1/4 OZ.,” and “UNITED STATES of AMERICA.” Engraver: United States Mint Medallic Artist Joseph Menna.

Silver Medal
The obverse depicts a Mayflower family bracing against the cold and windy weather, foreshadowing their coming hardships, while the ship is anchored in the harbor. A pair of mayflower blossoms flank the design. Inscriptions are “A CIVIL BODY POLITICK,” “1620-2020,” and “MAYFLOWER COMPACT.” Engraver: United States Mint Medallic Artist Renata Gordon.

The reverse depicts a Wampanoag man and woman employing a planting technique used to grow several crops that were staples for the Wampanoag people. This method helped keep the soil healthy, maintaining the resources for annual plantings and successful harvests. The inscription “SUSTAINERS OF LIFE” recalls not only this sustainable planting technique, but also the critical skills the Wampanoag people afforded the Pilgrims by teaching them how to successfully plant and harvest the land. The additional inscription is “PEOPLE OF THE DAWN.” Engraver: United States Mint Medallic Artist Michael Gaudioso.

Designs–The Royal Mint
The obverses of the gold and silver coins feature the fifth definitive coinage portrait of Her Majesty The Queen by Jody Clark, which has appeared on UK coins since its introduction in 2015.

The gold and silver coins reverses feature Chris Costello’s dynamic design depicting the Mayflower almost bursting out of the frame as it sails through the rough seas. This dramatic interpretation of the ship on its journey to the New World represents the unwavering determination of the passengers and crew. The design includes the inscriptions “1620,” “2020,” and “MAYFLOWER” in commemoration of the 400th anniversary.

Packaging
The coins and medals in the joint sets are encapsulated and enclosed in cadet blue presentation cases. “1620,” a mayflower blossom, and “2020” appear on the inside lid of the presentation cases, which are secured in outer packaging of similar color. An outer sleeve decorated with the U.S. and U.K. flags, United States Mint seal, The Royal Mint logo, and product names complement the packaging. The accompanying Certificate of Authenticity includes a brief story of the Mayflower departure and arrival, information about the collaborative sets, and the signatures of both the Director of the United States Mint and the Deputy Master Chief Executive of The Royal Mint. Each Certificate of Authenticity is individually numbered and with the United States Mint product, limits are noted.

The individual coin and medal product options are also encapsulated and enclosed in cadet blue presentation cases. Imagery of the Mayflower, which appears on each respective gold coin or silver medal, appears on the inside lid of the presentation case, which is secured in outer packaging of similar color. An outer sleeve with the product name in silver or gold foil complements the packaging. A Certificate of Authenticity with a brief story of the Mayflower’s arrival at Plymouth and the signature of the Director of the United States Mint accompanies the set.

Product options 20XA and 20XC will be priced according to the range in which they appear on the United States Mint “Pricing of Numismatic Gold, Commemorative Gold, Platinum, and Palladium Products” table here. The table will be updated and posted prior to product launch.

The Royal Mint will offer 500 joint gold sets and 5,000 joint silver sets in different colored packaging, which will be available for sale to their customers and distributors. The mintage numbers for the joint sets represent combined numbers for sets offered by each mint. Prices of the Royal Mint sets will vary based on their respective markets.

Ordering Details
The United States Mint will accept online orders only at the website listed below. https://catalog.usmint.gov/mayflower-400-anniversary-coin/

Orders for each product option will be limited to one per household for the first 24 hours of sales. To sign up for Remind Me alerts, visit:

For more information about this program and all products, visit: https://catalog.usmint.gov

To reduce the risk of employee exposure to COVID-19 in the workplace, the United States Mint’s sales centers are closed until further notice. Additionally, due to operational adjustments in response to COVID-19, our customer service representatives are available to assist with any questions you may have, but are unable to accept credit card information or place your order over the phone. Please use our website for all order placements at this time.

Note: To ensure that all members of the public have fair and equal access to United States Mint products, the United States Mint will not accept and will not honor orders placed prior to the official on-sale date of November 17, 2020 at 9:00 a.m. EST.