On July 3, 2007, the Secretary of the Treasury approved the final designs for the Dalai Lama Congressional Gold Medal.

State of the United States Mint

Status of the Public Enterprise Fund

The United States Mint’s Public Enterprise Fund is financed by the sale of circulating coins to the Federal Reserve and the sale of numismatic and bullion coins and other products to customers worldwide.

Year-to-Date Circulating Collections: Year-to-date circulating collections through the fourth quarter of FY 2007 totaled $1728 million – up by 36% from the same period of FY 2006. (See Table #1) This increase is attributable, in large part, to the continued increase in orders from the Federal Reserve Bank resulting from the introduction of the Presidential $1 Coin.

Year-to-Date Numismatic Revenues: Year-to-date numismatic revenues through the fourth quarter of FY 2007 totaled $563 million – up by 7% from the same period of FY 2006. (See Table #1) This resulted from an increase in the number of non-bullion products sold, including new products that were not available in FY 2006, such as the Presidential $1 Coin Proof Set™ and First Spouse Gold Coins.

Year-to-Date Bullion Revenues: Year-to-date bullion revenues through the fourth quarter of FY 2007 totaled $356 million – down by 34% from the same period of FY 2006. (See Table #1) This decrease was attributed to an overall reduction in bullion sales because of high precious metals prices.

Numismatic Fiscal Year Comparison: Numismatic revenues for the fourth quarter of FY 2007 totaled $179 million – down by 24% from the same quarter of FY 2006. (See Table #2) This revenue decrease resulted from the decline in the number of American Buffalo Gold Proof Coins sold in FY 2007, which was in its second year of issue. Normally, a coin achieves the highest sales in the first year of issue. American Eagle Proof and Uncirculated Coins did increase compared to FY 2006’s fourth quarter.

Bullion Fiscal Year Comparison: Bullion revenues for the fourth quarter of FY 2007 totaled $84 million – down by 43% from the same quarter of FY 2006. (See Table #2) This decrease was attributed to high precious metals prices, as well as the expected decline in sales for the American Buffalo Program, introduced in 2006.

Projected First Quarter Numismatic Revenues: Next quarter’s revenues are expected to increase because the 2007 United States Mint Gift Catalog will be mailed this quarter. This catalog includes the majority of the United States Mint’s products, including the American Legacy Collection. In December, another brochure highlighting five new Presidential $1 Coin products will be mailed.

Quarterly Bullion Comparison: Bullion revenues for the fourth quarter of FY 2007 totaled $84 million – up by 68% from the third quarter of FY 2007. (See Table #3) This revenue increase was a result of the seasonal demand for bullion coins.

The Idaho quarter was the third quarter of 2007, and the 43rd to be introduced in the United States Mint’s 50 State Quarters Program.  The reverse of the Idaho quarter features the Peregrine Falcon imposing its presence above an outline of the State of Idaho. The coin bears the inscriptions “Esto Perpetua” (the State motto meaning “May it be Forever”), “Idaho,” “1890,” and “2007.”

Director Moy joined Wyoming Governor David D. Freudenthal to launch the Wyoming commemorative quarter-dollar in a ceremony on September 14, 2007, at the Cheyenne Civic Center in Cheyenne, Wyoming. Pete Williams, NBC News Correspondent, served as the Master of Ceremonies for the event.

The Wyoming quarter was the fourth quarter of 2007, and the 44th to be introduced in the United States Mint’s 50 State Quarters Program.  The reverse of the Wyoming quarter features a bucking horse and rider with the inscriptions “The Equality State,” “Wyoming,” “1890,” and “2007.”

The United States Mint kicked off the fourth quarter of FY 2007 with a coin users group forum on July 12, 2007, hosted jointly by the United States Mint and the Federal Reserve Bank. Attendees included representatives from Federal entities; transit authorities; retail, vending, coin equipment, banking and armored carrier industries; and the Presidential $1 Coin Coalition. The forum provided interaction with attendees through Question and Answer sessions, presentations and panel discussions. Feedback and suggestions from attendees were compiled and documented, and this information will assist the United States Mint and Federal Reserve Bank to continue to break down barriers to the robust circulation of $1 coins.

During the fourth quarter, the United States Mint commissioned the services of the Gallup Organization to determine the level of the public’s knowledge about the Presidents through the use of a nationwide survey. This information was then used to stimulate interest in the release and use of the Thomas Jefferson Presidential $1 Coin.

The ceremonial launch of the Thomas Jefferson $1 Coin took place on August 15, 2007, with a press conference and coin exchange at the Jefferson Memorial in Washington D.C. The United States Mint reached a major milestone of approximately one billion audience impressions from the year’s outreach initiatives.

United States Mint and Federal Reserve Bank representatives delivered a presentation to members of the American Military Bankers Association (AMBA) at its annual fall workshop on September 18, 2007. This joint presentation clarified the intent of the Presidential $1 Coin Act of 2005 (Act) and allowed members of the AMBA to ask questions about their responsibilities in meeting the mandates of the Act.

The United States Mint, through the authorization granted in the Act, is honoring our Nation’s First Spouses by issuing one-half ounce, 24-karat gold proof and uncirculated coins featuring their images in the order that they served as First Spouse. The Act contains a provision to provide continuity of the First Spouse Gold Coin Program during those times in which a President served without a First Spouse.  This provision applies to Thomas Jefferson, whose wife Martha died in 1782.  The gold coins issued to accompany any President who served without a spouse feature an obverse design emblematic of Liberty as depicted on a United States coin originally issued during the President’s time in office.  For Thomas Jefferson’s Presidency, the selected image appeared on the Draped Bust Half-Cent coin from 1800-1808.

The Thomas Jefferson’s Liberty Gold Coins were released on August 30, 2007, reaching their maximum mintage numbers on the first day of issue, 40,000 total coins. The Dolley Madison Gold Coin, the last in the series for calendar year 2007, will be released in late November.

After the design narratives were reviewed by the Citizens Coin Advisory Committee (CCAC) in August, the United States Mint consulted with national scholars and historians to review the design narratives for the five First Spouses to be honored in 2009 – Anna Harrison, Letitia Tyler, Julia Tyler, Sarah Polk, and Margaret Taylor. The design development will continue according to schedule.

Educational content was added to the H.I.P. Pocket Change™ website, including the Time Machine. The interactive cartoon was updated with a trip to the World War II era. The summer edition of the quarterly online newsletter, Making Cents, was added, and the “State Quarter Day in the Classroom” page featured Idaho in July and Wyoming in September.

The United States Mint Educational Initiative team staffed a booth at the American Federation of Teachers conference in Washington, D.C., in July. The conference attracted more than 3,000 educators. More than 200 educators signed up for the Teachers’ Network.

During the fourth quarter of FY 07, the United States Mint’s licensing activities have earned royalties of approximately $55,567 and $282,800 in coin sales.

There was no new partnership activity during the quarter.

Abraham Lincoln Commemorative Coin Program Design Process
The design candidates for the silver dollar commemorating the presidency of Abraham Lincoln were developed in July-August and are scheduled to be reviewed by the Abraham Lincoln Bicentennial Commission in early October.

Louis Braille Commemorative Coin Program Design Process
The designs for the silver dollar commemorating the bicentennial of the birth of Louis Braille and Braille Literacy efforts were assigned to the United States Mint Sculptor-Engravers and the AIP artists for development in early September. The design candidates are scheduled to be reviewed by the National Federation of the Blind in mid-October.

The United States Mint website had 9,467,100 visits during the fourth quarter, an increase of 59% over the same quarter last year.  The average duration of a visit to the United States Mint website has gone up 201% in this quarter compared to the same quarter last year, from 4:49 minutes to 14:32 minutes.  In addition, there was a 177% increase in the number of repeat visitors from 342,560 to 950,160. These major increases can be attributed to the ongoing updates to current content and the creation of new content and features to the website.

The United States Mint sent the Presidential $1 Coin e-newsletter to more than 80,000 subscribers, and sent the Coins Online e-newsletter monthly to its more than 400,000 subscribers.  In addition, the Really Simple Syndication (RSS) feeds were the third most accessed section of the site.  The United States Mint added Presidential $1 Coin News and Website Updates to the RSS feed list this quarter, as RSS feeds prove to be a major vehicle for dispensing information to our visitors and customers.

The United States Mint conducts periodic product quality audits at its manufacturing facilities with a cross- functional team composed of production, quality, and administrative personnel. A statistically significant sampling of coin products is evaluated and the number of ‘defects’ found is entered into a weighted index formula. The objective of the United States Mint Quality Index (MQI) is to measure relative quality levels and detect changes and trends in quality; it does not represent a ‘percent of good products.’ The MQI is a viable metric for continual quality improvement at the United States Mint.  Opportunities for improvement have been identified. 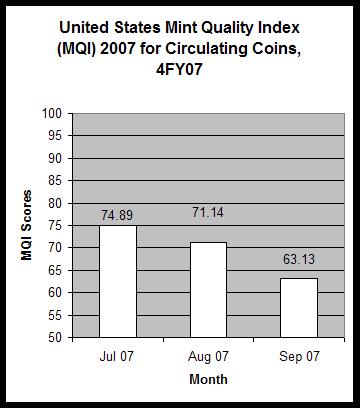 The two indicators used to measure safety are the Lost Time Injury and Illness Rate (work-related injuries resulting in time off from work) and the Recordable Injury Rate (injuries resulting in restricted work activity, medical treatment, and days away from work). In FY 2007, there were 16 lost time injuries, corresponding to a Lost Time Injury Rate of 0.88, which falls short of the strategic plan goal of 0.62. In FY 2007, there were 64 recordable injuries, resulting in a Recordable Injury Rate of 3.51, which is slightly higher than FY 2006.  The United States Mint at West Point completed its second consecutive year without a lost time accident.  In addition, two other sites experienced only one lost time injury during FY 2007. The United States Mint will intensify its efforts to resume the positive trend established over the past seven years, and will redouble efforts to decrease the number of injuries.

The Treasury Office of Inspector General (OIG) initiated a review of the Bureau of the Public Debt Administrative Resource Center’s (ARC) administration of the Workers’ Compensation Program on behalf of the United States Mint, Alcohol and Tobacco Tax and Trade Bureau, and the OIG. The review objective was to assess program effectiveness in monitoring employee worker’s compensation payments. Based on its preliminary work, which included contacting Treasury customers who used ARC services, the OIG has determined it will not continue with the workers’ compensation audit and has issued a memorandum of termination for this audit.

The OIG issued an engagement memorandum on September 17, 2007, announcing an audit of the United States Mint’s controls over production scheduling. The audit objective will be to examine how product demand is determined and how production is scheduled accordingly.