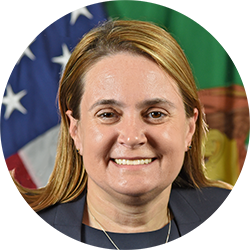 Office of Legislative and Intergovernmental Affairs

Jennifer Warren has more than fifteen years of experience on Capitol Hill and in the private sector working with leadership, stakeholders, and congressional offices in a bipartisan manner to secure legislative initiatives. Prior to taking the position as Director of Legislative and Intergovernmental Affairs at the U.S. Mint, she was the Lead Policy and Legislative Specialist at the Department of Defense Education Activity, Program Analyst for the U.S. Marine Corps, and detailed for several months to the Assistant Secretary of the Navy (Manpower and Reserve Affairs). Jennifer also worked for several years in Congress as a Legislative Director for Representative Roby (AL) and Rep. Everett (AL), Legislative Assistant for Rep. Bass (NH), and Staff Assistant for Rep. Norwood (GA). Part of her responsibilities included covering the Member’s committee assignments on the House Armed Services Committee, House Agriculture Committee, House Energy and Commerce, and House Education and Workforce. In the private sector, Jennifer was a Legislative Analyst for the RAND Corporation and the Farm Policy Reform Project Manager for forestry/conservation initiatives for an environmental advocacy group.

While earning a Master of Government Administration, Jennifer worked as the Managing Editor of the American Academy of Political and Social Science’s journal, The ANNALS, as a research assistant and teaching assistant for the University of Pennsylvania, and as a member of an assessment team to Tanzania with Women’s Campaign International. Jennifer was awarded the 2003 Fels Leadership Award, an honorary distinction from the University of Pennsylvania. Additionally, she presented work that her and fellow students did for the City of Philadelphia, which secured a million dollar grant for Fels Institute of Government to improve the City of Philadelphia’s foster care system.

Jennifer also conducted psychological research at Emory University looking at comparative cognitive development in human children and primates. She conducted research at Yerkes Primate Center with mainly orangutans and chimpanzees. Jennifer has presented her research at several international and national conferences as well as contributed to several academic published studies.